Mayuki totally freaks out -- because Akira is the one she loves, and she wanted to become a good kisser for Akira's sake! But since she can't bring herself to admit that, she accepts Akira's suggestion.

Akira has actually never kissed anyone in her life, and doesn't know the first thing about how to teach kissing. Thus, when the lesson starts, Mayuki (who has become pretty good thanks to Rin) ends up being the one giving a very thorough kissing lesson to a dumbstruck Akira.

The karmic retribution delivery boy says: "Miss Akira? One large order of humble pie for you!"

I believe this is how it's going to go.

Omg I can't believe it! Everything worked just like we expected! At least Akira is starting to actually think about things now, rather than just constantly looking down on Mayuki as inferior.

I do hope we get to see all three of them together for a while, overcoming difficulties and social stigma about being a trio of lovers.

I'm sorry y'all, I'm here for Mayuki/Akira! I would love for Akira to fall hard for Mayuki. Of course, even though I've been rooting for Mayuki x Akira from the start, I'm all for the three girls getting together as that appears to be the intention here. I'd be sad if after all this Rin ended up with no one again :(

I do hope we get to see all three of them together for a while, overcoming difficulties and social stigma about being a trio of lovers.

Like Canno totally not did in A Kiss and a white Lily ? 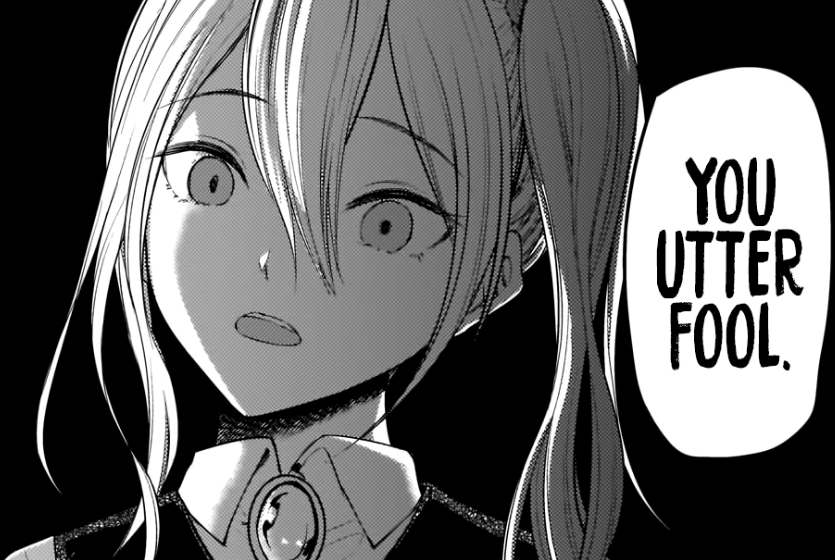 This song is for you
https://www.youtube.com/watch?v=RK_g0H6Zs1M

Since you're more experienced that I am"

"she cried in front of me"

"Akira, you don't need to hold back"

someone call an ambulance! also she completely lost with the first lesson kissing, omg that was soooooooooooooooo satisfying to see!! SO SEXY TOO ! Mayuki, I think you've learned a bit too much already!

The triangle is completed and it looks so good,Akira surrendering with her first (maybe?)kiss and Rin trying to hold back is all leading to a very incredible night once their hearts are aligned, can't wait!!!

i still hate akira for some reasons. i don’t fw her vibe smh

Understandable, this series has some of the hottest kissing scenes I've ever seen, and somehow while looking classy rather than raunchy.

Hmmm... not the biggest fan of the direction this went in. I'm sure Canno will find a way to get it to where it needs to be for the poly end, but the journey could have been better. If I may backseat write for a moment, this is the way I was hoping things would go after Ch 5:

Chapter 6 - Akira calls Mayuki out to play basketball with her and, after a while, ends up confronting her about her lessons with Rin. Both of them, of course, know nothing about how Rin truly feels at this point. She hits Mayuki with her spiel about how she is abusing her position by asking Rin for "lessons". Mayuki contemplates and ends up agreeing internally that she is in the wrong, but also ends up thinking about her failed "date" with Akira and realizes that she needs to take the initiative. Mayuki agrees to stop, but only on the condition that she can kiss Akira instead (complete bluff ofc). Akira accepts and then you just roll into the Ch 7 kiss scene, where Akira realizes she's in over her head.

Chapter 7 - Rin goes to tutor Mayuki as usual, only for Mayuki to put an end to their extra lessons. Rin is very hurt, but chooses to hold it all in and continue supporting Mayuki. She predictably has a harder time dealing with it than she thought and ends up relying on Akira, who is more than happy to get closer to Rin. Akira meets with Mayuki later and notices that she is out of it, and pieces together that there was clearly feelings between them.

Chapter 8 - Akira continues her relationship with Mayuki, while also successfully pursuing Rin. As her relationship deepens with both of them, she begins trying to understand her own feelings. This culminates in a conversation with Mayuki. She asks Mayuki if it's okay to love more than one person, Mayuki tells her yes. Akira shows a bit of reluctance to the idea and Mayuki hits her with the iconic "who decided you can only love one person?" Akira realizes that she wants to be with both of them, but that they aren't truly happy with the way things currently are. As the one who broke Mayuki and Rin up, Akira decides it's her responsibility to help them get back together.

Chapter 9 and on - Akira gets them all in a room together, and they figure out that they are all gay and all love each other. They lay out rules and boundaries, and the story can run from there.

I feel like shifting the triangle from Mayuki to Akira helps the readers get a lot more comfortable with her position in the dynamic, which has been an issue as Akira was the outsider for so long. It gives a much more natural development for Akira as the only one who was not open to poly, which also makes forming the triangle much simpler.

But at the end of the day, I'm just here for girls kissing, and DAMN am I getting that. It's enough to make a girl sweat. It's wild seeing all the comments against the poly ending. I get personal preferences, but this series spelled out the intended end game right at the start.

I can see where all those people are coming from actually, the chemistry between Rin and Mayuki is just that good.

Thank you Canno for blessing us with this, and thank you translation team for all your hard work!

We all know this is a poly manga from page 1, but the chemistry with Akira is just not there yet with either Rin or Mayuki. She's always been kinda meh to me from the start, so it'll take more chapters for me to warm up to her and it'll depend on how Canno will write Akira from now on.

I think most of us aren't against a poly end (there are sooo many manga where I wished it ended with poly), but we are just against Akira for now haha

That's a brutality right there.

Akira: "I'm gonna pretend I can teach kissing to Mayuki, even though I know squat about it!"

Akira: "I didn't think this through!"

Lol I didn't even know that was a trope.
Akira should be named official poster girl for that trope. Omfg, Canno's a mad genius. Hold on, I gotta go off for a hot minute.

Top-left panel of this page. Mayuki and Akira are depicted above the knees so we can see their heights. Mayuki is self-conscious about her height, it being tied to her feelings of insecurity about her basketball skills and assumed immaturity. Akira is taller, being older, in the next "tier" of school, better at basketball, and "mature." These are all qualities Mayuki desires for herself so she can be an acceptable partner for Akira. I might be reading too much into this next point, but there's a little foreshadowing in their positions. Japanese text reads right-to-left so Mayuki is "in front of" Akira, even though Akira is assumed to be "better" in all respects. Akira is even patting her head like Makuki's a child. Through her actions and her speech, it's clear that Akira views her as a kouhai and not as a peer like Mayuki wants to be.

Bottom-left panel. This is a two-page spread with the panel in question going across both. For pages up to the point, Akira has gone from in front of Mayuki, to stopping, to being surpassed by her. This progression is shown by looking at their feet. Reading from right-to-left, Akira is not only behind Mayuki, but on the previous page. She near the end of her page, stopped, while Mayuki is about to walk onto the next turn.

In chapter one, and up until this point, Akira has always viewed herself not only superior to Amyuki, but "out of her league." She viewed Mayuki as a child, maybe a protege, a cute friend who doesn't need to be taken seriously. It's in this moment where she realizes that she's been underestimating Mayuki. Mayuki is her romantic rival, in her eyes, and now must be taken seriously. But she's having doubts.

Mayuki proves to be a better kisser than Akira. She's physically overwhelmed, but also emotionally, collapsing to the floor. The positions of the two have now switched from #22 of ch1. Akira is below Mayuki and on the left side. I think this might imply that it's her turn to develop. This is the start of her arc where she needs to realize what she wants and her place in the lives of Rin and Mayuki.

Akira's perspective is solidified with her shock in this page and the final line: "she was supposed to be a mere 'junior'..."

I think Canno is an incredible writer and really knows how to use both text and visuals to convey the narrative. The symbolism here is really impressive and I just had to gush for a bit. When I got to that two-page spread, I was dumbstruck. It really shows what the comic medium is capable of in storytelling.

The story's progressing at a pretty good pace.

Holy shit. I've been thinking about what the next yuri manga to live up to the genius and top-notch quality of Bloom Into You might be, and this is it right here. It's SO unique, engaging, thoughtful, and carefully planned out (all things that made YagaKimi great), and the kiss scenes are HOT as FUCK while still managing to be tasteful and not fanservice-y. The potentially controversial subject matter is so expertly handled, as well.

This has my vote (not that there is a vote...or idk maybe there is) for the next yuri manga anime adaptation. It would make such a solid foundation for an anime, and I think it could rival YagaKimi in quality and popularity.

Holy shit. I've been thinking about what the next yuri manga to live up to the genius and top-notch quality of Bloom Into You might be, and this is it right here. It's SO unique, engaging, thoughtful, and carefully planned out (all things that made YagaKimi great), and the kiss scenes are HOT as FUCK while still managing to be tasteful and not fanservice-y. The potentially controversial subject matter is so expertly handled, as well.
This has my vote (not that there is a vote...or idk maybe there is) for the next yuri manga anime adaptation. It would make such a solid foundation for an anime, and I think it could rival YagaKimi in quality and popularity.

That's a very bold statement where you're on your own. I think you overestimate very heavily the story . To me that's a average to good yuri. That will probably sell normally for a yuri and that's all. Just because you love it doesn't mean everyone is the same.

progression intensifies
This ones up there with Crescent moon and doughnuts in terms of best romance Yuri for the year. I was enjoying the adult life genre more but this has enough complexity story and subject wise to overlook the schoolgirl Yuri trope!