Nice parallels being drawn between Nadeshiko’s gf and Kyouko

Chiming in as a poly person: I think Risa definitely reads as poly to me. And while intentionally stoking your partner's jealousy is a dick move, I think Risa didn't quite understand how much it was hurting Yuka. Risa is both less likely to intuitively understand the intensity of a mono person's jealousy and she probably assumed that Yuka was being honest about being ok with Risa being poly.

If Yuka doesn't communicate, then Risa will have a much harder time understanding just how much Yuka's jealousy hurts.

Also, given the fact that Yuka agreed to date Risa despite knowing how Risa is, whether Risa was actually seeing other people or not is unimportant. The fact that it took so long after living together for Yuka to actually confront Risa is at least partially on her.

Yeesh, Hiiragi owes her sister a massive apology. What an asshole.

Joddascus
Our Days Under One Roof discussion 02 Dec 12:47
Quote

Reading this makes me reflect on all the little things I like about living with my partner. The dorky couple energy is contagious lol

Also, I realize that the original love interests are far away, but it’d be fun to see them shipping the main couple or making do with each other

I, for one, am rooting for the forbidden triad ending!

Except Liz is trying to go back with Maki only because her first choice ended up being a asshole. This isn't character growth. This is just Liz being a selfish piece of crap. Had she really learned from her mistakes, she would have left Maki move on from all this crap. If she really cared about Maki, she would get the hell away from her.

If Maki tells Liz to leave her alone or that she wants to move on, then Liz doing so would show growth. Given that she didn't, I think Liz coming to her with an apology and accepting Maki's response is better than just vanishing without any communication.

As to Liz being selfish or not, I think that Liz deserves to be happy. That shouldn't infringe on Maki's own right to happiness, but I don't think Liz shooting her shot for a second chance is morally reprehensible.

The problem with this is that the deep trauma she endured which caused her to behave as a borderline psychopath is being dumped in high school. I am not saying that such an experience is a pleasant one, or that it leaves no emotional scars, but I am saying that the levels to which she is traumatised are way, waaay too high for such an affair.

Just to illustrate my point, let us return to one of the earliest WHAT THE FUCK moments, the earrings. Maki gifts Liz some nice earrings. Liz suffers a mental breakdown, because it is a deep trauma (let me reiterate, all of this stems from being dumped by her high school girlfriend). Maki proceeds to apologise (for doing nothing wrong, she had no way of knowing that particular shape of earrings had any sort of traumatic meaning for Liz). Liz responds to the apology by slapping her, because that is what a mentally stable person does under such circumstances. And Maki's first thought afterwards is whether or not Liz is alright, because of course a chronic doormat like her would think that.

Liz is being a "victim" of a failed high school romance, for which she proceeds to vent in massively disproportionate ways on people who did her nothing wrong and showed her only kindness and love. She is not exactly the shining example of a flawed but sympathetic character that makes you root for her happiness.

I don't think there's any amount of trauma that makes Liz's behavior towards Maki justified. I find it just as compelling and believable that a mundane event had such a strong effect on Liz.

I don't think Maki's apology is framed as a "correct" response, either. Her character arc is learning to value herself. She's not at fault for what's happened to her, but she needs to learn to assert her worth and boundaries.

Maki doesn't have any obligation to forgive Liz or even hear her out. A good ending to the story could be Maki choosing to cut Liz out of her life completely.

I just don't think that's the only satisfying ending to their story. Maki forgiving Liz on the grounds that Liz needs to do better and fix her shit wouldn't compromise either character arc in my opinion.

Now, whether or not that could be executed in a satisfying way is going to at least partially be down to taste. I don't think it's too late to show them doing the work and earning a happy ending together, but that would require breaking out of the soap opera vibe we've got going right now.

So yeah, if you wouldn't forgive Liz in that situation, that's that's 100% justified. But I don't think it's a weaker choice for Maki to forgive her.

Truly I don't understand people's hate for this series. Liz needs an arc!

The author started her with unprocessed baggage that's festered into a driving bitterness that leads to her hitting rock bottom by her own actions. To me it's more meaningful that she actually did a cruel, unjustified thing because of the scars of her previous relationship.

It seems that some people have designated her a "bad person" who doesn't deserve redemption or happiness out of some sense of punitive justice. I think she's a product of her environment and her own anxiety about being vulnerable. This doesn't justify her behavior, but it means that she's capable of being better.

I want to see her get better by realizing that not everyone she opens up to is going to hurt or abandon her. She can still fuck up and deserve happiness! She has to learn to do better by being hurt and seeing the consequences of her actions hurting others.

The thumbs up lol

I really like this ending! I think having a kid is consistent with Arisa’s wants and shows a realistic, undramatic solution to the question of how to do it.

Also the conclusion with old Arisa reminds me of the video game Soma, except that Arisa is too positive to succumb to existential dread lol

Now that you say it, it does feel familiar…

Joddascus
There's a Ghost behind that Gyaru discussion 19 Nov 14:04
Quote

The dad feeling left out but absolutely determined to participate lol

Oh hey, I remember this series. I remember dropping it cause something about it rubbed me the wrong way. It's been so long I don't remember what it was though.

Suppose I'll get to refresh myself as the chapters go up here.

It might've been that Rival-san was creepy and hard to root for in the web version. Although, the serialization made her characterization more clumsy-in-love and significantly less scummy.

Joddascus
The Two of Them Are Pretty Much Like This discussion 21 Oct 00:49
Quote

Joddascus
I Don't Know Which One is Love discussion 17 Oct 11:04
Quote

Wait, each of the girls represents one of the five senses! That's a fun bit of theming for a harem 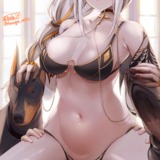 Truly the Rider class is made up of Riders!

Joddascus
The Two of Them Are Pretty Much Like This discussion 13 Oct 20:15
Quote

When they started talking about their body moving how they wanted feeling good , I thought it was pretty trans of them. Then Sakuma just fucking asked lol

Joddascus
I Don't Know Which One is Love discussion 21 Sep 00:14
Quote

I’m personally rooting for the teacher because the adult onee-san type so rarely wins. That’s only if poly’s not on the table, though lol

A gay version of The Kiss!

Joddascus
That Time I Was Blackmailed By the Class's Green Tea Bitch discussion 06 Sep 10:00
Quote

I love the mom trying her best to support Tong Tong! She’s even broadening her (smut) horizons to understand better lol

Every chapter of this manga really tests my tolerance for cringe, but I think that is an intended effect lol

To be clear, I really like this manga, even if it destroys me with secondhand embarrassment