Megumiaki
Teacher, Go Out with Me! discussion 23 Jul 17:19
Quote

I'll be a bit harsher than previous commenters - the translation is pretty bad, sorry about that but this is my opinion after reading it. I don't buy that the lack of a proofreader is the reason, this feels like the whole sentences would have to be rewritten so things make sense.

I mean, I would probably understand what is happening just with pictures and without text so it's a low bar to clear. What I mean by "making sense" is that the whole thing is just torture to read.
... but even then, that whole bit on the page 16 with "why don't I listen to anything" just makes no sense to me. Why are they talking about "listening"? A student listening to a teacher maybe, but I don't get what does it mean in context.

Looks like a mistranslation. The verb 聞く (kiku) means both "to listen/hear" and "to ask (a question)". It seems like the teacher was probably wondering why her student hadn't asked her about an answer to her confession. Just replace "listen" with "ask" in the lines that have it to make it make a little more sense.

The idea for a proofreader is that the text was perfectly readable in Japanese to Japanese readers, so the English should be just as readable to an English-reading audience.

This is what I've seen referred to as "equivalent experience" in the Japanese>English translation industry, and it's probably the most important guideline for a translator to follow. The goal of translation is not to convert all of the words in the source text to words in the target language, it's to provide an experience to readers of the translated text that's equal to the experience of native readers of the original. 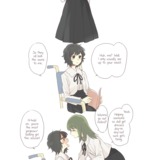 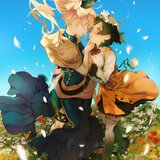 I personally am really enjoying the anime (haven't quite finished it yet). It's a very interesting concept, and the action and plot are engaging.

Just caught up on all the post-anime chapters after binging Season 2, and holy shit this manga is insane. I have to say, I was not expecting Watermelon Hitler. The way this series manages to have an incredibly well thought-out, engaging plot while also being hilarious and endearing makes it a true masterpiece in my mind. All it needs is a ShamiMomo kiss to cement it as a legendary work of art!

I was kind of hoping that Lily would open her eyes in the afterlife and see Heath for the first time and say "You're beautiful" or something like that, but it was still a tear-jerker regardless. This manga is legendary.

Few things have made me actually say "what the fuck am I reading" out loud. Homura turning into a mermaid was one of those things.

I knew that hat was sus

Perfect for each other haha

This is S-tier diabetes.

Couldn't have said it better myself. It's taking all my willpower not to squeal out loud while my roommate's in the room. 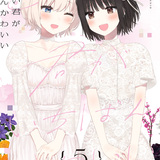 I mean, Happy Sugar Life got an anime, and this is a pretty similar level of fucked up (maybe a little more), so it's not impossible. I think it's definitely a story that deserves telling.

They were simultaneously perfect for each other...and each other's demise.

Those last two pages are some of the most impactful manga pages I've ever seen. What an incredible, fucked up work of art. 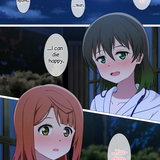 I like to think that Yu knew exactly what Ayumu meant in this scene, and her replying "yeah" was her way of saying "me too".

That was so good! I loved the way they just came out and said "I love you" with no hesitation at the end. Just beautiful.

It was so cool to see a manga with such a major focus on aro/ace characters, and I think it was executed very well. I thought it was pretty funny when I was reading through the early comments here, because everybody had zero confidence that they would actually stay ace by the end of the story. They all seemed to think that Matoi was just mistaking being a lesbian for being ace, but I imagine they must have been very pleased with how it turned out, just as I was.

This love story is so brilliant and unique. I don't think I've ever seen anything quite like it. It did an excellent job of portraying the affection and personal connection that can develop even between people who don't experience sexual attraction or don't have a desire to pursue a romantic relationship. Like with many sexual orientations and gender identities, I think there's a lot that people don't know about being aro/ace, and this manga helps to shed some light on what that's like.

I think I partially disagree. I actually feel as though the last several chapters have been very thematically consistent: there's a big overarching theme going on right now about "what am I going to do with my future after high school?" It seems to me that Saburouta knows what she wants to do with the story; the question is whether or not she's going about it in the right way.

I agree that progress has been pretty slow, and this chapter did feel like a bit of an unnecessary detour. I've personally been waiting for more HaruMatsu, but that seems a long way off right now. I'm just trusting Sabu's judgment for now and hoping that everything falls into place soon.

This manga is a work of art. Incredible stuff. Miyaji's journey is beautiful, and we got an actual yuri couple on top of it all.

That last panel of Chapter 20, with the closeted girl classmates secretly being happy about the kiss was a nice touch.

For whatever reason, that Thank you from the one girl really hit home for me. That feeling of validation can be an incredibly powerful thing.

Ah yes, let us stand in between this curtain and this window that opens out into the schoolyard so that no one in this empty classroom can see us

Ah, mob as in "background character", not "gangster" lol

Woah guys check it out a new bonus chapter just dropped on the Chaosteam Facebook page!

It's notable that the flashback of Yuzu crying is to Chapter 23 of the original series, which leads directly to the crucial turning point of Chapter 24. Yuzu's second encounter with the Shitty Homophobic Middle-School Gyarus (they also appear in panel 1 of Chapter 1) led to Yuzu rethinking, and almost giving up, her whole romantic relationship with Mei, and it's Mei's mature, considerate response in reminding Yuzu that "There is no right answer--we only do what we want to do" that results in the two of them agreeing to be together in a loving relationship going forward.

I went back and reread Chapter 23 when I was working on the translation to see what Kana and Manami's last appearance was like, but I didn't continue on to Chapter 24. Your comment made me realize something I missed in this chapter: on Page 007, Yuzu's line in the second-to-last panel is that quote you mentioned from citrus Chapter 24, which was translated then as "There is no right answer. We only do what we want to do." Not realizing this, I translated it here in a way that I felt fit the situation. She's actually repeating the words that Mei said (wrote) to her back then to give herself courage. It's not a huge deal, and the meaning is still more or less there, but I wanted to at least call attention to the fact that those lines are the same. Thanks for helping me realize that, haha.

We haven't seen you in like, a year or something, right?

I actually think I liked Mei better in this chapter too. I think her strictness is a clear sign of how much she genuinely cares about Yuzu's future. She left Yuzu with lots of advice and well wishes at the beginning of the chapter, and she's strict with her at the end because she wants Yuzu to succeed at her exams so she can pursue her dreams. She's not being controlling, she's being helpful (especially considering how busy she already is on her own). Mei's characterization is certainly subtle, perhaps more so than it used to be, but it looks like it might be headed in a better direction. I do hope she continues to develop and become more outwardly affectionate in the future. (I got a good chuckle out of the literal Robo-Mei in this chapter, lol.)

I just want to add that "Wanna come with?" is like, a thing. It's a set phrase that exists in modern colloquial English, and it's simply a contraction of "Do you want to come with me?"

It may not technically be grammatically correct, but we say grammatically incorrect things all the time in casual speech, a fact that has been reflected here in the translation.

"What does bread gag mean?"

I'll be honest, I have absolutely no idea what Harumin could have meant with that "I have a lot to learn" Matsuri's reaction the the cat was cute tho

It's an expression of admiration towards..."someone" (either Yuzu or Matsuri). Which "someone" is left intentionally ambiguous in the original Japanese, so I had to get extremely creative with the translation to maintain that ambiguity while preserving as much of the original meaning as possible.

Personally, I think she's talking about Matsuri. She envies and admires Matsuri's boldness and willingness to take action (which she demonstrated this chapter with her brazen gift and constant teasing). A lack of direction in her life seems to be Harumi's chief issue throughout the last few chapters, so I think she envies Matsuri here in much the same way she envies Maruta (and wishes she could be more like that herself, hence the "I have a lot to learn").

However, I also think that Matsuri thinks that Harumi is talking about Yuzu with this line (which is one of the main reasons it was so difficult to translate). Matsuri seems to be convinced that Harumi has feelings toward Yuzu (whether this is true or not, we still don't know for sure), and she teases and prods her about it on multiple occasions this volume. She expects words of admiration like that to be referring to Yuzu, not to her.

This is just my perspective from having read the original and having paid close attention to the interactions between these two during the chapters I've worked on. It's still left up to interpretation by the author, and more information will likely surface in Volume 5.

Is there a reason this is marked as Completed? Looking at the author's Twitter, it looks like there are at least 45 chapters out currently. Chapter 31 also definitely doesn't feel like the last chapter.