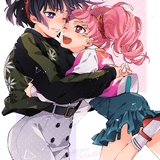 ^
True, it was all about Haruka and Michiru in that arc, but there was a second nice pair right under everyone's noses.

BeanBeanKingdom
The Two of Them Are Pretty Much Like This discussion 22 Feb 14:36
Quote

Have you watched the first six episodes of Vlad Love? They were released in bulk three days ago. I whole-heartedly recommend it if you like comedy in the style of Urusei Yatsura, Oshii is really harkening back to it. And it does have some cute yuri moments even though it's pure comedy first, romantic comedy second. Great OPs and EDs too. 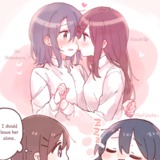 Too real, probably even a decade into their relationship.

What a melancholy chapter, especially towards the end. From Shimamura's realization that she might never see Hino again, to her thoughts about how she will eventually face her own death. Though I guess it's appropriate with the overall context of these chapters being Yashiro reminiscing about events from centuries prior. I wonder if the promise she made to Shimamura and that she might have already fulfilled will be related to those final days.

I kinda groaned when I saw we reached this inevitable point in any school-focused manga, but then Nanoha decided to blaze through the expected period of indecisiveness and drama and go straight to the resolution. Nice! 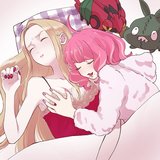 ^
Makes sense when you think about it, doesn't it? Poison x garbage. 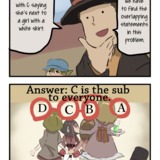 As a resident mega Layton fan I find this concept very amusing.

This has been a meme with the Pripara fans on /a/ for a long time, it's surreal to see it translated.

Just found out it was already scanlated (but not posted outside the threads) by the people involved with the s3, idoltime, and movie subs, ahaha... oops.

Yeah, but I'd only saw a page here and there when it got randomly posted so this was my first time reading it all, and your version has nicer typesetting.

This has been a meme with the Pripara fans on /a/ for a long time, it's surreal to see it translated.

seriously tho i loved this series so much. it really was an easy introduction. sign me up. im sold. bring on the poly yuri.

inb4 sequel titled "An In-depth Manual to Advanced Love Triangles (To Get into College!)"

Somewhat rushed for sure but it did what it set out to do. Though after the amazingly hot kisses in some of the previous chapters, the pretty anemic ones in the last two felt very underwhelming, especially now that all three were together. If volume 2 gets extra pages, they should be all about fixing that, lol.

@othiym23 You beat me by a few minutes and you expressed a lot of the same things I feel. For all intents and purposes I think it's safe to say this chapter was the confession. It was never about them saying "I love you".

This kind of relationship is definitely something the author has been trying to express throughout the whole series and why she said she'd rather not give it a label and let the work speak for itself. There's the infamous 'girlship' but that's just a marketing term rather than something that comes up in the context of the story. I wonder if she's come to her own answer considering both this chapter and the volume 9 preview at the end of volume 8 have been setting up Koyuki figuring out what Konatsu is to her and how to call that.

Honestly I'd almost see it as a bit of a cop-out at this point if they simply agreed to become girlfriends and start dating as the note to end the series on. They are definitely soulmates and both have expressed their desire and need to always be with each other, but the series went so deeply into their rawest feelings and insecurities that they managed to reach this conclusion without going through the usual motions of discovering a physical attraction to each other, which to me is a necessary part of a romantic love story. We've had things like Koyuki hugging Konatsu, Konatsu later hugging her back and stroking her hair while she was asleep, but they were always actions that punctuated specific emotional developments rather than being the point of the developments themselves, such as one hugging the other because she felt the desire for physical contact. It's telling that their most climactic instance of physical contact thus far has been them simply touching their palms while agreeing to use a first-name basis from then on, to signify that the distance between them had been finally closed. It's the most basic and stripped-down form of connection two people can have, through the full extension and contact of the body part a person uses to interact with the outside world, without any of the cultural and emotional baggage a hug, a kiss or even holding hands comes with.

In this context, I feel like making a kiss the big climax of the last two chapters would be out of place to me. If I've understood anything about the author in these past three years, is that her personal view of this relationship is one where romantic expression is off to the side and almost irrelevant. Of course people will come to the conclusion that they love each other that way, but their love is one that runs way deeper.

^
Konatsu does describe the aquarium club room as cave-like in the first chapter.

Fine, my main hope for the ending is that they go on an aquarium date in Tokyo.

I have my own set of hopes for the ending, but the one thing I really want is for the last or last two chapters to have both names in the title.

To me, the clear implication is that she’s supposed to be the prototypical “dyke”, and she’s the male author’s idea of what that would be. Basically a man trapped in a woman’s body.

The author is a woman. You're trying to apply to her a thought process she obviously doesn't follow. I myself am not a huge fan of Kase's overbearing jealousy, but it's clearly just meant to be a part of the dynamic that the author finds cute/appealing. And Yamada herself has explicitly noted that Kase is not simply "cool" in the way a guy would be and that she has feminine qualities too.

As for the rest, I don't know how you would think this story is meant to appeal more to male readers. Have you seen how any male character has been treated up to this point? This is the first time one (that's not an old man like one of the teachers) has ever been drawn with an actual face rather than a henohenomoheji and treated like a proper character rather than a prop for Kase to "rescue" Yamada from. If anything, it's been a series that's shown nothing but dismissal if not slight contempt towards the male gender. Specifying you're just talking about this arc is a cop out since the story so far clearly shows that the context is different.

I audibly squealed when I saw Konatsu hide behind the menu!

I seem to be physically incapable to look at the page where Koyuki says that being a salamander wouldn't be so bad without making a big smile no matter how many times I see it.

Then again, Koyuki outright said Konatsu is not just a friend to her in this chapter so it's understandable.

I generally try to write my thoughts and impressions in a collected manner, but surely I can gush a little bit at this point? I love how the story has come full circle, it feels like the author painstakingly planned every little detail from the beginning. Each aquarium club show throughout the series was a landmark to highlight the development of the main characters, first when Konatsu was just starting out and going through the ropes, then stepping up to do it on her own in Koyuki's absence, then together with Koyuki who got embarassed of showing how much she enjoyed herself, and finally now with Konatsu as club president and Koyuki joining in and displaying her fun to everyone.

Even bit characters like Koyuki's classmates went from being intimidated by her and putting her on a pedestal, to dragging her along with good intentions but without understanding her needs and worries, to finally seeing and accepting her for who she is. But the one who grew the most out of the side characters is probably Fuyuki, who was childishly annoyed at being considered a mama's boy by his friends last time they went together at the school festival, and who now willingly remained with her as they bond over something they both like.

I'd have too much to say about Koyuki and Konatsu themselves, but it's not really necessary as all the callbacks were pretty clear in the story itself. I just want to express how satisfying it is to see how it all came together with Koyuki's line. Konatsu hiding her face behind the menu while expectantly waiting to see if she'd figure it out was really cute. And for all her previous worries about not wanting to be selfish and not being able to tell Koyuki everything she wanted, it's just so fitting that in the end she conveyed all her feelings without having to say a single word, and for Koyuki to finally be observant about both her own feelings and Konatsu's. They've come so far.

Love how he didn't have done anything but some are already him for just being a male near a lesbian couple. It's even more probable he will end up with Yamada's college friend.

Not only that, Yamada getting a certification would further her career and have a positive impact on her life. 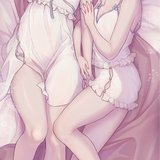 Oh, finally some focus on Yamada's activities. I wonder where this is going and I hope there's no silly cop-out such as Seki secretly being a girl (especially since that wouldn't really change Kase's stance on him, would it?). Since Hana has been looking for a boyfriend for a while, maybe something between them could happen instead. Surely Kase could stop being so jealous for one second then, right? Right?

^
If you mean つづく, it means "continued".