very subscribed. thanks for the chapter <3

This series never fails to get my heart to race.

Didn't expect them to be so forward/open about sex. Good job girls.

I kind of expect her to confront Hino about her obvious crush soon. Or talk to Kogu about why Hino wants to see her in a bathing suit.

Chapter 85 is up, and its mega cute. Just so ya know, this is how I get scripts from Stan before I proofread them:

85 - 3
1. (sign) Public pool
2. Temporary Closure OwO
As of kyouha, the powol will be closed temporarily for equipment inspection.
We apowlowgize for the inconwenienve, and will try to open again as soon as possible.
Thank you for understanding UwU.
3. Sigh...
4. Never thought the pool would be closed.
5. It happens, I guess.

I don't see how this is an idiot couple. Neither of the two main characters really act that way to me. If this is tagged with that, then a huge number of other works should also have this tag.

It's basically in between right now, but we'll have to see how it shakes out.

I missed this release a few days ago because I can never remember untranslated titles that don't have names in them, especially after a long break.

That said, I absolutely adore this series. It's way too cute. Can't wait for the rest of the volume!! Thank you knight heron crew <3 <3 <3

I thought I would be okay with this type of ending, but it turns out I'm not. Here is my summary of the never to be released volume three that was leaked to me and no one else:

Ise and Shima decide that because rent is so expensive in Osaka they will be fine sharing a bedroom to save money. They have lots of adorable mini-adventures exploring Osaka together, but the biggest adventure of them all is the one in the bedroom.

Each night they go a little farther. Holding hands, getting really close, playing with each other's hair, spooning, playing footsie, hands explore each other's hips and legs as they spoon, nuzzling their heads into the back of one another's necks. There's lots of doki-doki as we get glimpses of what they are thinking.

Eventually Shima is tired of waiting for Ise to make a move, and when they are spooning she starts kissing her neck. She hugs her tightly and kisses her ear and Ise lets out a little moan.

Ise turns around, "You know if you do that, you're gonna give me the wrong idea."

Shima with a pouty mouth, "Well I wish you would get the idea, already." She puts her arms around Ise's neck and gives her a big kiss on the lips. Ise's face goes bright red, and Shima takes the opportunity to move on top of her. The scene fades out as they start making out. (Turns out Shima is the top.)

Two years later, they are being promoted and transferred again. This time they are excited. As they discuss the transfer with their boss they are holding hands under the table and both have rings on.

I was wrong. Hino is off this week, next chapter should be Sept 12...

Just picked this series up with chapter 12 and it's super charming. Somehow it slipped by me, and I'm really glad I gave it a shot. Fingers crossed for yuri, but I think I'll enjoy it no matter what. It's rare to see disabled characters written with such respect. I hope that continues.

Very grateful to the Gouma-Den crew for the hard work. Thank you~~~

I love it to pieces

but why would they not opt for yuri?

these two are soulmates. it'd be such a strange decision.

and yes i will enjoy it even if it just touches on Story S romantic 2 girl friendship etc. but honestly they should move to shibuya or sapporo and get married!

She’s 17 so idk about soulmates. There’s still a volume or two left anyways

i mean, she clearly loves drawing boobs, so...

Thank you, Fuuka—you have done your job with style and grace.

As a parting gift, you get a shot at Subaru, maybe in an omake.

lol yeah, been expecting fuuka x subaru for a while, tho it's kinda creepy to get rejected by the girl you like then start dating her younger sister instead...

I adore this series. I cannot wait for the conclusion. Thanks for the release <3

I love this series so much. Thanks for all the hard work!! 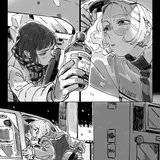 i love this way too much. such a nice style. super cute pose with her holding the hat behind her back.

thanks, i updated the author page to include this.

so much fucking amazing manga with disabled characters lately. its giving me life. how did i only just find this one. thank you 0mniessence for giving us this wonderful gift. <3

TW//Sexual abuse, pretty personal shit, click at own risk, had to get it out after reading those last chapters. snip

sometimes it's just incredibly helpful to see yourself represented in media, especially if it's a rarity. this is why i am so drawn to manga with disabled characters being treated (by the mangaka at least) in a respectful way.

that is a big part of the plot of asper girl. the main character draws manga where the main characters experience intense bullying and trauma. he hardly has any readers, but he continues with the thought that if his manga helps even just a few people, it was worth it.

came here looking for more after reading can i get you to go.

this series is so adorable - i love it so much. i would have liked to see some more intimate scenes between the two main characters. some nice smooches, and nuzzles would have been good.

loved it either way. i feel like i've been blessed with a few extra years of life after reading something so heartwarming. <3

i just read thru hello, melancholic because of how cute this one shot was. it was super duper adorable. if you liked this, and haven't read hello, melancholic, give it a shot. so heartwarming. i feel like i'm going to live a long healthy life now...

wonderful job with the dialogue as always. managing to convey distinct personality thru accents and speech patterns is really difficult and you guys always nail it. 11/10

oh, also the manga is cute as shit.

well, i just finished what has been scanlated of asper girl.

i almost stopped really early on because some of it was too much for me, but overall i'm glad i stuck with it.

i have plenty of criticism about both specific details and the general theme, but there was a lot that felt genuine and that i related to in one way or another. the depiction of ptsd is particularly powerful (and painful).

i definitely prefer ah... and mm... because i feel like it's more subtle — the autism spectrum is broad, but at times it felt like saitou (from asper girl) was more of a caricature than a true representation of someone on the spectum.

that said i will continue to follow along with the scanlation releases and would recommend it to people who are brave of heart, and not triggered by self harm, suicide, abuse, animal abuse, rape, among other things...

it's definitely not a fun read, but there is probably something there for you if you are interested in this type of content and can handle how intense it is.

god i fuckin love this series. thanks for the hard work gouma-den <3

edit: also I don't expect the next arc to be cliche. this series has been well written — though maybe a bit overly introspective — up to this point, and i expect that to continue.

It's one of those titles that is woefully underrated, but at the same time, I can see why it wouldn't be the sort of thing that will appeal to everyone. It's certainly not the sort of title I would recommend to most gung ho shonen-loving manga readers, but in a thread on Dynasty for "Ah... and Mm... Are All She Says" I think it has a far better chance of finding its audience. I hope it doesn't turn out to be a waste of your time, but worst-case scenario it'll cost you like 5 minutes of your life. One thing I can say for certain is the author is either on the spectrum or has loved someone who is.

Thanks for the link!

It definitely won't be a waste of my time. Any manga with respectfully written disabled characters is worth checking out. When you are disabled, you don't often get to read manga with main characters who deal with the same things you do.

This series continues to be unlike any other manga I've read. Really enjoying every chapter.

You might want to check out Asper Girl sometime. It's got a lot in common with this manga, but it's also got a bit of a darker more realistic edge to it, yet it is very much so still quite warm and fuzzy in a lot of ways just like this is. It's a slice-of-life manga with some light romance that follows the life of an ero mangaka who suffers from depression and a young woman on the autistic spectrum who moves in much like the MC from this manga.

Fair warning, although the overall feel of Aper Girl is positive and life-affirming it does not flinch from showing mental illness in a strikingly realistic light so there could be some triggering stuff for those who struggle with similar conditions. It's not some misery-driven aaaangst parade, but it is also a story where the camera never flinches. It really is quite special.

I'll give it a look, but it might be too much for me. Warm and fuzzy is good. Is it on MangaDex? I couldn't find it.