Am i the only one who doesn’t mind the slow progression lmao? i don’t want school zone to end

Ginashi
Does It Count if Your First Time Is With an Android? discussion 18 Aug 11:14
Quote

Ginashi
That Time I Was Blackmailed By the Class's Green Tea Bitch discussion 31 Jul 15:39
Quote

Best thing China has produced since gunpowder... and genocides.

nah cause this is just pissing me off at this point...

So there’s manga with cheating, incest, rape, physical assault/bullying but people draw the line at rich people? y’all need to go outside and touch grass istg

this was kinda sad omg

Is this the last chapter :(

Akira’s character improved a lot from before.. but damn she annoys the absolute HELL out of me jesus christ 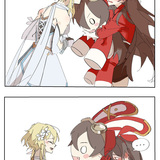 Amber is so cute but she’s so useless in game

Ginashi
Even If It Was Just Once, I Regret It discussion 08 Nov 01:03
Quote

No because that was kinda hot! these two are just too cute ahhh

Man I can’t stress enough how much I adore this manga. And sensei presumably had a little thing w her teacher as well in her high school days?? maybe a little side story of that might be interesting hehe

So the two are living together... but with Kaoru having no romantic feelings towards the younger girl? and didn’t Uta say she’s gonna hold onto the “dumb unrequited love” so she still has a crush on Kaoru while being in the same house as her?!! and the fact that the brother/ex-husband lives in the SAME BUILDING makes it even more messed
up and unsettling wtf.

after like 30+ chapters over a span of 4 years couldn’t this be wrapped up a little more realistically? like Uta moving on from Kaoru and getting herself a gf and Kaoru moving on from the ex-husband and working on herself cause she was just fucked up like,,, the entire series with some serious dependency issues. or at least like... end it by making kaoru realize that she’s gay and then making them get together. that’s a terrible ending too (and unbelievable), but it would still make more sense than whatever the fuck THIS is... like wow i’m speechless.

it’s even worse than the lesbian gym manga ending with the timeskip. in all honestly, this is why homophobia rates in the country is going up /j

omg... lesbians are THRIVING in this manga except for the main ship oop-

i still hate akira for some reasons. i don’t fw her vibe smh

Ginashi
A Girl Like A Pilgrim discussion 08 Sep 08:59
Quote

this story is so weird... if there’s no supernatural elements that’s supposed to be in the story then aiko definitely has some sort of mental problem??

i hope there’s a sequel? idk but i rlly like this

okay why is this story lowkey funny... the way that she retired bc she couldn’t top another girl anymore got me cackling

so she got enchanted by her cousins good coochie and broke up with her current gf? um... this was kinda???

I had sex in school like every other day of my last semester in highschool. Storage rooms, closets, bathrooms, the greenhouse, during class in the back row. There's options. The only times I got caught was after I basically didn't care at all and was a being of pure hubris. There were no consequences though because people would rather ignore a problem if they can.

i can understand behind closed doors like empty classrooms, storage rooms etc. but in the BACK ROW OF CLASS? LMFAOOOO