Every fucking time I read this oneshot without fail the tears start flowing
sigh...I love it

So they got doubled married

Ranzo
With that Forbidden Girl in a Forbidden Place discussion 05 Jan 16:43
Quote

Did that nurse up and die on her way back or what?

You know something I've always found strange about these school mangas is the supreme power the student council seems to wield. Like back when I went to high school I know we had one but I don't think I ever knew who they were.

IT HAPPENED! IT FINALLY FUCKING HAPPEND!

What I really love about this work is how much movement is in it, there's just so much motion even though two characters just might be talking. There are a lot of manga that have just a lot of static dialog scenes so something like this is refreshing.

Yeah, with how much this manga loves the bait and switch I'm sure she just took a big bite out of a Dagwood sandwich instead.

Man, death can be such a bitch huh?

Cute. Personally, I'm still waiting for an "age gap" tagged story that starts off with an office lady in her late 20's, then subverts with the age gap being her falling for a woman in her late 30's.

Hell, I'm just glad she was in college

Age-gap is a dangerous tag filled with arrest warrants

Ranzo
A Monster Wants to Eat Me discussion 16 Dec 00:29
Quote

This series really reminds me of this one
They've got quite a few similarities
https://myanimelist.net/manga/129187/Hachigatsu_Kokonoka__Boku_wa_Kimi_ni_Kuwareru

Ranzo
A Monster Wants to Eat Me discussion 13 Dec 19:17
Quote

Man, it is always good to see the power of friendship so clearly displayed
https://www.youtube.com/watch?v=FzbFCU6LoyI

Ranzo
My Ignorance of a World Yet Unknown discussion 08 Dec 22:43
Quote

One day I'll see an end to this

Oh, cool homegirl meets someone who knows her secret but won't try and sabotage her or purposefully get in her way
How new!

Discrimination is certainly not cliche. I can hardly remember any yuri mangas which use the term lgbt. Some people are really offended if it's not a fairy tale world

The bullying part was rather ham but described something basically realistic, but the "you need to be a live in caretaker for an attractive older woman" is more egregiously a trope.

That said, I enjoyed Can't Refuse The Lonely Girl despite the blackmail trope in that being a hella contrived excuse.

Yeah, I'm fine for trope setups if the series can rise above the trope like Can't Refuse or Handsome Girl and Sheltered Girl

Hopefully this can rise above

A big reason I and many others probably don't like Liberty is how horribly confused it is
When it started out I was hooked on the first couple chapters because of how alluring and mysterious Liz appeared to be and how their relationship escalated in a pretty great way
Then the drama with those fucking earrings happened
Then Liz stopped becoming alluring or mysterious and she morphed into an abusive bitch
Then Maki morphed into either a potted plant or a sponge
Then Liz's ex arrived and Liz jumped on her like she was catching a last minute train
And like, I'm cool with reading a story about shitty characters doing shitty things (if it is done right)
But what I'm not cool with is all the confused messaging about acceptance that the author is trying to cram into the story.
Like, I'm good with the whole acceptance and tolerance thing but this really isn't the story to do it in and these clearly aren't the type of role models to be funneling these messages through.
Also, there is barely any fucking time spent to developing this relationship at all.
We get one slave contract and some riding yo' girl to the bathroom nonsense before the ex shows up and starts slamming Liz like an express train through a concrete barrier.
The author seems to want us to care about his relationship when almost zero work has been done to actually show it. 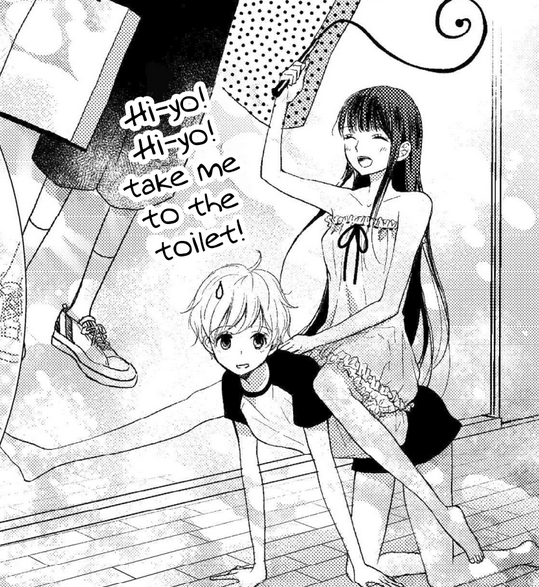 Yeah, I absolutely love how this is the image she thinks of when she thinks of her and Maki
I'm kinda surprised that they didn't include those times Liz casually hit her

When you want to wring both characters necks the manga

So wait, this is still totally the web comic version right?
And not like the official serialization version