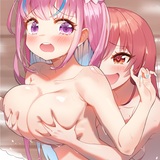 I did the same with the Statue in Monstadt hahaha (no luck the first try) and my alt account is sitting inside of the Church, praying to the gatcha Gods I guess lo/

Crushing with brute force is okay when you're in the latest levels but I'm on the early levels so I still need strategy xP that's why I wanted to gather them all in one place, I think it's going to reset in a week so I wanted to get as far as I could (like floor 4 or 5) before that, but... I'm not strong enough :(

YUSH!!! Mona arc is coming!!! I'm taking things slow but that's a reason to hurry now XD ahahaha (well, it's permanent so maybe not so much), like I Said, she talks a lot when she's idle! she mentioned a master, so I want to meet her too (and then yuri ship her if possible)

Edit: By the way, you people have some kind of ritual to roll? or like, wait for specific times and places? I'm trying to save enough to buy 10 wishes at a time and then pick a nice place.

This is just speculation but I'm sure they'll eventually add Light and Dark attributes because... of course!! well, we have a lot of Genshin to enjoy in the future, that's good, I'm playing slowly, I don't have the need to rush to the endgame when there's so much farming ahead and people waiting for next cities too.

When I was playing Blade and Soul, I used to waste all my nights trying to get pieces of a set, fight against my own guild mates to get my chance, and when I was almost done with armor and ready to get jewelry, a new update would come that made everything that came before seem like plastic toys... So I learned my lesson there hahaha

Oooh that would be so good.... I saw in some comment at youtube that the next City would give the MC electro abilities too... That's exciting! idk where are all these people getting their "leaks" but I hope at least the option to get Fischl is true

I have Sucrose but I don't use her yet, but now that I tried abyss... looks like you need her or Venti, just to gather all those mobs in one place, aaah if I could have just one more slot to carry a party of 5 that would be great!!! is so silly to switch to one character just to grab a rock or activate one puzzle and then kick them out sometimes.

I play in Japanese because OF COURSE! lo/ and spanish subtitles.... I haven't been able to play much, my country succs prettty hard so we're dealing with power outages left and right and internet shortages.

Also I have Mona, thanks 塞雷娅 .... I had to do it!!! and you know what? I don't regret a thing, she's sooooooo fun!!!!! you could gimme an account with 2 or even 3 5stars and I would still think "but what if I had Mona..." and now that I got her I can't get enough, she talks a lot, she runs like a river and her attacks are flashy and fun. So yeah, I'm happy!!! worst case scenario, during my rerolls, I got an account with Venti, another with Qiqi and also Keqing so I would just switch.

I'm using Amber too, she and Mona have the same effect of luring enemies with their E attack so they work pretty well together to keep the enemies away from me + Xianling and Barbara and that's my team most of the times.

There's... however, one problem... My Mona account doesn't have Fischl, so I guess I'll save gems until we met again in the next rate up, might take a while but I'll deal with it.

Also! for everyone starting the game or taking things easy, go to the church in the first town and talk with Victoria (the first nun to the left) and ask her about good places to visit around town.

Are you going to isekai the armadillo or just move it a couple of miles?

@Nene I love that manga! and the comedy and faces remind me of Comprehensive Tovarisch XD is all so silly and cute, the protagonist loves yuri so much hahaha and yeah they might become friends but her head is so full of lilies that the first thing she thought was "did I raised the gyaru flag?!" LOL (and she wasn't against it...)

@Kirin you'll love the girls of K-on, they made me laugh and cry too... and I gotta give it to Kyoani, they took the manga that was good and made it into something so beautiful!!! It was amazing.

But I'll never understand why they didn't cover the end of the manga too... Oh well, it just means that once you're done with the anime, s2, ovas and the movie, you can also jump to the manga and read even more (but not THAT much).

Thanks for the suggestion, I shall try... I heard my friend tried like 50 rerollings to get what he wanted but I don't have the time for that... I got Qiqi, Venti(twice), Keqing and my friend who's trying to get another character got Qiqi and Jean.

If I couldn't get Mona at the end of the day I would've keep playing with Keqing, is an amazing account I got in ar7 with her, Xiangling, Fishcl, Barbara, Razor and Sucrose.

Fischl is easily a 5 stars characters in disguise, already stronger than half of the real 5 stars imo hahaha and useful. Combine her with Xiangling and well GG

塞雷娅 I understand that there's a system in place, but if the rumors or leaks are true I just don't want to wait that long for her banner... Feels like, by that time I would be in the endgame content, I rather start early with her and have a blast without worrying who comes next, just enjoying the story and quests, so in short, If I have Mona and Fischl then the game becomes 10 times more enjoyable for me so I rather reroll like a Korean bot or pay.

Also, there's a site that sells accounts with characters in AR7 (I didn't look for it, it was a youtube ad) and you know why I didn't buy it? because they pick the Male twin by default in all their accounts lo/... Outrageous !

I would but this is a game based on luck too so the possibility that even with her Banner and according to some sources that's for January I might still miss her with or without paying is so stupid that I rather do whatever I can now.

Sure I'll stick with what I got... Once I get Mona 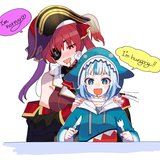 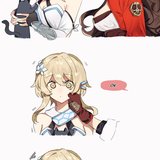 She might not be meta in game, but she's meta in ships 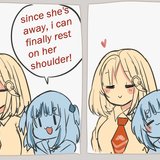 But I only ship her with Gur-.. wait Ina is good too.. ah doushioooooooo

I liked Marnie, but the bait and switch was really cheap... yeah, but I guess if I wasn't such a hardcore yuri fan it wouldn't be so bad.
Is not a movie I would watch again, that's for sure... Speaking of movies that were very impressive but I would never watch again not even in 10 or 50 years, there's Made in Abysss 3 Dawn of the deep soul is just suffering, I don't think that whatever is awaiting down there is worth it, I don't care anymore and I don't think my curiosity can beat any more tragic moments... and to see them smiling again and hopefull at the end is just so bizzarre to me that I can't help but feel that they're beyond insane at this point.

Fuck the educational system, the only time our school had something related to sex and not the molecular process of fertilization that comes after with hetero sexual couples was when they showed a lame animated clip of some ugly bastard raping a child and giving him AIDS and how he died, the message was horrendous and the point was to give us a trauma so we wouldn't try or at least not without protection and even then, they didn't explain what real sex is.

We have white that represents the Lily flower

Thanks for sharing your embarrassing past episodes, Pekoe and Rye... still, I feel like I won but the victory hurts hahahaha aaah! but you know, I got the full album now hahahaha it's nice and I listen to it sometimes... I don't cry anymore.

Moona x Amelia?! OMG.... I NEED THAT! and MArine and Gura

Maybe Watame and Ina or Ina and Marine

Don't mind me, I'm just checking the analytics, the increase of School Zone profile pictures... I see Yatsude and Piyo on the lead, nauruhodo naruhodo.

Oh yeah another Tsubaki's smile!! I'm protected from any debuffs or dark attribute attacks for at least 5 hours