Every chapter of this manga draws me in even more. I love this.

This is my take in the later chapters now, but Akira can be a massive prick...

That's because she's the first of the three of them being forced to face up to what's stopping her from having the relationship she wants. The whole premise is that here's three girls careening towards a ménage à trois who all have an interpersonal shortcoming standing between them and actualizing that.

Akira looks bad right now because she's the only one who's actually crashed headfirst into the character development she needs. The other two still haven't hit the wall yet even if we can see they're also clearly headed for it.

I kinda hope Canno doesn't just end this series with the polycule being formed, but actually explores the whole process of being in a three-person relationship, and all the dynamics that result from it. Mayuki seems like the type who'd fixate on one person in the heat of the moment, Rin would probably struggle to voice any protests she has because she'd be too happy to get into her ideal relationship to ever risk antagonizing any of the people involved, and Akira's superiority complex and tendency for envy don't seem like they'd vanish over the weekend. A big theme of this series that's been set up is that It's hard to keep three people together, and watching these girls resolve those issues whilst in a relationship would definitely be interesting, especially with how little poly rep we currently have. I don't really subscribe to the whole getting into a relationship is the culmination of character development belief, especially since the relationship in this context is new territory. Canno's handled the character development with incredible efficiency and subtlety till this point, so I'd definitely want to see this series explore its subject matter in further detail, as opposed to the dreaded time-skip last chapter post-confession(s).

Two plus two equals four. Four minus one is three. Quick Mafs.

This is a bit painful lol

This is a bit painful lol

But it seems it'll get better.

Yeah girl, that's call cheap way to resolve a triangle. Feel like she will agree mostly because she don't want anyone sad rather than she love both. Also not to mention that the path is clearly mostly clear for the Poly, meaning that if Canno had no plan to expand after they get together, it will not last longer than what ? 15 chapters or 20 if i'm generous.

Akira is the most complex character here, but man she still annoys me

Akira seems to mostly fly blind at the moment because she feels inferior to Mayuki and Rin emotionally, and with Mayuki promising (in a different context), that she will figure it out, she leaves it to her in the hope, that her own problems will also get solved along the way by other people. Props to her for not giving in to the temptation of messing with others.

At the same time, we know the most about her, because Akira seems to be in the most difficult position because she knows the most - she's the only one who sees the whole scene. Everyone else just knows their own feelings (don't remember if Rin knows that Mayuki loves Akira, but she still doesn't know that Akira likes her). With that, she has to face the fact that her own love interest is focusing on someone else, while she is the target of said person. She also seems to be one, that would potentially harbor the most jealousy and possessiveness, but we don't know enough about Mayuki to say that yet.

Mayuki, only knowing her own situation, doesn't really have to face anything yet, because she has a singular focus - get to a specific high school, get with a specific girl. But that will also have to collide with what other people want sooner or later. For now, she seems to be fine, but what if she were to find out the whole situation?

The author is in command of a reservoir of Byzanthine nefariousness hitherto unapprehendable. Bring it on.

The trio has finally united! Is this what all those Marvel fans felt back in 2012 when the Avengers movie came out? At any rate, they've all got promises to keep and miles to go before they sleep (with each other).

Current status of our three protagonists:

Akira: Continues to cement her status as the manga's most complex, brilliantly-written character. The way she grapples with her entitlement versus her recent sense of inferiority, the way her sentiments and feelings both tie into her manipulative side and undermine her attempts at plotting, the way she's constantly trying to figure out the best way to make each individual happy, but still can't come to terms with the idea of the collective- it's all so excellent. Someone give Canno a goddamn medal.

Rin: Suffering from success right now. She's multi-track drifting between wise elder lesbian and dense harem lead with incredible efficiency, but still perfectly manages to perform her role as the triangle's grand unifier. Now that she's gotten a taste of what it's like to be in the audience, how'll she deal with it? Part of her wants to hold on, part of her wants to let go, all of her wants to kiss more girls- poor Rin. She better get some big dividends after this.

Mayuki: Suffering from success. Our queen literally can't stop topping girls. She laughs in the face of your fragile heterosexuality, and steadily becomes the center of your world. Can't wait for her to start dual-wielding lesbians. Her biggest worry right now is that she can't turn around without flattening five skyscrapers with her monster clit. Akira better give up on her basketball career, cause she ain't gonna be able to walk after Mayuki's done with her, and Rin's gonna find out that this airhead is worth an entire polycule's worth of gayness all by herself.

All in all, this continues to be one of my favourite ongoing series, and if Canno maintains this level of quality, it'll easily cruise into the history books. Hopefully, we'll get more lesbian polycules if this series is successful enough.

Hopefully, we'll get more lesbian polycules if this series is successful enough.

I mean, it's already something that it's a bit popular. Not everyone can do Poly and make it work.

Well i don't want to be so harsh because you don't seem to be that objective on the subject. I mean it's good if it work but i don't think I will bet on any of this claims.

(Yeah Yeah, i'm a killjoy. I already know that i don't need to be that mean but come on, it's a place of free speech and also i don't say that the manga is trash.)

Man Rin is still my fav

Well i don't want to be so harsh because you don't seem to be that objective on the subject. I mean it's good if it work but i don't think I will bet on any of this claims.

No, you're right. I just measured out the average amount of saliva spilled in the kissing scenes and it's considerably less than anything in a Mira doujin. After counting the number of times the girls talked about their feelings, I can confirm that it's less than 10% of what you'd find in Girl Friends. I tallied up the number of overall girls, and despite multiple checks, I found that they were far less than anything in WataMote. The manga is also about love triangles, but nobody actually ever talks about triangles, unlike Bloom Into You, which has flowers in the anime adaptation's OP that clearly indicate that there is blooming involved. I also asked the lesbian living two floors down if she knew about it, and she asked me why I was shaking my smartphone at her at 3 in the night, clearly proving that this series is Not Popular. I don't know how I could've been so naive instead of approaching a piece of media with Absolute Facts. Rest assured that this mistake will never be repeated.

I have now stowed my Feelings and Tastes in a briefcase and flung them into the nearest river. Having now attained peak objectivity, I'm off to the Louvre to yell at random tourists about why the Mona Lisa is only a 7.6/10, because she barely even has good tiddy. Thank you for enlightening me about the right way to read manga. 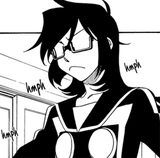 Kirin, I hope you are a girl, I like you.

Kirin, I hope you are a girl, I like you.

Which tag should we add to this thread, yuri or het?

Could (and prolly does) refer to its quality and not popularity

Could (and prolly does) refer to its quality and not popularity

I mean Quality stay non-objective in itself. If you like it you will say it's quality and vice versa

Thank you for enlightening me about the right way to read manga.

I was merely giving my own opinion like you did. Now if you can't take it, that's something i can't do much about it, i'm sorry. Like, i never said that you shouldn't like this manga because it's bad and all, i just state what is my honest opinion. Honestly you sound very condescending.

I'm gonna be extremely happy if a good chunk of the drama will be about Akira being pissed in that boyish, entitled way. It's certainly a much more interesting, realistic way to create conflict than the usual misunderstanding. I mean, it still is fundamentally, but it crosses into the total incomprehension that surrounds polyamory irl. Anger might be the least explored emotion in yuri as of yet, so this shall be a blast

Akira’s character improved a lot from before.. but damn she annoys the absolute HELL out of me jesus christ

I wonder if Mayuki has realized that she barely needs any "practice" with kissing with her current level. She’s basically just hooked on it at this point.