Forum › The Moon on a Rainy Night discussion

More possible evidence to the mom maybe knowing, chapter 1 page 17, after Saki says how beautiful the random stranger she saw was and beaming while retelling the scene, mom silently smiles with a "hmm".

Very much noted this myself in my comment for the first chapter over at MAL when I started reading this as well (didn't bother commenting here since there were already a number of chapters out by the time):

It's difficult to tell how aware she is of it herself, but her mother certainly seems to have grasped that Saki prefers girls, judging by her reaction to the piano teacher's marriage - she may just as well have said outright that Saki was only learning it because she was in love with the teacher. And the lack of reaction to her gushing over Kanon as well. :D

that would be really cool actually, and I'm being completely serious here pretty ingenious storytelling if it does happen

Unless this takes place over a very long span of their relationship, I feel like jumping to a marriage proposal would be kind of cart-before-the-horse-y?

Yeah that's true, I was mostly thinking of it as a symbol of her liking Kanon that way not exactly about asking for marriage already.

Hey but on the subject, with the mention of Kanon's hearing getting worse as she gets older maybe some passage of time could happen.

Love that my exact thought when Kanon showed the marriage signs was that lesbian marriage would be two pinkies together. LOVE that we're pretty much past subtext now because that pinky gesture at the end pretty much sealed the deal. So next comes the angst of Saki battling with the gayness inside her while trying to be Kanon's friend, yes?

Perhaps if they had a sleepover they could practice their sign language with fewer clothes on. That might help the subtext part.

Not to say that Saki is not gay (because I am fairly certain she is), but the author may preserve the subtext simply by implying that the marriage gesture is indicative of Saki's fear over losing a very close female bond. Keep in mind her piano teacher was obviously someone she cared for very much, but then she left after telling Saki she was getting married. Saki may fear that eventually Kanon will leave her for a relationship with a man somewhere down the line, and that fear is why she wishes they could be more closely bonded. In other words, the mangaka could simply write it off as Saki having abandonment issues, rather than her being attracted to Kanon romantically.

That being said, Saki is one thirsty girl. She gets worked up merely from being too close to Kanon. They should probably change the tag to at least "yuri crush" at this point, since it's not 100% clear if Kanon views Saki in the same way. Although, if the author does pursue a full-on yuri plot, I fear that it could end badly. With Kanon potentially rejecting Saki as a girlfriend, and by so doing, losing her most important friendship...not that Saki would abandon her, but the tension and awkwardness might just taint their friendship. And honestly, as much as I would love to see these two get together, I don't want to see the deterioration of such a lovely bond. So... we already have reached lesbian marriage, but we still don't have yuri?
This is one complicated piece of narrative. 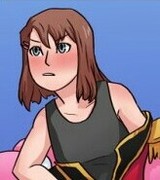 Certainly seems to have surpassed subtext. Ah I hope this one keeps updating 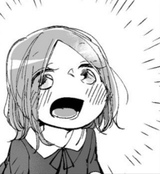 This have surpassed the line of subtext now, right?

They should probably change the tag to at least "yuri crush" at this point, since it's not 100% clear if Kanon views Saki in the same way.

Let me say that I’m not especially invested in the nuances of tagging definitions—for me the ones I care about are pretty blunt instruments for sorting, and that’s fine with me.

But the Dynasty definition for Yuri Crush really doesn’t apply to stories like this:

Soft feelings of amorous interest in another girl, as pure as a lily is white.
A feeling present mostly in young adolescents - often triggered by bear print panties, handsome women, or a case of mistaken identity.

This tag is meant particularly for non-yuri series, and should not be used in any story with a yuri tag, nor as another name for one-sided love.

(Note: As seen in this author’s Living With My Brother’s Wife, invited boob-groping is not in itself sufficient grounds for the Yuri tag when done for instructional/comparative purposes.)

*My prediction*I feel like Saki might start to get jealous of Kanon hanging out with those other girls if it clashes into their alone time. And Hopefully she does an accidental ‘blurt it out’ confession. One can only dream

(Note: As seen in this author’s Living With My Brother’s Wife, invited boob-groping is not in itself sufficient grounds for the Yuri tag when done for instructional/comparative purposes.)

As seen in KiraKira☆Study, neither are multiple declarations of love and intent to marry in the very first chapter. 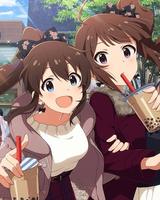 The mc already knows she’s gay so is this really subtext? It’s more one sided love than subtext since we already know from the mc’s point of view she’s interested in Kanon and not really in the friendly way GAAAAAAAYYYYYYYYYYY. I LOVE TO SEE IT.

I like how their relationship is developing, now I just need for Saki to tell Kanon about her crush on her old piano teacher.

Called out in the credits page damn, I will wait without caring to see how this turns out, absolutely not on the edge of my seat

Someone toss that teacher out the window please.

I was wondering how I possibly missed this manga

But thank you comments for telling me it used to have subtext, I tend to avoid reading those

I know writers who use subtext. And they're all cowards.

Chapter 1 was around the limit of where subtext goes, with the mention of marriage and the hurt feelings. Now we have a good idea of the conflicts and how it relates to Saki's interests in piano and Kanon.

Kanon is great. I can't wait to learn more about how she built and enforces the boundary between herself and others.

Haven't seen this one before. Now I'm in love with it and can't wait for more
the gayness of Saki is super cute but I hope something'll actually happen from it... especially with how infrequent the chapters seems to have been so far.

Aye nice to see fresh eyes taking a look at this series now that it’s got the Yuri tag here, it’s got a lot of potential.