FluffyCow
The Guy She Was Interested in Wasn't a Guy At All discussion 27 Jun 02:12
Quote

the thing is, ambiguity of relationships is one of the classic yuri tropes, and in fact it's only relatively recently that explicitly romantic, let alone sexual, relationships have become more common.

i'm not pointing this out so much to come down on one side or the other but to say that worrying about the exactly defined genre of a particular work might not be very fruitful. which for all i know is what the author is expressing in that interview excerpt.

It might help if we get an afterword from the author once the comic is finished, one in English and Japanese (since they've said before that they can speak both). So we can get a clear understanding of their intent and ideas, what kind of relationship they're intending for these characters. I think it would be interesting to hear their thought process.

FluffyCow
The Guy She Was Interested in Wasn't a Guy At All discussion 27 Jun 00:56
Quote

I was the one side in that argument stating that she said, in her interview, that she didn't consider the story she's currently writing as yuri (ie, romance between girls), but as "female close relationship" or something. Ie, Gal Pals. Or subtext.

Not yuri then. Friendly affection between girls. The warmth of having a gal pal who is really close to you, like a soulmate, and really understands you.

This reminds me of an episode of People Watching. The entire thing is about how popular culture heavily devalues friendships and tries to center everything on sexual relationships despite that being "Fucking lame."

Dating someone doesn't have to be a sexual relationship, romance doesn't have to be sexual. Yuri can be a whole lot of everything, including platonic. "Nettaigyo wa Yuki ni Kogareru" is listed as Subtext on here, but I've seen a good amount of people and other websites classify it as Yuri.

Also as for the video you linked, I feel it largely centralizes around the concept that men and women can be friends, without it being sexual or romantic. However there's also a very good comment on that video talking about relationships and the fears people have, the last part of said comment is "Their relationship is primed for a powerful and stable romantic relationship, but they refrain from moving their friendship to a romantic stage from fear of losing the existing trust and support. It is ironic, and in my opinion, bittersweet.", which I think is a very good point. People CAN just be friends, but they can also be more than friends without things being sexual or even romantic. It's a complicated topic, and feelings are hard to sort through, as humans we're messy unsure creatures.

With this manga we're on a website that focuses on sharing romantic F/F comics, and so a lot of people want to see them at least date, hold hands, fall in love and bond over music. I don't think everyone on here wants to see them fuck. I do think whatever relationship the author goes for should be interesting. There's nothing wrong with platonic friendships, nonsexual romances, and sexual relationships. Everyone has their preferences.

I'm a bit mixed. On one hand, hell yeah female friendships forming over a beautiful hobby that gets them kinda ostracised from others. On the other hand, it feels very much like galpal erasure of gay girls because they're just really close friends. Nothing's final until the author says so of course, but the path seems to be getting clearer.

I will definitely still follow this story, but just a bit disheartened now.

Yeah there's also I think the gay erasure aspect to consider here. Where so many same sex relationships just get dismissed as purely friends. As I said in my comments above, this series can still be Yuri, Women's Love, or however you want to define it where they're in something along the lines of maybe a platonic love relationship, that isn't romantic or sexual, but they're still more than friends.

FluffyCow
The Guy She Was Interested in Wasn't a Guy At All discussion 26 Jun 22:40
Quote

Nobody here really wants to be in the business of determining what is or isn't fitting the criteria of a Yuri (or related) tag. It's not an easy or straightforward determination in most of the cases in which it matters. So, I wouldn't expect any further changes to the current setup of Yuri, Yuri Crush, and Subtext until and unless other terms become more widely-used than they are today.

Makes sense, thanks for the reply! I think just using "Yuri" (and Yuri Crush + Subtext) is fine personally, the symbol of the Lily is still iconic in Japanese media.

FluffyCow
The Guy She Was Interested in Wasn't a Guy At All discussion 26 Jun 18:24
Quote

Well I didn't expect from this cute chapter to come into a serious and intense conversation like this.

All I can say is if we start tagging series on Dynasty as "wlw" and "Yuri" seperately there might be a lot of fighting on what exactly defines the two. Author intent. So many factors, along with personal opinions. I just don't see it going well at all personally, but maybe I'm wrong...

I definitely find their dynamic interesting. ^ If it's not a cheek kiss it's probably Eve whispering something. Regardless most every scene with Aoi and Eve is pretty dang flirty throughout the series haha 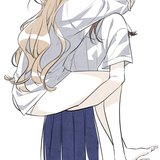 The carry kiss is perfect Adorable, Eresh deserves all the snuggles! 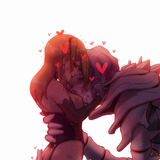 ^With the power of fanart anything is possible ;)

Also where is this version of the series? I need it heh ^Aye, it's unfortunately very rare. They're a cute pair and I'm happy to see this art! Kiara being assertive with Gura in collab and fanart is great, also that finger lick is 10/10. Ina you're next! Ame is going to be eating a lot more than an egg sandwich at this rate ;) Kokomi being assertive is a rare but very welcome sight!

Pretty sure it's the woman from the beginning of ch 11, going by the features and the reference to drawing manga.

...though damned if I could find any context for that scene or where Yamashita knew her from in the first place ¯\(ツ)/¯

Ah ha nice find, yeah that looks like her, interesting.

FluffyCow
My Female Friend Comes Home to Me Every Now and Again discussion 23 Jun 21:25
Quote

This is going to be one of those excitingly messy relationships.

Queue up the dramatic music and heartbreak.

I think I'm missing something here, and might have forgotten or not read something properly, is the married woman at the end her friend with the cat-ear like hair?

Nah that's not Takahashi. Without going back through all the chapters to see if she appeared before, i'd wager the married lady is simply one of her readers whom she met before at an event like this, that's why she greets her like that.

Ah okay, thanks. I was...very worried there for a second haha

Yeah I tried to skim through previous chapter but couldn't find her, so I was just like "hmm..."

FluffyCow
Soara and the House of Monsters discussion 23 Jun 20:32
Quote

FluffyCow
My Female Friend Comes Home to Me Every Now and Again discussion 23 Jun 19:53
Quote

(Guess the link says 22 since there's a page 0)
https://dynasty-scans.com/chapters/my_female_friend_comes_home_to_me_every_now_and_again_ch01#22

I think I'm missing something here, and might have forgotten or not read something properly, is the married woman at the end her friend with the cat-ear like hair?