Forum › Does It Count if Your First Time Is With an Android? discussion 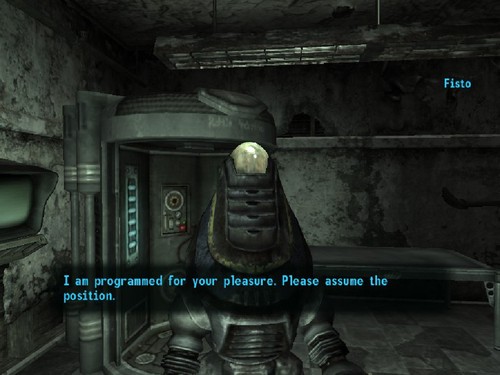 Ah, I see you are a man of culture as well.

In my game, Fisto never made it to the brothel. He was destroyed on the way by a gang of killer grannies in pink frilly dresses who apparently had nothing better to do than roam the desert and attack with rolling pins everything that moves.

That was some wild wasteland fo'sure.

In my game, Fisto never made it to the brothel. He was destroyed on the way by a gang of killer grannies in pink frilly dresses who apparently had nothing better to do than roam the desert and attack with rolling pins everything that moves.

That was some wild wasteland fo'sure.

Jet is hell of a drug o3o

This is how humans go extinct Ahhhhhh when will Japan improve their technology. I'm not getting any younger. will there have Iphone get into and we have 3some?:3 damn when does technology get to this level? When I become rich, I'll buy one

You're right man, you and me and A random yuri fan we're idiots but we're good friends

But we are grent friends. This is the most important part

How can you guys both like it and not have an opinion?

I read it in Spanish weeks ago, I was eagerly waiting for the English version!

Reaaally? Which site? Or just mangadex? I will check it out to see if I can get to read new chapters faster

The link to the site in another thread.

I wish I have saving of 5 million yen

Every single thing she says is gold. I'm also looking forward to her Master taking that underwear off, not because of the registering but because that's the most unsexy panties I've ever seen in manga. Now it's time to start saving for 5 million yen lol

This was pretty funny (and hot), but I always hate the unrealistic cliche of "beautiful woman somehow can't find a relationship". I refuse to believe a successful and beautiful woman like the MC couldn't find someone just because she's a slob.

i mean the mc is either oblivious, doesn’t want a relationship or is putting on a charismatic mask and actually has horrible social anxiety

She probably works really hard and doesn't have time for a relationship, or doesn't want one.

That and just because someone is super hot doesn't mean they'll find a relationship easily.
It must be hard for someone that looks like a super model to be sure that a person doesn't just want to get into your pants and actually wants a worthwhile relationship.

Anyway, this manga is gold. I laughed out loud when the android said: "I know you're resisting putting your finger in me because you're such a bottom, but..." Hilarious.

I wonder if the android will get a name or not and if she'll wear something besides a school girl uniform.

I'm reading a webtoon called LoveBot (read here https://www.webtoons.com/en/sf/lovebot/list?title_no=2324).
There's no lesbians. The two main characters are gay men. It's about this guy who works with robotics and, when he updates a robot, he accidentally leaves the robot sentient and asking for his help.

It's really interesting, because the sex bot was being abused by his "owner." The person who bought the sex robot really likes hurting people so they got a sex robot and they wanted one of the MCs to make its reaction to pain "more realistic." I'm enjoying tsuda's reaction so much, I can't stop rereading it lolol

That's less than my college debt.

That's less than my college debt. i wonder how advanced her A.I is to specifically want the MC as a master?

"Because you are such a bottom"

Call her the Skynet cuz she just went Judgement Day on her ass. Like daaaaaamn.