So if she wasn't going for a kiss, what was Nononon trying to do? Hide her face?

Feeling so weak she collapsed?

I'm pretty sure she went in to listen to her heartbeat.

Sounds like a plausible explanation.
Anyway, whatever it was, it was frigging cute. 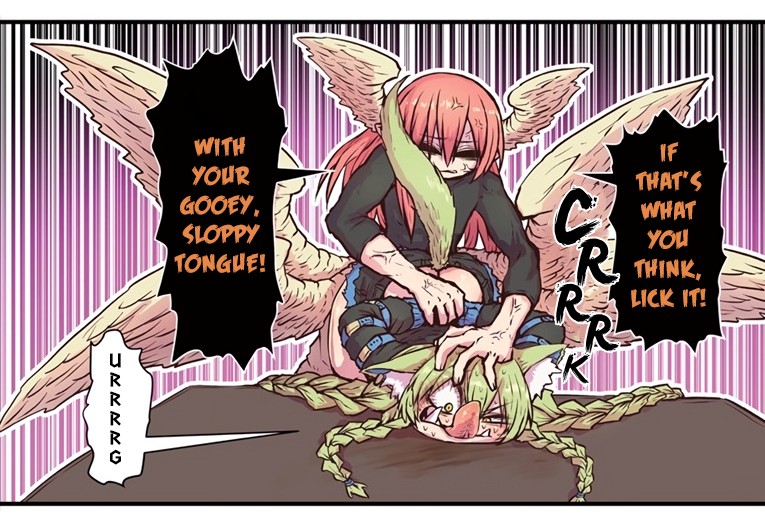 And they get married in the end.

Jeanne, your feminine intuition was SPOT ON, lol.

This chapter pretty much clobbers you on the head with a Theo x Ganko ship hammer. And is that a bite mark on Ina's squishy hair?

lol didn't notice till you mentioned it. XD

Somebody make her read some Itou Hachi, see if she smartens up.

They certainly know what hetero sex is, because they are taught that in sex education class. It's rather more impressive that they know about lesbian sex.

Anyways, why hasn't the yuri fandom have any special name? It still blows my mind. Or am I out of the loop?

I've seen the term Himejoshi/Himedanshi (姫女子/姫男子) being used to refer to fans of yuri/GL, though I haven't seen many use it to refer to themselves much? I like both yuri and yaoi so I guess I'd be more like a rotten princess or something. 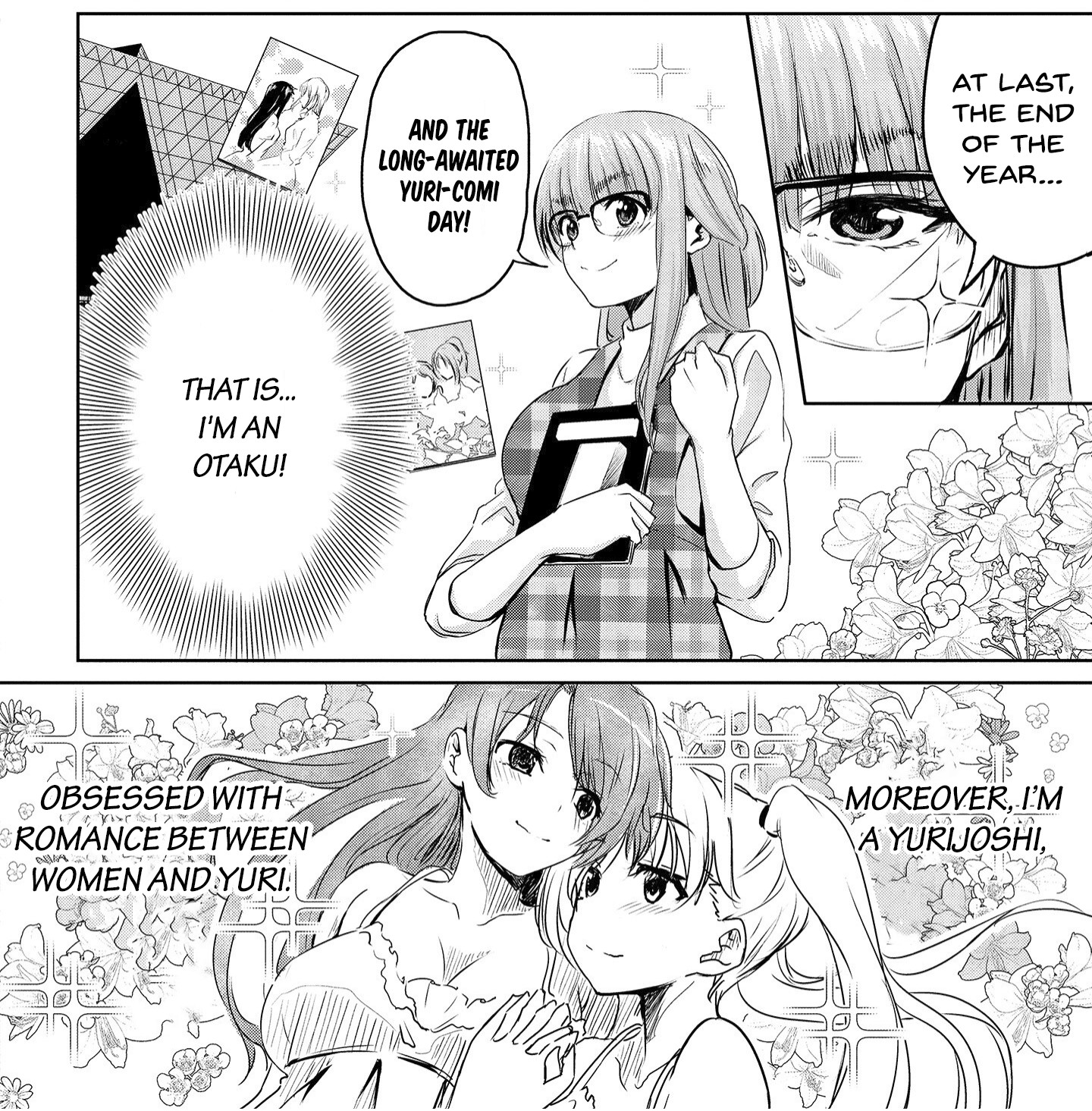 The "YOU WIN" on the screen is a nice touch. A lesbian succubus likes you? You are a winner at life!

It's nice but very surprising or perplexing that her coworker was like "Oh you're into girls too? alright lesss gooo" just like that, but I guess this manga is not trying to be too serious or more like, it should not be taken seriously.

Tfw you find that your coworker is Minori.

Well, leaving aside official reports, academic papers and the like, the easiest source to check is every Korean manhwa or tv series ever made with an office life setting. The culture of physical beatings is so widespread and universally accepted, they don't even bother sugarcoating it: they show it as it is. I have friends who have gone into serious culture shock the first time they saw an episode in a Korean drama where the boss gets angry at a female employee and starts scolding her and then starts hitting her and cuffing her on the head as he yells insults at her, while the other employees watch with a pitying look. Later, after work hours, the girls from the office will probably be drinking at a bar and complain airily about how the boss is too much, he didn't need to hit that hard.

Add in the sexual harassment (rampant) and the barefaced discrimination when it comes to salaries and job promotions, and you have to wonder where that 0.687 comes from.

Japan is better than all Middle Eastern countries on the map. As for numbers, Saudi Arabia, where women can't drive, is 0.603; Japan, where women can serve in the Diet, is 0.656. This might lead one to wonder about their methodology.

I'd say. South Korea is 0.687, way over Japan and on par with several European countries. Did they even do proper research? It's not just job discrimination that Korean women have to deal with: sexual harassment and physical beatings of female employees are standard corporate practices.

This manga's cool, even if it isn't yuri. I had to do a lot of reading about the sex industry in Japan for a paper I wrote in college, so it's always fun for me to see that kind of stuff in another form.

Yes, I feel you! There are too many people who like to talk about the sex industry without knowing the first thing about it. They just talk out of their asses, mistaking their phantasms for reality, and rant on just like a Chick tract.

It's refreshing and very welcome to see this kind of manga where the job is depicted just as what it is, a job, and all sides and aspects of the industry are explored with such thoroughness and realism.

(I would have never thought that one day I would find in a yuri manga the words: "Important note: Yoshida-san reacts well to ball licking." Lol x 1000)

It's been only four chapters and my Sayu x Tomoe ship has already reached a size that makes the Pioneering Spirit look like a dinghy. ♡

Wait, they’ve kissed and held hands—what more is there?

Yah, third base is as far as they can go, they just can't score a run... right?

Nene
A Scummy Gap Student With a Hard Life Calls Upon a Lady of the Night discussion 13 Sep 15:06
Quote

I also do wonder whats up with the girl that knows a secret of the teacher, she's being a bit too chummy with the MC I feel. I think it's good for the MC to get a friend but this feels like there is a reason for it.

She seems to like it when guys hit on her, so she probably isn't trying to seduce Scummy-chan.

Nene
The Marriage of the Onee-san I Admired discussion 12 Sep 14:50
Quote

I looked up the original because I was confused: this translation is all kind of wrongs.

The girl MC is a teacher (they call her "sensei" on the first bubble, but somehow, it's not mentioned here).

On page 2, it's starting a flashback : the boy is in primary school.

The one who got mad was the MC's mother, when THE MC introduced her lover to her own parents.

Implying it was probably a girl even then!

It's never mentioned she ever was with a guy, so the bisexual tags stems from a bad translation.

The boy was just in an unrequited love from the start... no het here.

This. This is exactly what I came to find. Thanks!
I knew right off the bat that there was something wrong with the translation. They kept referring to the mc's lover as "he" and "him" but it was plain that this person was a GIRL -- which explains why the parents got so angry when their daughter introduced her as one she wanted to marry. Had it been a man, any man, they wouldn't have blown all their fuses like that... but it was a woman!

So in summary the mc brought her female lover to her parents, told them she planned to marry that woman, they got absolutely furious, they started hurling vile homophobic insults, and she was so hurt and humiliated that she broke up with the mc. And the boy tells the mc to forget that bitch because she has proved herself unworthy: he claims that, if it was him, he would have returned see the mc's parents again and again and done dogeza in front of them for hours or days or as long as needed until they yielded and gave their blessing to the union! He really is a cutie and a sweetheart. ♡ Too bad him x mc was just impossible.

Today in Realistic Yuri: the real adult reasons to get in a relationship and stick to it.

Is this really a Heron translation? There's no oddly informative credit page. :\

What’s there to inform about? It’s simply a kiss

I also feel like something's missing in a Heron release without a credits page full of explanations, but I'm not sure what it could have been about. Maybe the Japanese concepts of tachi and neko and how they correlate to top/bottom and to dom/sub but should not be assumed to be interchangeable or even analogous with butch and femme?

"Resonate with me" That's how kids call it those days ?

Could be worse. They could be talking about epistemology (Daniel Ravinovitch dixit)

At which point X will reject her, claiming that formalist thought inevitably leads to subjective, atomistic idealism! Oh, no!

I mean, that's what Carlos Núñez did... right?

HEY! Where the hell is my ecchi?!? One day Rumano made some Kase-san x Yamada fanart. And the world was a better place.

B) He may not know he's in a yuri manga.

The editing work is absolutely incredible.
And the manga well deserves it. ♡

We need more stories like this one, to make people realize that Liz from Liberty and Kaoru from VE are not so bad after all.

I seem to notice a trend in some of Aweida's works... she loves to put three girls in a situation where two of them do something that appears outrageous and the third one reacts as the deadpan voice of common sense.

Works pretty well, I must say.

I love that girl, she gives the best tsukkomi.

Thanks to everyone in SAD for this new chapter!

Special thanks to drpepperfan for all the hard editing work!