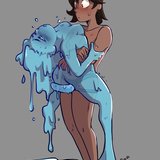 ^bold of you to assume artists and writers are able and willing to actually think of such details as the metabolic thermoregulation of their creations, as opposed to just going with the most obvious thoughtless stereotypes

That's a fascinating philosophy... too bad I don't buy it as anything other than hot air... Then again, maybe she was just trying to distract sempai while she stripped?

They're the same age ya know. Not that Miku wasn't the sort to concot elaborate bullshit for le shitz und giggles ofc...

and the comic seems to run off magical girl identity logic, so having the exact same face won't tip anybody off.

I mean tbf for around a century now Superman has gotten away with nothing more ambitious than a change of clothes and some dorky glasses...

Speaking of, just yesterday I finally got Thermal-EX to max pot. Now all I need is one more Lancet dupe and all the toasters will be maxed out ' ω')v

Doctor is voiced! Sounds female too!

"No John, you are the waifus"

...mind you in my SV-8 farm setup I just have Flint punch them dead then activate her S2 so The First walks by into Mon3tr range. :P
They have dummy thicc HP but their def is garbo so fast light attacks shred them.

They incidentally don't do it when they're stunned so roll out your Manticore/Ash/Eunectes S2s and suchlike if necessary...

Lol. Good to know. I didn't even consider they'd not use their ability when stunned. I dealt with them old-fashioned way. Killing them out of range or bursting them.

Learned it half by accident. Ecko or Kyo mentioned in their SV-6 guide the alternative of using a Sniper with high burst, like Exu or Ash, to deal with those buggers and I was like "hey Ash's stun means I don't need to reserve a slot for a blocker right?" Then I noticed she wasn't taking the expected damage despite being within the AoE...

Ya, not bad job filling those big boots esp given that she's a newbie if I understood correctly. Her pitch is sufficiently higher to be noticeable but she nailed Plat's "sarcastic jaded student who's been through too many shitty temp jobs" tone well. 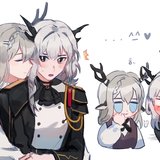 ^West Taiwan pettiness at its finest

this town has some pretty wild random encounter tables

However, I was barely figuring out the sanity thing lol especially the one non-attacking enemy.

The rock-crab thingies? They just release AoE Arts and SAN wave at certain HP thresholds. They incidentally don't do it when they're stunned so roll out your Manticore/Ash/Eunectes S2s and suchlike if necessary... 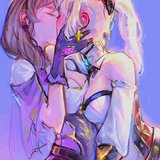 Oh yeah and the boss battle theme is amazing.

-- Eunectes is a very easy pick. Nice timing, since we got her hot skin.

"Well, look what we have here! Your body's pretty well built!"
- Gavial

...no way in Hell that doesn't count as a pick-up line among the Acahualla. ( ͡¬ ͜ʖ ͡¬)

Anyway, pretty interesting and very "Arknights" take on Shadow Over Innsmouth this sidestory. Finally explains some puzzling things about just what the heck Aegir actually is and some more aspects of this world's peculiar geography. Starting to sound more and more like the planet might be in a supercontinent phase tbh with the "known world" more or less "boxed in" - the frigid north and hot south too hostile for human(-like) life and the ocean to the west full of Chthulhu. The distant East is still a bit of a question mark tho. It could then be idly speculated that there's a similarly habitable zone in the southern hemisphere past the equatorial hotlands (assuming the landmass extends that far), but establishing any kind of contact is probably a no-go until both regions invent the equivalent of shortwave radio or somesuch...

Also Anita is totally mad gay for Skadi isn't she. And The First To Speak is pretty amiable for a bizarro eldritch sea-monster thing running on Blue And Orange Morality and some kinda low-order hivemind to boot by the sounds of it, while Lucid Specter is... actually kinda scarier than the usual crazy one.

~80 pulls, p2 Kal and still no Skalter. Also Giant Samurai Crab is now p4 but be strange if she wasn't, really.

I don’t see the appeal in the MC

Does she give off some special pheromones or something?

Oh this is good. Suffer and Baiser have always been the two with the worst "comunication" between them, but I feel like that's about to change.

Well, depends on how you define it. They rather seemed to enjoy going all out at each other...
If I were to guess where Baiser resonates with Azul's masochistic side with Sulfur it's the mutual thrill-seeking adrenaline rush of serious combat instead. Her reaction here kinda reads like "that's my Sulfur, defiant to the end *sniff*" too.

I'm getting the vibe she doesn't quite know what to do with Magenta tho. She's never really developed the same kind of intense relationship with and interest in her as with the other two - though Korisu seems to have started picking up the slack there lately (poor Mags...).

Well, we're due the anniversary event in like a day or so which comes with a ton of free shit so if you wanna give it a shot now's a good time.

I may have noted this before but Utena gets off a little too much on Kaoruko's persistent efforts to outright murder her... What a thrill~ combined with the usual teenager failure to grasp your own mortality I guess. ¯\_(ツ)_/¯

I mean, it's magical girls giving their best. It's exactly what Utena lives for.

Magical Girls don't normally opt for lethal force as the default first-choice method for dealing with villains ya know... Utena seems to have something of a dangerous fascination with Kaoruko's convention-bucking straight-for-the-jugular Heroic Sociopath approach and definitely gets a huge rush out of putting her life on the line against her. (That Bitch In Sheep's Clothing aspect probably also resonates with her own duality issues.)

Probably part of why she's so stoked about managing to push her into a Super Saiyajin level upgrade as given the pretty rapid evolution Baiser's undegone lately Sulfur has definitely gotten rather powercrept - and it's just not the same without the thrill of real mortal danger, is it?

This is a modern setting?

And they're out in the city? I thought they said the girl never left her family estate?

You might have noticed pretty much every pair is different people in different contexts.

I may have noted this before but Utena gets off a little too much on Kaoruko's persistent efforts to outright murder her... What a thrill~ combined with the usual teenager failure to grasp your own mortality I guess. ¯\_(ツ)_/¯ 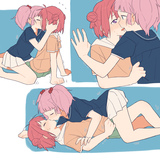 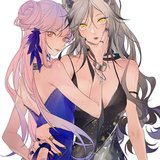 Probably worth noting that Schwarz's bio gives her "Combat Experience" as 20 years and she specifically mentions having been a "child assassin"... so if she's a bit 'off' at times she's got a pretty solid Freudian Excuse.