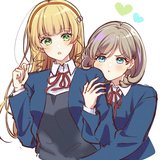 They're basically two tsunderes in a relationship and I'm loving it.

I know this series is ecchi and parody and stuff but aren't Sayo's boobs way too big for a 14 year old?

14 is well into puberty for a lot of teens, and development happens at different rates and different degrees. I read a story once (can't remember where) about a girl who's boobs were so big in middle school that she wanted reduction surgery because the other students and even the damn teachers were bullying her over it. It was really disheartening, but it gave me a new perspective. I was a late bloomer, very short and scrawny until my second year of high school. It made me an easy target, but I never thought that being on the extreme other end could do the same.

Yes. One of my friends in High School developed early.

All the boys thought she was a "slut" and picked on her. She'd get told off for wearing shirts that looked fine on anybody else for dress code.

People just suck in general, and if there's something they can bully someone over, they will do so. 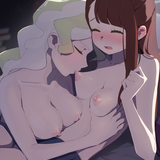 ^ I think it's Akko-top, though I'm not picky. I just love Diana being all flustered.

I can just imagine her saying, "Akko."

^ This manga never slows down, even for character development...

I'm sticking around, since there are so few yuri vampire manga series and my favourite one (Kokono-chan Drinks Tears!) will never be complete.

^ Yes, this looks like it's from the show! I can die happy. 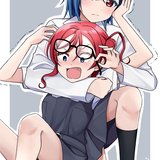 OMG, the last episode was awesome! Shiki was sooo jealous when she thought Mei was in a relationship with someone else. And they came straight out and said it too, the thing with Ren. I was REALLY surprised. I bet the next episode will just up the gayness.

These two are either on the verge of becoming a couple or are a couple. Can't change my mind. 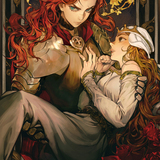 ^ Definitely recommend Sword of Paros. It's on Mangadex.

While I enjoyed it, it was very angsty.

I wish there is more yuri manga about female knights and princesses. 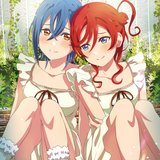 The latest episode was even gayer. 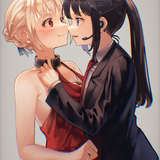 I've been waiting for their adorable outfits to make it here.

There's so much fanart of them on Danbooru!

I'm so happy this is being translated again! 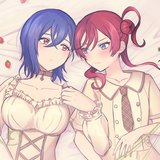 The latest episode was super duper gay. I didn't even have to put on yuri goggles! I'm still not sure if I ship them since they haven't had much time together in the show, but all the other girls have a girlfriend (s).

And this is so cute. Ren finally gets all the girls.

I felt so sorry for her in the first season. Keke had Sumire and Kanon had Chisato but who does Ren have?

That great ass... I burst out laughing.

And yaas I hope this manga does the underboob sweat.

No, the other girl is fighting over Kaori, not Kaguhara. So she wouldn't be part of Kaguhara's harem.

I'm very used to writing walls of text that then nobody reads/replies to and honestly at this point I barely bother to post, because it feels like a waste of time, so I forgot to thank you in my previous post for proving to me yet again, that it indeed is just a waste of time. I hope you'll appreciate experiencing for yourself how it feels.

Talking only for the record I'd like to state I've read all of Eromancer's posts as well as yours and everyone else's, and I found the debate very interesting. I only wish civility would be a greater concern for all involved.

Agreed, very interesting conversations going on here, but then it turned to insults and low blows and it became less about the manga and more about being mean.

I am glad that a ten-year-old manga is getting such interesting discussions, though, and that people are still into the series.

I do want to speak to some of the certain points Eromancer is bringing up with a few quotes:

Nowadays, being "queer" is actually seen as kind of cool in American culture, especially among younger people. Despite what manga tells you, that is not generally true in Japan.

But the biggest reason I say it's unrealistic is that only a certain percentage of the population is gay (which is a more restrictive group than "doesn't quite fit into heteronormativity"). That percentage is growing, but it's almost entirely due to more people identifying as bisexual. So anyone who does care about realism (not saying anyone should) shouldn't be triggered by the idea of some characters being bisexual (I'm not directing this at you - someone else here seems to have a problem with it).

In this manga, I can count how many male characters there are on one hand. This happens a lot in yuri manga, where guys don't exist. This obviously isn't realistic. People can make unrealistic things and have an idealistic view of the world.

Also, I want a source for the increase in percentage for more people identifying as bisexual.

And, while manga should not and should never be taken as gospel for what happens in Japan, I think most people know that Queer people aren't accepted there. It sounds very condescending with how you worded it.

They don't shy away from intimate affection in the way men do - they can say "I love you" without having to suffix it with something like ", man ..." in order to make it clear that it's platonic. Granted, there is some scientific evidence that female sexuality is a bit more fluid (the old "college lesbian" trope) than for males, so a sexual thing here could still be somewhat plausible.

This depends largely on the people.

Well if she's asexual, then she's definitely not sexually attracted to her - although I imagine that by "asexual" you perhaps mean something more like demi-sexual in that she can only fall in love or experience sexual/romantic attraction with someone after getting to know them. And the problem with that is that Honoka clearly demonstrates arousal at the idea of sex between males.

This does not matter. People can be bisexual, which I think you mentioned. (I am not running on very many hours of sleep here. Please excuse the formatting if I messed up the quotes).

This seems to be a sticking point for many, that Honoka writes and is sexually attracted to male on male romance.
Sexuality is fluid.

Also, asexual people can fall in love and get into relationships with other people. Asexuality is on a spectrum.

That, and demisexuality. People can be bisexual and demisexual. So, Honoka could not have liked Eli that way when she was wearing a skimpy outfit and was still bisexual or a lesbian.

That, and lesbians can be interested and drool at BL relationships too. My friend is a lesbian and she loves reading BL manga and never reads yuri manga. She has a girlfriend.

Personally, though, I think both Eli and Honoka are bisexual.

Also, dude, if someone is having a conversation with you on the Internet -I mean it's the Internet, so it's whatever- you should read all of it before quoting stuff.

It started with Honoka coming over because Eli lived with two gay guys. (I remember her saying yes after Eli told her about this in an early chapter.) I think Eli liked Honoka -love at first sight "she's so cool"- and then Honoka fell in love along the way. All my favourite ships in one place... is this Heaven?

I actually liked this. I clicked on it because it had the kuudere tag.

I wish there was more. ^^ It could be when she was turned into a vampire, she was curvy. I read a book where any wounds you get or how you look is frozen in time as a vampire.

Snapdragon beans
The Story of a Villainess Seducing the Heroine discussion 14 May 17:38
Quote

^ Not with that attitude!

Ohh, it's by the same person who wrote "Liar Satsuki Can See Death."

I wondered why the art style seemed familiar.