Oh, I think the class trip made it absolutely clear that everyone else in the group thinks of them as a "couple" (i.e., very best friends more emotionally tied into one another than are the rest of them), just not (necessarily) that kind of couple--the kissing, having sex, having-each-others'-babies-forever-in-real-life kind of couple.

"Of course we all grope each others' boobs--but not like THAT!"

(And if anyone knows or strongly suspects, my money would be on Rei. . . .)

For a long time, I've been wondering about this and this. Thoughtlessly shoving them together simply because it's convenient and wouldn't bother her, or has Kumako noticed that they're not comfortable being that close together? But, well, it never came up again, so it's almost certainly nothing. Rei does seem more emotionally keyed into things than the other two, maybe.

I think you're right when you said earlier that what might give them away is that they're the only two in their friend group who aren't perfectly fine with groping each other, and Nanoha keeps running interference to defend Chidori's breasts...

Does anyone have the specific chapter(s) where Nanoha's little sister keys us in that she knows about Chidori?

Does anyone have the specific chapter(s) where Nanoha's little sister keys us in that she knows about Chidori?

Here. (It's literally the first time they meet. This 12 year old is the smartest character haha).

I must read manga too much, cause I can't help but see this as a flag.
Like because they said it out loud that we're gonna get the 'not going to the same college' arc eventually.

lmao she's so proud of herself for deciding that

That was one epic troll by the mangaka, leading us to believe that Nanoha was going to make a New Year's resolution of a serious nature about trying to get serious about school or get her thoughts about her future settled so she and Chidori can be more secure in their plans. Then NOPE! Forget that! Resolve to do what's REALLY important! 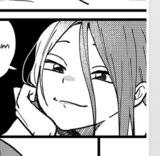 So Chidori's resolution is just to have sex with Nanoha, right?

Hell yeah girl, get it.

It's been a slow built, but these two have definitely grown a lot as a couple. I hope we'll get to see quite a bit more of that! It does feel like we're heading into the final stretch though.

Wow even Chidori is going down bad.

Not all that different a resolution, if slightly more difficult to keep.

I admit, I laughed more than I expected to. :D

I wonder when they are coming out to their friends

Mammaries, light the corners of my mind. And best to stare at, and utilize, all those curves of our younger days.

I wonder when they are coming out to their friends

Being more open could mean telling their friends about it