Forum › A Room For Two discussion

^ Looks like cotton candy. I hope Kasumi doesn't try to eat it.

Wait, you tell me that Pink Christmas tree exist ?

Not just in Japan, in the West too.
In America, aluminum Christmas trees painted pink used to be very popular.

Then the 1965 animated TV movie "A Charlie Brown Christmas" came and killed the aluminum tree market, lol, especially for pink ones. Such are the evils of Western animation... 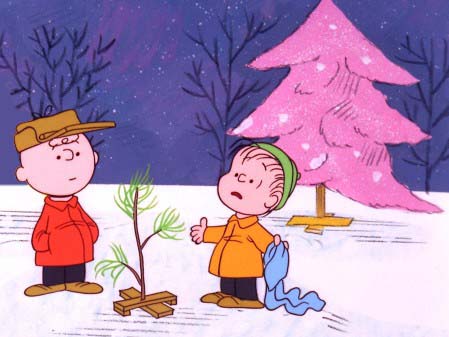 On the right, the evil evil pink Christmas tree
In the middle, between the two characters, the tree the movie recommends
Screw the author's message, the pink one looks better to me

One of these days, Sakurako is going to have a giant cake delivered to Kasumi, and then she's going to pop out of the cake, dressed only in sexy lingerie...

... and Kasumi is going to get VERY ANGRY, coz she was already salivating at the idea of eating such a huge cake and Sakurako ruined everything. ( ͡~ ͜ʖ ͡°)

Lol
I'll bet good money that Yukiko has already thought of that plot — and we will see it happen in some chapter to come.

^ Looks like cotton candy. I hope Kasumi doesn't try to eat it.

She isn't the only one we should all hope will not try to eat the pink Christmas tree...

What a coincidence. I read the chapter in which they put up and decorated their Christmas Tree on the same day my parents, brother and I are putting up and decorating our.

Two pages? Pixiv has been a bad influence on Yukiko... 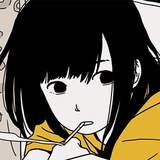 That last chapter was way short.. Is it getting cut down to shorter chapters or it was just a bit of filler?

That last chapter was way short.. Is it getting cut down to shorter chapters or it was just a bit of filler?

I don't know, it's probably the classic short for starting the volume but since we still don't have chapter this month it's hard to know.

Hey! I don't read this but here's another official "What manga would you like to see animated?" poll and #75 is this manga... so go and vote, or vote for Omuro Ke ....just don't waste your vote on komi san or any generic shonen from Jump (they'll get animated past 80chapters with or without your help).

^Ah, thanks! Seems to be the best choice there this time, yes. Although 26 and 62 are also tempting...

Understandable, have a good day. Honestly, even if Futaribeya is my all time favorite, i know how popular Tadokoro-san. is

I thought about it but is just too early to vote for it, we might get like 10 chapters at most and it would only be a 5 minutes per week or less

I know it's not /u/ but the heck, this list includes 見える子ちゃん. Room For Two works nice as a 4-koma, I really don't need it as an anime. Mieruko-chan meanwhile would be awesome ... those creepy spirits animated, oh yeah ...

Button for the actual voting page is at the top and bottom of the page, you choose the series from the form there.

Also there were no new chapter last month, probably due to Yukiko doing a chapter for the Yuri Drill Anthology. We will probably had one this month.

Button for the actual voting page is at the top and bottom of the page, you choose the series from the form there.

Ps why do most manga/anime girls have virtually no alcohol tolerance? And the ones that do are usually depicted as alcoholics

Aside from "it's girly and proper to not be a hard drinker" (and can be played for cute humor), low body weight and inexperience go a long way to make alcohol hit like a truck. Also, alcohol tolerance like lactose tolerance can differ across various populations thanks to genes that code for enzymes related to metabolizing alcohol - basically people with the different genes don't process alcohol as well. It's far from absolute, but Japanese people are one of those populations with a (relatively) high incidence of low tolerance.

As far as the second point, well, one way to build your tolerance is to drink more...

Also: drinking slower, eating before, being fat, and some medications can also do it (dont do this one)

Thank you for answering (and the drinking tips). You make good points and I agree with you. But about the Japanese people and alcohol tolerance, I feel like that might be a stereotype (I haven’t done research on it so I’m only speculating).

Anyway, my initial question was referring to how alcohol tolerance seems to be exaggerated in manga/anime. I’ve usually come across stories with women who either have no alcohol tolerance (like here) or have drinking problems. Rarely have I seen female characters depicted as being able to handle their alcohol without implied alcoholism. Here Sakurako is a high school student, so low alcohol tolerance is expected since she has little experience with drinking. But the girl didn’t drink a bottle of beer, she ate whiskey bon bons. Chocolates with alcohol have very little of it in them. Even if you eat a lot, they’re not meant to get you full on drunk. That’s why this felt exaggerated and unrealistic. I’ve noticed this pattern often in manga and just wanted to point it out.

So your first point, basically girls not being able to handle alcohol is “moe,” is the only reason I can think of that author’s depict their female characters this way. I didn’t mean to buy college essay from https://answershark.com/buy-college-essay.html, please excuse my blabbing

If you have a low tolerance you can definitely get a pretty good buzz going just by munching out on those little liquor bottle shaped chocolates because I've done it before. I never drink, but I am a fiend for chocolate so I've sat down and eaten through over a dozen of those things before and I was definitely not sober afterwards. There is however no way you could get seriously trashed on them unless you ate stomach churning quantities, like 100+.

It depends on the chocolates, as some have more or less booze in them but the little chocolate bottle shaped ones have quite a bit. I would put eating a bit over a dozen at like the same as at least drinking a good bottle of beer. I've eaten a ton of some lesser brandy filled ones and never really got a buzz so it does depend on which ones you get.

I should also add for those planning to try it, be ready to feel pretty blegh afterwords. The combination of sugar, fats, booze and chocolate really isn't great for your stomach.

“And by the way, everything in life is writable about if you have the outgoing guts to do it, and the imagination to improvise. The worst enemy to creativity is self-doubt.”
― Sylvia Plath

I wished someone pick up because not only Yuri Ichido upload on other works are kinda sporadic but we are already at Ch.63 in the raws and the gap is getting larger.

Maybe because the series has been licensed? I hope somebody takes it and continues traslating it, but it doesn't seem this will happen soon.
It's sad for me because I don't think Futaribeya get licensed in latin america any time soon so I can buy it locally.

Maybe because the series has been licensed? I hope somebody takes it and continues traslating it, but it doesn't seem this will happen soon.
It's sad for me because I don't think Futaribeya get licensed in latin america any time soon so I can buy it locally.

Futaribeya has been licensed since long ago, and Yuri Ichigo has been scanlating it still after that, and since other manga that are also being scanlated by Yuri Ichigo suddenly stopped coming here too, I think something else is amiss.

I hope the people at Yuri Ichigo are alright

that ch is too sweet i need insulin