C3 Bu's anime was great, and so is the manga.

I hope not.. it was awfull for me. The anime was great, yeah, i really enjoyed it and i was excited, but as soon as it got Angsty and "mind-screwy" it was just weird.. 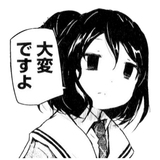 No it doesn't, it has a little bit of drama here and there, but stuff gets resolved in a timely manner and everything actually works well in terms of the whole plot, there are a few satisfying chapters in that respect. There is no trip to the dark side here nor any mind-screw, for better or worse.

The manga is really pretty normal, not exceptional, but I think it's quite fun in its own respect.

I'm only about halfway through the anime currently, and I think I like the manga better. It's got a much more normal slice of school life feel than the anime, where I'm sensing all sorts of dramatic tension. The plot and personalities even seem to be a bit off to me, not to mention the weird stuff being referred to as "mind-screw" here. Seriously, she doesn't see or imagine weird scenes like battlefields in the manga except for once that I can remember. Not saying the anime's bad though. Just quite a bit of a different feel to it, enough that I might even say it's a different genre.

in what sense the anime is dark?
this manga was good, but i liked it more if there was just a little more of mind-screwing (and more softgun-action too)

Over already? Well, it was a very good ride while it lasted :)

Yeah, apparently the manga was cancelled while the anime was airing, likely due to poor sales and reception, so they just had to end it with the chapters remaining until they could close off another volume and that was it.

The 4koma's second volume was just outright cancelled along with the web version, so only half of the strips were ever printed (along with a few in the third manga volume to pad it out a bit). Well, at least Midori's still doing stuff, she's drawing Ninja Soccer now and I sure hope for some background cameos.

Lucamarte, the general opinion is that the anime went too far into the Darth Yura plotline which sort of made it "dark", though not really in a "grimdark" sense.

Commentator, the personalities were pretty much set in stone in the prequel manga already so they worked off that in this manga, but the anime went another way indeed.

Speaking of which, while it's a pain to scan the middle school volumes and hardly interesting to many (it's a weird 4koma + normal manga chapters format, too), there is that crossover with Anime Tenchou also hosted here that can give you a taste for the prequel despite being more silly than anything.

thanks Artemiy, after your answer i was curious and i read the summaries of the episodes,
especially towards the end it's really different,
luckily i don't like to watch anime, because i really hate when manga and anime have different plot, or, worse, different endings.
i read in the anime yura became very good in airsoft, where is this in the manga?
and this was one of the few sport manga i liked, bah... money makes the world go round

This never happened in the manga, Yura's no airsoft genius here, just a hard-working girl that tries her best but obviously isn't even close to the level of the almost military-trained team leaders.

Is it worth watching?

i thought the anime was great, but it's a love-hate kinda deal once it gets to the super edgy dark yura parts + gainax ending.
i really enjoyed it, but i love those kinds of plots. its definitely different from the manga.

Is it worth watching?

Not really, honestly. The second half was really stupid and way over the top. Not the good over the top, obviously.

However, the biggest problem of the anime is that it's not Sabagebu.