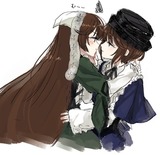 I would be pleased to see the follow-up.
Tbh licking scars is pretty sexy...

The heat is rising, but that aside, it's really cute!! XD

I NEED MOAR OF THESE TWO!!! AS MUCH AS KYOxAYA IN YURU YURI!!! 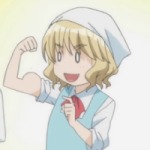 Finally some proper JunAi doujin for me to read :))

That’s very new of you Ooshima

This truly is the purest love.

Super sweet!
If you're interested in something slightly more H with these two, there's Dayfly : https://hitomi.la/doujinshi/dayfly-english-1461066.html

Sweet and cute, these two are great together.

There are several h-doujins of these two already translated, but none of them have been uploaded here for whatever reason.

so does this count for a Necrophilia tag

Great doujin, but I'm here to complain about the tagging. Recently I've seen the ecchi tag being misapplied over and over for some reason. Serious romance scenes aren't ecchi... c'mon.

(I say this as someone who normally avoids the tag! I don't want to miss good works like this one!!)

I'm not assuming anything. The way the tag is being used is just flat-out wrong.

Well it's used wrong according to your definition of the tag. In the west the tag is used for content that heavily features or focuses on fanservice and similar titillating material. It's "safe for work" only in the sense that it never crosses the line and doesn't contain any actual nudity. And whatever romance is serious or not, really has no connection to it. Sure it's harder to tell a story that everyone will take seriously when you have those, often forced, sexy elements, but by default, those two are not mutually exclusive. So yes, most of the time, you still wouldn't want other people seeing you watching/reading something "ecchi" even if it's not technically NSFW, unless you're the kind of person who doesn't care about what people think of you at all. Also it's really funny you consider that definition "flat-out wrong" and even correctly explain origins of the name, while seeming to be unaware, that in Japan, ecchi is used to mark NSFW pornographic content. Basically our meaning for hentai anime/manga is part of theirs for ecchi.

Nevri's right on this one. Dynasty has pretty consistently used the ecchi tag as basically NSFW-lite. It's stuff that's clearly meant to be lustful, or at least be seen that way by the audience, but doesn't cross over into nudity or clearly visible sex.

I don't see this policy changing any time soon.