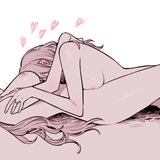 Gyarin constantly blessing me with Byleth x Rhea. Thank you for your service. 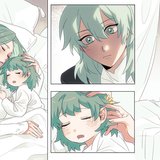 Am I the only one finding the dialogue in this chapter rather odd?

I barely if at all understood the conversation lmao

That credit page though lmfao

The dialect used made it very difficult to enjoy reading the chapter...

Not gna lie. Somewhat disappointed. Was expecting some :(

It's a game similar to Bayonetta in terms of combat. It was released in NA last year on PS4. It's okaaay. Nothing too special. The story also just throws you into the whole thing without any proper explanations or anything so you're left scratching your head for the most part.

Yeeeeeeeeessss!! Thank you so much for this. I was worried no one would translate it!

I read both and I actually like Pulse more than this, so probably.

I understand. I think i would feel like that if my favorite yuri artist, Takemiya Jin, started doing a het series too. Well, not crying on the pillow bad, but i'll definitely feel like i might not see another yuri story from her if she gets to passionate of succesful with that story.

Honestly, the day Jin wrote het would probably be the day the Earth froze over, so I'll take solace in that.

Not interested in this if it's going to turn het, so I don't blame the preemptive drop. The last few pages already suggest a het ending anyways.

Am I the only one who has trouble separating what's present day and what's flashback in this?

Lmfao.
Meanwhile, I can barely remember who is who! It's kinda sad ;_;

You guys should read the other works revolving around Yui. She's essentially like this through most of the stories lol.
Smooth womanizer who leaves women when they fall too deep in love with her.
Would still sleep with her though. That's some fine pick up line.

Only couple that really mattered! So freaking cute.

But she isn't out of reach. She's been in love with you since high school. If you just took that one step forward, you'd be in her arms x.x

Is this the last one?

Marina x Yuri! Woo!!
The pacing did change out of nowhere, but it's okay.
I agree with Yuricrunch. Shounen fight pacing is terribad. Shounens should have a fight concluded in 1-2 chapters x.x Specially things like One Piece that drag on for 20+ chapters.

I like how author treated us a adults and didn't spell everything. Sometimes life just isn't that simple.

The rest is different series.

Ooh, alright, thanks.
Well that sucks.

There was not enough development but they wanted to end it so I guess it's understandable that they rushed through this manga.
I'm still sad that it ended so abruptly, this could have gotten a lot more popularity.

None of which are particularly interesting.
orz.
Author hates us ;-;

I'm glad that we finally started to get some yuri. I was getting worried it was all just gna be onee-chan lusting after imouto with nothing happening.
So can I start shipping the Captain Lady x Yuri yet?

Not a fan of cheating, and Hotaru's personality kinda makes me tick, but will keep at it. Lets see how much drama and angst later chapters will give!

sarroush
What Does the Fox Say discussion 23 Jul 10:26
Quote

"Transmisogyny (sometimes trans-misogyny) is the intersection of transphobia and misogyny. It was coined by Julia Serano in her 2007 book Whipping Girl and used to describe the unique discrimination faced by trans women because of 'the assumption that femaleness and femininity are inferior to, and exist primarily for the benefit of, maleness and masculinity', and the way that transphobia intensifies the misogyny faced by trans women (and vice versa)."

Read a book it'll do you some good.

Precisely this.
He crossdressed to fool his sister's rapists and eventually help his sister murder them. He even explicitly said himself that he doesn't want to crossdress anymore because at the end of the day, he's a guy. That's when his sister cut his penis off and forcefully made him go through operations.

I agree with topkek. If you're going to label something, at least label it properly. This series is not misogynistic. If anything, with the way his sister thinks of men, what she did to him and how men are portrayed in this series, if labeled, it would be misandrist. Of course, labeling it as misandry is ridiculous to begin with. It's not like the author is going around thinking "I HATE MEN! MEN ARE THE WORST SO IMA MAKE THEM THE VILLAINS IN EVERY SCENARIO!" when it's been hinted that the encompassing 'bad guy' is a woman.

Is it so hard to enjoy a series just because it's about a main character who is an ex-serial killer, psychopathic lesbian womanizer who wants her own harem? I mean, how often do you see that in multi-chapter yuri series'? Apparently finding false labels to point at is what people are into lately.

She tried. But Kuroko stopped her. That girl at the end isnt Rinko.

tfw you go all "Kuroko can be sweet without being perverted or psycho" and then it all crumbles when you realize she just did it to get Rinko to stay with her so she could sleep with her in a few years >.> Oh Kuroko. At least she's waiting.

I absolutely love Chiyo though. The chapter where she went "I'm going to get my woman back" made me feel all sorts of hnnnnnngh feels. Chiyo, you're waifu material. I'm glad she's pretty badass and not just some background do-nothing character.