did they just enter stage 1 of yuri

loved this kind of ending!! eventho it will have a sad true ending when the girl grow old and the mermaid live forever 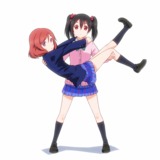 just really wanted to share my new found interest on the net, if only someone have the time to adept one of yuri manga here into liveaction ..hmph

i can never get enough of makixnico pair

http://dynasty-scans.com/chapters/stretch_ch02#9 . . .
ran seem to be a bit chubby before :O
imma do stretch"ing too

not yet yuri, still hanging in "shoujo-ai" ..
Ran on offense ..go get her girl!

Psychopath
You know you've been reading too much yuri when... 25 Nov 06:38
Quote

nah, yuri is my religion

the person who drew this must have heck lots of experience

the futon is ready, , so does my heart

goddess of yuri please forgive me for reading this.. i am sinned

is it game over already?

i love this kind of aangst which ends in happy endings.

it felt so much better in anime..either way it fun watching hotaru looking after her waifu senpai

I don't even know if this is yuri or not. I feel sorry for Risa who is gay in heart and don't know if Kazumi is gay or what, but if she is not, everything will go down the drain considering that a girlxgirl relationship requires attraction on both sides, work and dna sequences. I feel connected somewhat with the story which saddens me, since I met this one girl who I always talk to but we became friends, she has a boyfriend and all and likes guys but can't help but feel some sort of connection and we use to message for long hours. I know she will never like me that way, since I meet her even before she met her boyfriend. I have the disadvantage to live in a place were there isn't much lesbians. I feel lonely since I am girly and people automatically judge me saying I'm straight. I don't know if I will ever find the one. But I can tell you love is not obligatory. Even thought anyone can fall in love with anyone. Also sexual attraction is require if not it will all fall apart. I've live thru it. Hope Kazumi is gay indeed and things work out.

i think you aren't bold enough to state your feelings to her in the first place but not sure if its worth risking your friendship tho. how about you test her, such as told her that you haven't kissed anyone before and needed some kind of experiences for the real thing later then joke around with her that you wanna try kissing with her "in non-serious way to test her out so that won't reveal your real intention".. if she agrees look for hints if your bait is successful. told her that it feel kinda good.so good that you wanted to try n learn more...and more and more .. if she did strongly refused or gross out then better to back off saying that she's not cool since you deserve someone better than her or else it will jeopardizes your friendship...wish you best of luck!

wouldn't b surprised if this b adept to anime

usually not into supernatural but this is OK

ch27.5 the last page. .ran was so happy and return to her waifu as fast as she can