exactly bad faith as i said. i did not say this manga was guilty of it yet, and I didn't go excusing other media, in fact i actually included two different kinds that also contribute, i didn't say anything about violence not contributing, i think it does (look at decades of propagandist cop serials and how people worship cops and wanted to kill/wished death on protestors last summer, there's so much bloodthirst out there and unquestioning loyalty to the military) . I know porn contributes to rape and incest and sex trafficking. Yeah the old boomers in congress and pals of Epstein know nothing about manga/anime, that doesn't discount the large majority that do, or else know of american/western media that treads the same water, be it books, films, TV shows, etc. (I responded to that bc thats a new one).

its just so goddamn obvious that fiction is not a vacuum. Hell, you read the harry potter books and suddenly rowlings terfism is the logical conclusion of the values espoused in the book, that you can never escape your station of birth.

The "fiction doesn't affect reality" "debate" has been so poisoned by jack thompson satanic panic crap from the 80's and 90's. we know quite obviously fiction doesn't make you literally recreate whatever happens therein, but that doesn't mean there's 0 impact. If there was why the heck would anyone do literary analysis on anything (or for that matter write/make anything)?

The fiction people make is informed by their real experiences, biases, tastes, beliefs, etc. in which they present in some form, and the reader attempts to matches their own, to relate. Whether that's merely finding a subject entertaining, which is informed by those kinds of things, or aligning with those biases, tastes, beliefs etc. explicitly, it's still reflective of what is acceptable/agreeable etc., particularly if its meant to titillate or agitate (such as propaganda). When you sexualize minors in fiction (which hasn't happened in this manga, yet), or romanticize relationships between minors and adults, it is imparting a judgement, it is indulging if such judgement is "it's taboo". Just start asking why. Why does the author make it? (real world consequences?) Why do people read it? Why does it entertain? Why would someone want to read a chapter titled, "enjoying the scent of high school girls", a sentence that if said in public might have police sent your way by most people? Indulging in a "taboo" is disagreeing with how that thing is perceived by people and that can be as much as "just portraying it". I get it, high school is nostalgic for memories and first romances, immaturity can be funny, fucked up shit happens to kids, there's plenty of reasons to write about those kinds of things in regards to kids. They appeal to frustrated/sad/busy adults, and maybe can make things better for future kids, show how bad things are, or whatever purpose you ascribe. As soon as that delves into sexual stuff, those aims or designs are betrayed. An autobiography doesn't need to go into explicit narrative detail about teen sex, you'd be concerned for that person's health / be grossed out.

This story is pretty clearly dealing with late bloom sexual awakening of its protag via explicit sexual cues and how that affects your potential first relationships. For a minor to be introduced as a parallel, does not bode well. However, it seems she is more ingratiated because of Nakano's charm and the flirty atmosphere, which is a much safer route (i forget if she ever heard any of the main people or if she just had the complaint brought). It could be a "look what nakano missed out on coming to terms with her sexuality by not ever being around gay people at that age, how would she have been emotionally/personality wise?" deal. That tract can reasonably be entertained with no need to be sexual, depending on the person that can play such a small role in the way their attraction works, so why not play safe? why go there and invade, encroach on indulgence? If it's really such a hard idea to get, ask yourself if you'd want your own sexual awakening portrayed in a fictionalized film in explicit detail, done so by pure coincidence. It'd be embarrassing, disturbing, and extremely uncomfortable, even though it's a fictional character, to you and the audience. It's a topic better suited for subtlety. When this stuff happens in western media, like Big Mouth or Sex Education, it definitely gets more obvious when the actors, whose job it is to convince you they are a teenager or are actually teenagers down to every detail, play these things out. What is getting encouraged, what is being particularly enjoyed? Who is making it, who is it for?

Every little bit contributes to the very real and prevalent problem of pedophilia, and a lot of manga plays a role in enabling it.

I'll defer to this response if ever the issue comes up elsewhere. I'm tired of responding to the same bad faith, ignorant arguments.

yeah new girl should uh, have a classmate interest and then try and get relationship advice from our "virtuoso" nakano. would be pretty funny instead of uncomfy.

SillieHonka
The Two of Them Are Pretty Much Like This discussion 22 Feb 17:04
Quote

truck kun getting the harem he deserves... errr, rather the convoy I guess.

SillieHonka
A Yuri Story About a Girl Who Insists "It's Impossible for Two Girls to Get Together" Completely Falling Within 100 Days discussion 16 Feb 21:18
Quote

Me in high school before I knew that gender is the game where everything is made up and the points don't matter and I can just be a girl.

same, my gender is just whatever is the most gae at any given moment

SillieHonka
A Yuri Story About a Girl Who Insists "It's Impossible for Two Girls to Get Together" Completely Falling Within 100 Days discussion 16 Feb 10:59
Quote

Its the creepo rapey-ness AND the underage explicit scenes that im gonna duck out for. bizarre that the latter doesnt ever register. When you get into written stuff you'd think it'd get more obvious.

Life imitates art, as they say

ok, so basically, I saw another chapter, and i dont understand how people think this one is gay, like... this one is obviously not gay in any way, shape, or form. its just two gals sharing an umbrella, talking about how much they love fashion when one of them lost their balance, ok? Just two fashionable girls walking in the rain talking about the hobbies they love and NOTHING ELSE.

I mean it ceases to be just messing when you kiss the middle schooler. She's full on predator.

Being wary of paedophilia being positively portrayed equals moralizing, got it. The truth will catch up to you fuckers about lolicon.

The whole "she isnt grown up but her love is" and the adult getting bothered and flushed by the kid? Come on now.

Loli and wholesome should never go together. Upon reading this... yeahhhh no. 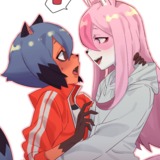 they shoulda frickin canonized this ship. ah well, at least there was promare

she joins the concert band though

Good god, this manga really blows everything else out of the water. Why do the good die young?

SillieHonka
My Best Friend's Engagement was Annulled. I Need To Do My Best To Stop It! ...But I Was The Reason Behind It... discussion 12 Dec 23:53
Quote

Because there was an arranged marriage in place, duh. They just added MC into it.

SillieHonka
My Best Friend's Engagement was Annulled. I Need To Do My Best To Stop It! ...But I Was The Reason Behind It... discussion 12 Dec 22:23
Quote

i wasnt mad about poly or bi, they just didnt show that there was actually like a romantic relationship between any of them. believe me when i say im starved for good poly content, but this was pretty crummy in that department.

SillieHonka
My Best Friend's Engagement was Annulled. I Need To Do My Best To Stop It! ...But I Was The Reason Behind It... discussion 12 Dec 13:35
Quote

the immortal/mortal pairing is always uncomfortable to me.

the fuck they mean "rip grandgrant"? Dude was a serial sexual harrasser and definitely lost his case against Llama. Fucking sus as hell. Can this goddamn fandom stop being gross for one week? I also noticed the gamergate-ism "vidya" in there too. For people that love saying "no politics in my gamz/animoo" they sure love to fucking do the very same.

this is the best manga on the site and its criminally under-read. Why the hell did this get axed? Great art, great comedy, well-paced, and a pretty realistic romance.