I love reading through the translation notes at the end. the detail about the pun in the title is so cool! also love manga that are more concerned with adult relationships... I often feel that I've "aged out" of reading most yuri because so much of it takes place in a high school setting, so I really don't visit this site as often as I did when I was younger :(

it's been like 5 years since I first read this, and now I'm just going through my old favorites list and patting myself on the back for having such good taste. this is such a sweet oneshot ;-;

ugh this is one of my favorite manga for the realism and nice art, but it really has me tearing my own hair out over how painfully non-communicative everybody is. ah well, c'est la vie

Unamended
The Solution to Sexlessness! discussion 24 May 01:20
Quote

we do love reciprocity in this house. finally, some good fucking food

god, they’ve come so far from the beginning... I’m so proud of their openness!! it’s so rare to get such a realistic depiction of the progression of a relationship

this chapter made me do a little fist pump of victory!! I’m proud of my dumb gay kids

Also yeah, it's kind hilarious just how "badguy"-ish End is. Looking forward to when he tells Saeko/Miwa that he's gay and just wanted to know if he could with them about it. (I'm not sure if that's exactly what I hope he does, but it's kinda hard to believe that he's gonna be an antagonist after seeing how hard tmfly is leaning in on that portrayal.)

that last page hit me like a rock. just fuck me up takako shimura

rei the real mvp afsgdhfjg god that made my heart GLOW

Except Rop said several times how other character comment on her dialect and how it is part of her personality, so yea again nice try on going against majority and ignoring the facts in your favor.

From what I read here, a lot of people, if not the majority, are bothered by the scottish english. Even if I didn't go and read all the comments here before stating my first impression after reading this chapter, I think I'm not "going against the majority".

Anyway, you're not the ultimate expert on translation, everything you state is just your opinions. You're entitled to them as I am to mine. Nobody made you God and because you translated a few doujins you've suddenly become an authority on what people ought to consider a good or a bad translation. Grow up.

YP did it their way but dropped it. Koyuri picked it up so they want to make their own tl choices that they believe are the best to express the original meaning of dialogues. I actually understand the issue of picking up translation after someone and having to decided w/e you keep consistency with it or do your own thing, but still I understand wanting to do things the way you think are better.

LOL. So Koyuri has a right to make their own tl choice and do their own thing even if some people don't like it, but not Mr.Catt? You're so full of shit, it stinks to high-heaven.

There's "respecting the original work" like you advocate and confusing the english readers. The two times I've complained about translation lately are because it made it difficult to understand. MrCatt's translation maybe was wonky, but it didn't impair the understanding. But you've obviously decided that since I didn't criticize him like you, and even encouraged him, I've lost the right to criticize any and all translation. Guess what? I don't care about what you think.

anybody in this thread smoke weed. I mean like. I’m not a fan of the scottish accent either tbh, but that’s probably just my american-centric brain talking. it just felt a bit out of place, especially since YP’s translation of the first chapter used something more southern 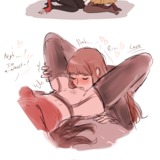 Unamended
The Flower And The Star discussion 31 May 05:34
Quote

I read this whenever I'm down :,) always manages to warm my heart

I’m happy to see tsubaki and tasuku developing well as characters, but I’m kind of dreading the next chapter now...

I used carry around acetone in my backpack to get rid of graffiti like that :,)

hoooooly hell that was cute!! every chapter of this makes my heart feel warm and gives me the urge to just. frolick in a field of flowers

this really deeply hurts my heart,, ssamba’s fluttering feelings really helped me on my journey of figuring out my identity as a lesbian and just... gave me a lot of hope and joy. I’ll miss her dearly

honestly pretty disappointed with this series, which is a bit of a shock, since I really love this mangaka’s work. the main character was just a total dick, and had no meaningful character development throughout. she just remained a clueless asshole to the very end

PAGE 11 UMI'S GAZE LITERALLY MADE ME ORGASM IT WAS FANTASTIC

Unamended
This One Goes Out To All The 17-Year Olds discussion 03 Oct 22:17
Quote

2 years ago I tried foie gras for the first time. I still vividly remember how amazing it tasted,,, I was in tears