MaartenAr
There Are No Mermaids In This Town discussion 02 Sep 14:13
Quote

This is one of my absolute favorites, hurts in such a beautiful way

Remains a classic, this one. The loneliness is described so accurately and painfully

This story had so much potential and delicious angst in the first few chapters but got bogged down in the side story and it felt like the author didn't know what to do with the characters...
The ending was hot garbage too 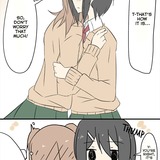 Agreed Bugdevil. Such a shame the manga ended when they were getting close. I wanted them to at least have a good kiss, meanwhile Haruka and Yuu had like 500

MaartenAr
The Tale of the Wild Roses discussion 15 Sep 20:36
Quote

"They really did love each other, even if they never said the words."

I love this kind of oneshot!!

Same here, the melancholy atmosphere is something I just can't get enough of!
For me the slightly sad tone gives the story a more relatable and more beautiful feeling.

MaartenAr
The Private Report on My Lesbian Experience with Loneliness discussion 22 Aug 17:12
Quote

I’m reasonably certain it’s a reference to something.

If that whole thing was just a clever reference and I got a little upset over nothing then I apologize.

MaartenAr
The Private Report on My Lesbian Experience with Loneliness discussion 22 Aug 17:04
Quote

"Kill all hu-mans" is sounding more sensible by the day.

Why hu-mans with the hyphen?

Also how does "killing all X" ever sound even remotely sensible?
I get that it isn't serious but the fact that just because a person's opinion is invalid or toxic in your eyes you would wish death upon them makes you just as toxic, if not more.

Take a joke people...
Calling someone a fagget is just a joke, not serious. And if you don't like it then ignore it. No one's forcing you to look at the credits page.
Pay attention to the cute yuri instead.
I look forward to more of this adorable series!

I loved the double entendre at the end! So romantic...

Is Hakamada Mera a guy or a girl?
I'm assuming a girl but it would be cool to know if there are any yuri mangaka that are guys.

Sad that this ended without a real romantic realization...
Does anybody know if the author will ever follow this up?

It makes me hope for more but.. I know I shouldn't.

The yuri lifestyle is suffering.

MaartenAr
The One I Love discussion 15 Jun 16:18
Quote

Good art, but having sex in the spur of the moment to replace someone else is a really bad foundation for a good relationship. That put a sour taste in my mouth, as it seems that sensei was taking advantage of the MC's grief.

I generally dislike lewd-based yuri and prefer more pure, innocent and monogamous relationships and I would have preferred this work to have had less what to me felt like sex for sex's sake in general. But I have to hand it to the author, the art was top-notch and the story had some nice development to it outside of having sex. It also had a cutesy ending, though again I think it would have been preferable to have seen more character development, friendship and cute fluffy yuri instead of endless debauched sex.

Why are there so few Aya/Youko centric doujins? It makes me feel really bad when I think about it.

Is the title deliberately "I don't believe love anymore"? Shouldn't it be IN love anymore?

Man this hidden gem really gave me the feels.

This couple does great justice to the meaning of the word "love". Absolutely beautiful.

What a cute oneshot! We need more similar content.