This is SUPER exciting. I loved Fragtime, but it's also just really exciting that an older, and pretty under the radar, yuri manga can get an anime!

For those upset about Girlfriends... it's honestly only a matter of time.

CubieJ
The Forfeit is a Solo Performance discussion 14 Jan 09:39
Quote

Almost warrants a Kotohonoumi tag. Maybe a sequel will make it happen. :')

Needy Nico and helpless Honoka is such a surprisingly good combination.

I, too, hate futa but really enjoy this author's stuff. It's very easy to do a trans reading of this (and Passionate Gaze) because it feels so natural and normal and relaxed, and regardless of whether that was the author's intention or not, it's nice to see!

Ohhh snap, that special... I think this is the first time I've actually wanted to run out and buy flowers on Valentine's day.

As an easier general rule of thumb, if there's scissoring and they're enjoying it, it was written by a dude.

Scissoring where the two partners are practically on their backs with their legs stretched out and entangled at odd angles is designed for a voyeur rather than personal pleasure, yes.

I don't really think there was any of that in this work though. Closest would be p73 in Chapter 5, but they were grinding on a toy held between them rather than each other. And even if there wasn't anything there, the way the position looks on p74 (one partner 'on top' during the act and holding the other one to grind on) absolutely works for many people.

The other two instances of tribbing (Ch1 p90-p91 & Ch7 p14) are also both real and very much possible to get a lot of pleasure from with the right partner.

Yeah, you're right. I think I am generalizing a bit too liberally. Thanks for not being a jerk with your reply!

But you're right, it is wrong of me to jump to the conclusion that a mangaka must be male just because characters are enjoying scissoring. I'm still positive that there are a lot of awful lesbian sex tropes that male authors use more than female authors, due to lack of knowledge or experience, or to target a specific audience, but I absolutely do need to check myself and stop going "ugh not again" every time I see characters enjoying scissoring, because sometimes it isn't just a sexy ignorant trope or an imitation of PIV intercourse, but an actual thing that people enjoy.

I think maybe I should stop trying to spout one-liner comments and stick with walls of text, because someone always ends up yelling at me when I don't make myself 100% clear, aha... ; v;

Also, kudos for literally going back through the entire series to see if there was any "bad" scissoring. I appreciate your devotion to the craft.

In any case, this series is a big win in my book simply because of the girls' enthusiasm. There is none of the customary coy "no/stop/don't/that's dirty/it's embarassing" nonsense. These girls all had sex together because they genuinely wanted to, and they genuinely (and mutually) enjoyed it. That's a great and all-too-rare thing to see.

Just wanna thumbs up at this, too. Long live enthusiastic sex!

I can tell this was written by a male author because they v is cover is fluid too must exaggerated fluid. There is too much juice everywhere those girls need to be checked.

As an easier general rule of thumb, if there's scissoring and they're enjoying it, it was written by a dude.

Also lmao oh my god you can't be that loud during a sleepover. Imagine Akira's dad the next morning trying to pretend that he didn't hear them (and the other 3 were probably going at it, too). Awkward breakfast.

This chapter resonated with me WAY too much for my own liking. G-good thing I'm not an otaku, unlike poor Shinozaki, haha... haha... ha....

As for the pacing of the series, I agree it's way too slow from a yuri-starved standpoint, but I keep tuning in and really enjoying almost every chapter, so I guess I'm okay with it.

Most of her works definitely have good endings and are more or less fun and lighthearted, it's just that she sometimes reminds you that she can totally break your heart if she wants to.

I think this is the gist of it. She's very good at sharp little needles of angst. Not overwhelming, suffering angst, or prolonged angst, but just... little "reminders".

Also, just for clarification, I wasn't actually complaining about angst. I love to suffer, thank you very much.

Only one page of angst from Takemiya Jin?! A new record!!
(Edit: For clarification, I ain't complainin'! I love Takemiya Jin and her works.)

Also I can vouch that glasses do, in fact, get in the way an awful lot. The "HO" shirt has reached a whole 'nother level of appropriateness. 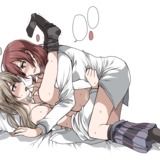 As soon as I clicked on this I FISTPUMPED TO THE SKY.
A true rarepair blessing.

Ploy is a Grade A bitch but then again Donut is also at fault for not speaking up and telling her to go f*** herself.
I don't need my yuri to always be fluffy and happy, but this just feels like forced angst. Hope they won't drag this out too long and Ploy will either change or be removed from the story soon. Ugh I'm getting flashbacks from that chick in Citrus.

I'm enjoying this series but I'm never a fan of jealousy subplots. ;;

For some reason when I first read it, I thought she was college-aged. I was temporarily very confused by the statutory rape discussion until I looked at the manga again and realized that they apparently are in high school.

I guess my brain just went "taking tests + prostitution = college probably". Too much "The Feelings We All Must Endure", maybe... or not enough?

For anyone wondering about other forms of protection: http://www.scarleteen.com/article/bodies/all_the_barriers_all_the_time

I'm glad to see so much encouragement of safe sex online. There's a lot of misunderstandings surrounding STIs, especially when there's no penis involved, since it's so poorly covered in sex ed, haha. That explains why people are so gung-ho on the internet about it, though. They want to make up for everyone's awful education.

Also thumbs up very cute manga. And nice to see such a casual approach to casual sex. I'm looking forward to more.

Restraining herself and tucking her in instead... that's... oddly adorable.

CubieJ, from what manga is your avatar? I know I read it before but I can't remember the name...

CRIES ABOUT KUMIKO AND REINA

There, now no one will be the wiser.

Very fitting topic, since we're all masochists for getting invested in this pair.

Honestly, this is worth rereading just for Umi's faces when she realizes Kotori is touching herself.

And thus, they had so much sex that they forgot to suffer and never had to worry about becoming witches. Thanks, Madoka!

You know, I didn't think I was into butts but I was so into this that I actually dreamed about it last night... imscaringmyself...

When ya see a pair tagged as NSFW and just get hella excited bc you know they gonna have the cutest sex ever. ; v ;

Uh, it's not exactly rocket surgery.

Judging by this response, you've either never actually tried it before or are some kind of wizard.

Maki and Kotori have obviously gotten some practice, if ya follow my drift. ;D

Seeing Kotori touch herself while giving oral at the same time, I'm like "ok that's hot but mostly that's REALLY IMPRESSIVE." Takes some serious skill to multitask successfully like that.