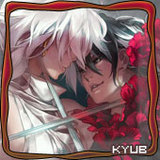 If they all get job, it will be difficult to know WHO IS NADESHIKO's GF! xD

Yeah, I do think is Megumi, but I pretend I don't know it yet. xD (wtf)

I fairly certain that it gonna be Megumi too...

Gonna make a gorgeous couple. Double-tsun when amongst friends. Double-dere when spending time alone together

Hate to punch holes in your logic bro, but you can't work that late part time. Especially as a student.

Just said that like literally the post before yours, to someone else who's only hunch was based off time. 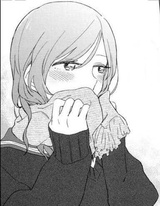 I don't think it's Miho because;

-Nadeshiko wouldn't allow her girlfriend to openly flirt with her because she doesn't want her friends to know.
-Miho is naturally flirty. She tells Ai to feed her the sweets. (CHANGED THE URL)
-I also agree about the 10:00 thingy, where Nadeshiko calls her girlfriend. Her "Girlfriend" might be Megumi because only Megumi works part-time job. She could be having a night shift or she could be working in her family's business that's why she can stay up late.

Tell me what you guys think! :3
Xx

PS Megumi reminds me of Sakurako. ;3

I think you're stupid because

-She doesn't let her, and you linked to MANGAFOX from here; another reader http://dynasty-scans.com/chapters/yuruyuri_oomuro_ke_ch16#2
-Nadeshiko offers to feed both Ai and Megumi in that same chapter, that's not being "flirty" in public as well?
-How does child labor laws.

P.S. There is an edit function for a reason. Use it; don't double post.

Well, I think you need to fucking calm down;
I linked MANGAFUCKS because, even though I like dynasty-scans, it's fucking slow to navigate pages. Fucker.

-First of all, you're ASSUMING that Miho is her girlfriend.
-well, Nadeshiko did NOT really feed Megumi. She didn't even let her have a bite. She was teasing her,
-megumi's not a FUCKING CHILD. IF YOU're such a fucking idiot, which you fucking are, she's 18 years old.

pS. You may now kiss my sexy fucking ass. ASSHOLE.

I'm the who who needs to calm down? You used the word "fuck" eight times in four lines of text. lol

it's fucking slow to navigate pages.

-Explained why it's her in a previous post, not assuming, Read the who thread.
-Irreverent, that's also considered being "flirty", as you would call it, and that still not not explain Ai. If your argument is that she does not want to do that in public.
-Child Labor laws apply to you when you're a student in high school. Plus that does not even matter, we know she does not work the night shift. In chapter 16 when they are out after school Ai asks her when her NEXT day off is. Implying she is currently off. So unless you think she works from 3:00 when normal schools let out till 10:00 at night, seven hours, Then it's safe to say she does not have a night shift.

P.S. Going to have to pass, thanks for the offer though.
P.P.S. Ah you learned to used the edit key, added some lines.
P.P.P.S. The only real counter argument is it being AI. Who always suggests doing things as a group. Because that would draw attention away from her wanting to be alone with Nadeshiko. But that's a bit to intricate for a series like this.

Aye, aye. Sorry mate. You've used the edit key quite a lot too, ey.
Anyways, so even if you're 81 years old (a ridiculous example) and you're studying in high school and you work a part-time job, you're covered in the child labour laws? As long as you're studying in high school, you're covered in the child labour laws, is that what you're saying? I thought a minor (child/juveniles) is a person who is someone under the age of 18. Correct me if, I'm wrong. And this time, I will stay calm. haha.

Under the legal age a being an adult (20 in Japan, 21 in the US), if you are in high school student you have to follow rules about working hours set by what ever state/prefecture you live in. You can legally be tried as an adult at a younger age depending on the situation, but that's something else entirely. But like I said that does not even matter because we know she works during the day, because she's asked when her next day off is DURING THE DAY in chapter 16.

P.S. Yeah a type fast and I make a lot of typos. I tend to go back and fix them when I think about it.

They are all in their school uniforms, showing us it is after a school day. She is then asked when her NEXT day off is, implying that she is off work at the moment she is asked. She would have to be off at that moment because she is heading to cake shop with the rest of the group. If she did work nights why would she need to asked if she had the day off or not because they would have been able to go to the shop regardless, because she would be free during the day already.

Aye, I understand. But we do not know when megumi starts working and when she finishes. She could be working right after school or not. I did not say that she finishes her work at 10:00 p.m. She could be off work already, but she and Nadeshiko set their phone conversation at 10 pm.

What I'm emphasising on is the 10 pm phone call between Nadeshiko and her Girlfriend. Why 10 pm? Why not earlier? Unless, she is busy doing something before that specific point in time.

Also, we do NOT know if Megumi works all the weekdays. She could be having a job on Mondays but not Tuesdays, just an example. 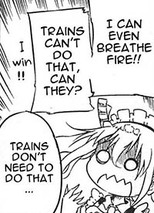 Hope you guys keep it calm a bit, otherwise the anti-shipping law will be hammered on us. We all would not like that, right?

I also think that Megumi mostly because unlike the other two, she appear to have a front cover in front of Nadeshiko. I means if it was Ai, she can behave the same way when she is along with Nadeshiko. Same too Miho, she will just put on her flirty mode as usual. Megumi however, her reaction alone with Nadeshiko will be different since they can't put on the little boke-tsukumi screen like they always do.

Megumi also has a bit of hidden side, with her part-time job was constantly brought up every time they are together. That showed her to be fairly responsible, and simply give her a bit more depth off the screen which can be set up for a tiny drama later (the cliche say that she might saves up money so she can move out and live with Nadeshiko later).

I don't know it's all wild chase now. But it will be more interesting for me to see that it is Megumi's

Lol.... are you serious bro? The whole theory behind Megumi being the girlfriend is that they talk on the phone at 10pm. If you dismiss the fact that it's because she works part time the 10pm rule could be applied to any of them.

You remind me a of a brick wall. I'm not sure how I can say this any simpler. Okay, it's after school and they are on their way to a cake shop. Ai asked her "when do you have your next day off", not "when do you have a day off". If she had enough time off then to go to a cake shop, why would she not have the same amount of free time to go to the department store they were planning on going to later in the week. Why does she need to be asked if she has a day off if she has that much free time anyway.

If you can't figure it out based on this you have some serious problems. My head hurts now from trying to simplify it so much. It's like trying to explain why two plus two is four.

Hope you guys keep it calm a bit

I will never understand why everyone thinks everyone else over the internet is mad.

Aye. I told you, I understand. What you don't understand was my aforementioned statement. Now go and read it again. Or if you're too lazy then don't. You misunderstood it, which is to be expected from the likes of you.

What I said did explain that. You wanted to know what time she started work, It was just explained. She would not need to be asked when she had time off if she had free time after school at that point anyway.

Her friends know when she works, why would they bother asking if they knew she worked nights. She would know they had free time to do things with her during the day regardless.

Good job. You're a genius. No sarcasm intended.

I'll be sooooooo disappointed if Miho is Nadeshiko's gf...

You better get ready then. 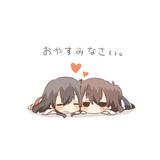 You better get ready then.

Sucks to you then I guess.

Well I gave a pretty fucking detailed explanation why it's not her. Because our residential brain surgeon Secretnamorifan11 is a little slow on the up take lol. Feel free to read it if you like.

I just read your explanation and it's hard to admit but you're probably right, BUT I'm still hopeful! :) We won't know for sure until it's explicitly stated who is Nadeshiko's gf in the manga