It's not just about making steps forward, because there's steps back as well, and those always feel more significant.

Only if you let them.

I know that sounds arrogant of me to say, but I only say it because I spent around half of my current life with that exact mindset.

"What's the point in trying when everything just turns out shitty anyways?"

"Why live when there's so much more bad than good?"

I grappled with questions like these for so long, and it eventually got to a point where I fantasized about ending my life in various ways on a daily basis for several years straight.

"Why not just end it now if I'm going to spend my entire life suffering and then die anyways?"

I would get so frustrated with myself that I was too incapable to go through with my fantasies... There's no cure-all approach that will work for everyone, obviously, but a concept that really helped me reach a healthier mindset was the idea that pain isn't this terrible thing that must be avoided at all costs to live a "happy" life. People can live through pain and grow from it, but only if they give themselves a chance. And yeah, that's easier said than done, and I don't know what you've been through before, but I know that both you and I have gone through some shit, and we're still standing here. There came a point where I just realized, "Hey, I can survive the torture of my own mind. I've done it for years. What is there to be so afraid of then?" Gradually things started to feel a little easier after that.

Every time she does something good, it comes crashing down at the end. Yes, she went out to a festival. That's great, getting out of the house is great. Then she got separated from her sister, and, upon reuniting with her, was humiliated.

So she got separated from her sister. No big deal. They were quickly reunited; nothing to worry over. And she was humiliated. In front of some random highschoolers and old friends from middle school that she almost never interacts with? Who cares? I'd argue that Neeko has four, maybe three, people that actually matter in her life: Her parents, Imoko, and maybe now Uri. And all of those people still love and support her, even knowing the things she was "humiliated" over in the first place.

That night Neeko had a ton of fun spending time with a person she loves and is loved by. There were some small bumps, but I'd say she's doing pretty good if she's still able to admit to herself that she was having fun (there was a few years where I was/am convinced that I hadn't felt any positive emotions in that time span, and felt isolated as the important people in my life were either coincidentally depressed as well, living very far away and in low contact, or deceased).

Well, that's a lot of rambling from me, and I hope it didn't come off as if I was trying to preach my beliefs, because that wasn't my intention. I'm not trying to belittle anyone's struggles, tell anyone to think the way I do, or anything like that. Rather, I just meant this as a response to the comments saying things like,

It's not funny for people that actually relate

Because I can relate some of my past experiences to Neeko, and feel like I can even relate to the present sometimes as well, but to me this manga has been about watching Neeko grow, and I think if you go back to the beginning and pay close attention, you will see that Neeko has been growing, ever so slightly but steadily. And I think that's because Neeko hasn't been letting her steps back be more significant. She does sometimes take some steps back, but overall her steps in the other direction have been even marginally larger, and in the end that's how you move forward. 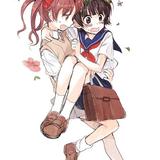 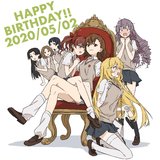 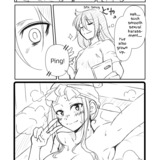 Tomoko's got her priorities straight.

Had to do some digging but it looks like it was called Session 9. It's a horror film.

@gootznbootz @DoubleEspresso_ @Advance Tabco The original comment reminded me of (Big spoilers for related anime): Samurai Flamenco Although it doesn't perfectly match the description, but if anything, I'd say the twist was more similar to the one here in the manga.

I'm bored, this is tangentially related and not well known so Imma just mention the Westermarck effect. It's the reason why people find incest gross incase anyone is wondering.

Huh, that actually makes a lot of sense. I think I've heard that it's also common for siblings who were separated at birth to be attracted to each other after reuniting, so that would go to support that theory. 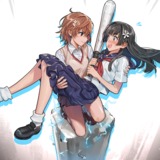 Controversial opinion maybe: Kuroko would be (is?) the most interesting character of the series if her personality wasn't constantly butchered for bad comedy. Not that the competition is especially fierce.

I guess I'm an April fool because I didn't catch on until I read the comments.

You're not alone. I thought this was supposed to be some kind of satirical commentary on homosexuality in Japan... 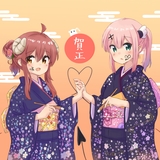 Terraformars is right, it's the Zodiac symbol for "rat", because it's year of the rat.

My speculation is that Uri found a job that she thinks that she and Neeko can work together, but knew that Neeko would turn reject the idea immediately, so she went over her head and told her mom instead to let her handle the rest. Hence this discussion. 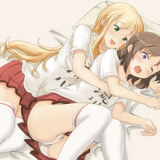 I happened to walk by a live Locodol performance while I was in Japan. It was pretty surreal... but I couldn't help but think of these two characters. Nice to see more of them. 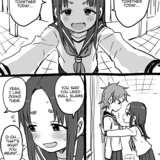 You know, I always felt like there was something between the two side character girls (glasses girl's friends) in Takagi-san. This makes it seem almost plausible that I wasn't imagining things...

@BugDevil Thanks, I was planning to make my next response in a different thread as well. I'll get back to you with a proper response... sometime this weekend probably. Maybe tonight, maybe Sunday, depends on what I have going on. 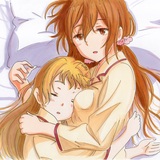 @BugDevil My point was more that KyoAni often takes such large creative liberties with their adaptations that you should (in my opinion) just consider the adaptations and their respective source materials two completely different stories. So making an argument about one while using evidence from another doesn't really hold water if you think along those lines.

You guys do realise the author only does het. Don't get your hopes up too much for the yuri, it's only a fan service manga.

Hmm, this comment prompted me to do the bare minimum of research. It looks like Aldehyde has drawn at least two full blown yuri manga before. Also, if the front page wasn't indication enough, It's Tough Being Neeko is published in the same comic as a lot of other popular yuri manga, such as Cheerful Amnesia, Sekai de Ichiban Oppai ga Suki!, Tonari no Kyuuketsuki-san, etc.

I'd still remain highly skeptical of there ever being any yuri in this, considering the pre-established tone, but maybe it's not as impossible as I once thought..?

My yuri goggles seem to be malfunctioning. They automatically increase intensity levels whenever Uri shows up... 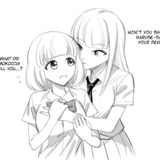 Yuu's not even thrown off; she's been friends with Tomoko for too long.

@BugDevil I feel like when it comes to KyoAni, you just have to treat the source and the adaptation as two different canons, for any series they do.

I get the feeling that there will be a twist next chapter. That Hino didn't actually do anything similar to what she does with Koguma, but something different that would still upset the new character. I can't really think of a good example, but something like sitting on her like a human bench or something. Something that's not as intimate as what she does with Koguma, but upsetting for the new character to think of happening to Koguma.

^This comment isn't really a spoiler, but just me trying to guess the next chapter. After thinking about it, I decided to put spoiler tags on anyways, on the slight chance that I was right and I accidentally ruined it for other people. But it's just me speculating.

Kuroko is actually funny as a gag character for once? 何！？！？

Oh wait... That comment was really old and someone already responded to it saying pretty much exactly what I did... Why did I make that reply? Oooooopppssss.... 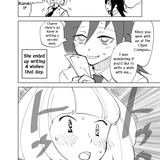 Saying that is implying Ucchi ship is popular when it's not even in the slightest.

Fanart, doujins, and comments imply otherwise. Where are you getting this information from?

And if you ask some persons, Asuka and Yuri will had already show romantic feelings,

That's why I used the word "irrefutably". There's a much stronger case for Ucchi than Asuka or Yuri on this topic.

Anyway in the end, Tomoko will end with nobody because it's not a yuri so they will just endep up as a huge group of friends.

It was just a hypothetical.

Also, i take it that Shimamura's sister didn't want the boomerang, then?

The boomerang was always intended for Adachi, right? She just told Nagafuji it was for her little sister because she was embarrassed about their date iirc. I should probably actually go back and read the manga to make sure what I'm saying is true when correcting someone, but I'm pretty certain that that's right...

Yes but i think she didn't said it explicitely in the manga.I think she explain it in the LN.

I haven't read the light novel that far, so I definitely knew it just from reading the manga...

It's been two volumes of nothing but Adachi being a useless lesbian and little to no focus on Shimamura's perspective whatsoever. I'm starting to lose hope that anything's actually gonna happen here.

I won't see it as yuri until Adachi (most likely) confesses

Getting flashbacks to early Girlfriends discussions.

Edit: I'm an idiot and redundant.

Can Shimamura get any more oblivious? Adachi is practically drooling all over her and she still hasn't figured it out? How? It literally makes no sense.

She's seeing it and pushing it into denial. Because otherwise she'd have to be emotionally invested, and at some point she decided that that was no good. So she built a wall.

But Adachi's Big Gay is so big and unrelenting that that wall is taking serious homo damage, lol.

Not to mention that Shimamura has the, "Adachi is clingy because she's been emotionally neglected by her mother" card to fall back on whenever she needs to convince herself.