yeah, it's definitely an oldschool stereotype rather than something that's still common nowadays, but around here it used to be specifically a silver ring on your right thumb, though i've heard black thumb rings were the stereotype in other places.

Maybe it's because it's late when I read this but
1. I don't understand what's going on
2. I sense tsun
3. Or maybe jealousy

Hime (short haired girl) doesn't like the other girl because she's smart and pretty and is friends with everyone else in the class but never talks to her.

The other girl actually has a crush on Hime and just hasn't spoken to her because she's really shy about it.

There's no real tsun or jealousy there - the other girl just seems shy/awkward, and Hime just disliked her because she thought she was being excluded/ignored by her or whatever. 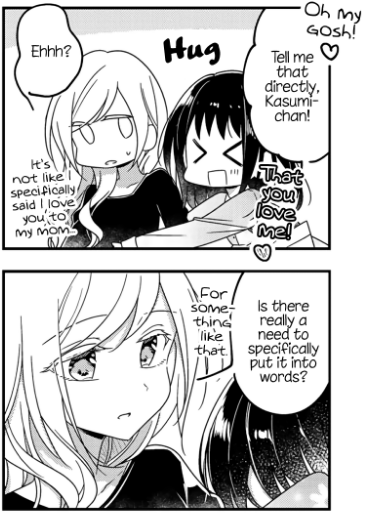 take all of my uwu's

Also, Minami is even younger than I thought. I figured she was out of school at least. Well, clearly she's out since she doesn't go anymore but you all know what I mean.

She said in the 2nd chapter that she's 18, and you can graduate high school at 17 depending on when your birthday is so she's technically of age to be 'out of school' anyway.

There was a 2 year time skip in chapter 4 of Tsumugi, maybe it's during that time that Kidaha gives Yuuri and Fana the necklaces, the events of the original Earth Girls happen, and they give the necklaces back. In fact that's the only possible explanation so I'm going with it. It also partially validates Mira's sketchy chronology comment: the last part of chapter 4 takes place 2 years after the original installment.

That makes sense. And Kidaha has an injured leg at the end of Chapter 4, the same as she has in the Chapter 7 of the original volume. So the timeline would go like:

That extra page is in Ch3, but in the very next chapter Kidaha is complaining about Yuuri and Faana leaving her and handing in their necklaces, so it's probably just an inconsistency that they were never given necklaces in Tsumugi.

KyuKyu
My Sister Found Out That I Draw Yuri Manga discussion 04 Apr 21:13
Quote

Soo i`m not the only one that thinks, it was a boy?

Miyu is a girl's name.

That hand that opens the door is all bandaged up in the same way as Shio's brother's...but I'm not sure how he'd have gotten inside, how a fairly young boy would impersonate an old woman, or how he'd know that Sato used to live with her aunt.

Oh wow somehow in my memory this was already completed, happy to be proven wrong!

There's the final chapter of Nicochuu and then a bonus chapter left at this point :)

I think this line basically sums up the whole series. 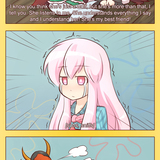 ^ The episode this is from aired 14 years ago. Whether or not you consider that 'old' or a long time ago depends on your own age :p

KyuKyu
Step Up To The Plate, Ladies discussion 17 Sep 16:40
Quote

I appreciate that this is one of those rare futa doujins where the plot isn't basically "Holy fuck, dicks are AMAZING!" But on the other hand the presence of the dick is a bit baffling as there's no real reason for Rin to have one in the first place. You could do the exact same scene without it, and nobody would realize. So...really, why bother?

Why does futa get scrutinized so heavily compared to other kinks, geez. You barely ever see comments like this on basically any other tag, yet every futa doujin I click on will have at least a couple of people asking why it wasn't just 'regular yuri' or whatever.

It might be a bit shocking to people on here, but there are authors who like to draw futa - some prefer to draw it over vanilla yuri or het, some just like to draw it alongside their other works. So they do. it's literally that simple. They liked the idea of a futa story with Maki and Rin (not a yuri one or a genderbent one or anything like that) so they drew it.

And people saying "hurr the author only picked rin cuz she looks like a guy!" are really reaching hard for something to criticize. Not only has Bocha drawn vanilla MakiRin before (so it's obvious they're just a fan of the pairing in general), but there's plenty of futa Love Live doujins about basically every girl and pairing, yet as soon as it's the tomboy it's suddenly a grave sin? (lol who am I kidding, futa itself is a grave sin to a lot of the more fanatical yuri fans anyway)

Like, just stop. It's a kink. It's a pretty damn popular kink in ero doujins. There's likely no deeper meaning to any of this besides the author finding a futa ver. of this particular pairing hot.

Also sorry if this got a bit heated, it's just been bubbling up for a while since it seems there's the same damn comments and criticisms (or outright bashing) on every futa piece -_-

So tattoo's are scary?

To some people, yes. There are a lot of very traditionalist social ideologies in eastern and western cultures that view tattoos as indicators and examples of dangerous or otherwise uncouth behavior.

The dark haired girl straight up looks like a JRPG villain when she's in her club outfit.

Two new Mira works within the same week, this is what heaven feels like~

If you're reading a h-doujin and expecting a substantial plot or realistic anatomy, you're probably not the author's target audience.

I thought it was fine tbh

KyuKyu
A World Without Freedom discussion 19 May 15:38
Quote

But it's a Yuri. Why make a man a protagonist on a Yuri manga.

There was one guy in this whole manga and he had like 4 lines of dialogue, what the fuck are you on about?

KyuKyu
A World Without Freedom discussion 13 May 18:38
Quote 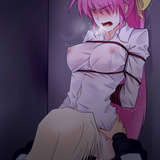 She's an antagonist from Force. She very nearly kills Signum in their first fight and Signum becomes a little obsessed with recovering and getting stronger in order to defeat her.

KyuKyu
A World Without Freedom discussion 08 May 20:44
Quote

So Meiko's domineering and controlling personality is just a front that she's using to hide away - her real personality is probably the same as it was pre-assault.

I'm guessing Reo seeing Meiko crying made her realise that being her 'slave' and obeying her every whim wasn't actually helping Meiko at all on an emotional/mental level, and was actually pretty self-destructive for both of them.

I don't know how many chapters this story has or if it's still being written or whatever. If it's short then Meiko will probably have a quick reality check. If it's longer then we'll probably get some more drama, maybe Meiko dating someone so she can throw it in Reo's face in a "They're a better friend to me than you ever were" guilt-tripping kind of way.

That is NOT the time you confess your feelings to your longtime friend!

It is if you want to confuse them, send their emotions even more out of whack than they already are, possibly cause a full break-up and then get them later after they're single :^)

I always enjoy this kind of story. I know Meiko is manipulative and really laying on the emotional abuse, but sometimes I get bored of how sugary-sweet and innocent so many characters are in yuri works.

Sometimes I just want to root for a 'bad girl' without them being clearly overshadowed by the couple that's 'meant' to win out in the end.

I was hoping this was gonna be yandere Umi T_T