Good stuff. Fumika is quite cool. The Fuso Sea Incident is mentioned all the time in the anime and other side material so I'm also pretty excited to see what it was all about. 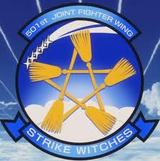 OMG! Someone is scanlating this!! THANK YOU!!!

Many thanks. I hope, you can translate this wonderful manga. I belive in you!

I cannot thank you enough! I've been looking everywhere!

:D thanks for the new chapter yuri project!

You're welcome. When you're reading this, do yourself a favor and make sure the reader isn't resizing it. The screentones look pretty bad otherwise because there are so many of them.

The images came out really good on my tablet :)

Haah...5 new girls to keep track of. Had to read the chapter twice, lol. Still, have to at least recognize Anabuki Tomoko, right? This was a pretty damned interesting chapter with a ton of technical detail as well.

I've got zero familiarity with army insignia or anything like that so for me that Lieutenant-type Katou Takeko and the actual Wing Commander Etou Toshiko look way too similar. Only difference is in their bangs, lol (jagged versus straight). Well, in the end their roles got differentiated pretty well. I'll look forward to getting to know all these characters.

Thanks to Phyis and Procyon for the new chapter! Still super excited that this is getting translated, and under the wing of Yuri Project, no less. 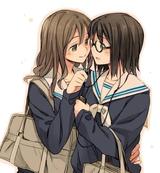 omg why did I not see this earlier. thank you so much<3

Omg I saw something totally unexpected on chapter 3: PANTS! Seriously, I never thought I would see any actual trousers in this series, yet here they are.

Omg I saw something totally unexpected on chapter 3: PANTS! Seriously, I never thought I would see any actual trousers in this series, yet here they are.

Finaly finished both volumes, it's a strange take on this series. If one was to describe these volumes as boring you would not be wrong, but in the least that slow build up works in the series favor of making the titular last battle have some weight. Unfortunately that still doesn't make the action any better, the artist here seems to be good at a lot of things, but portraying action is not one of them.
Odd choise to do a Strike Witches manga like a straight up war drama with lots of politics, war chronology and characters with so much angst. Can Strike Witches really work without a good balance of drama, action, levity and comedic pantieshots?
My answer is no, but there is still some interesting stuff here for die hard fans, worth one read atleast if you are craving for more of this series. I liked seeing illustrations of the 1st Airbone Divison a lot and Mio is super moe in this at times, her backstory was allright as well, made it seem like she has had a though road.

What I don't comprehend is the svereal pages of text at end of each volume describing in great detail various fantasy war equipment and vehicles, I don't know what level of war history enthusiast you have to be to enjoy that.