WollMilchWombat was given a clear choice, and decided to double down. So they're accordingly taking a month off.

Nya-chan, your comment was neither appropriate, accurate, or helpful. Please keep such things to yourself in future.

WollMilchWombat perhaps didn't argue it in the best way, but I think his point is fair about the use of the tag, it's misleading.

Nya-chan's comment was pretty understanding of the situation, I think it was meant to calm people down as this topic is not something people are gonna come to an agreement on. You saying that it was not accurate seems to indicate that it is not faith based, then if possible and if it isn't too much of a bother could I get a link to something that proves this a fact.

Seems like you are the problem here Nezchan, you're so deeply religious that you think it's okay to trick people with misleading tags and even bullying active members of the community to enforce your opinion. In my case I was discussing something I didn't like in this manga, but you made the discussion about me not conforming to gender politics.

As for the previous Ms.man comment of mine, I did say he deserved ridicule, you can't ridicule someone without being offensive in some way. If me calling a man for a man is baffling to you and makes me look bad, I'm totally fine with that. I hope you are also okay with making yourself look bad when it comes to this topic, as to me and other more normal people you probably look like a bizzaro person from another dimension. Previously you also called me "dude", that is inferring my gender, you lost at you own game.

In short: You can like what you like(to your own benefit or detriment of coure), but don't trick people and don't force people to like the same thing. I don't like gender politics, so don't force me to play your game.

(For onlookers: I don't hate Nezchan, far from it, I just think this one particular case wasn't handled in the best way.)

I do like ships, tough girls and comedy, I guess I'll give this a chance.

Around Chapter 5: Yup, I'm loving it so far and OMG that bullet sword block, maybe she really could cut battleships in half. Nina is cute nazigirl, that submarine trivia tho lol, surprised I haven't seen the submarine girls in KanColle suffer such jokes.

Chapter 8 page 156: WOW, guess it realy is true that Obama's favorite anime is that one, you know the one I'm talking about.

Chapter 10: What dearing swimwear for the period, but maybe that should be expacted from an official nazi bikini. A jew in my manga lol, that might be the first one I have ever seen and she's so cute!

Oh geez, too sweet, this author is the best.

What a delightful collection of black haired girls, surprisingly addicting series. (Get on this Doga Kobo!)

More from this author, lovely! 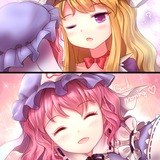 ^She sure didn't, neither did I. 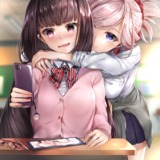 As if the Fate series wasn't confusing enough without alternate realitys, cute pic tho.

That chapter where all 4 meet up at the festival, that was so awkward it was awesome, just splendid.

In honor of this tag, here is a scene from Inu x Boku SS, who some might know have a few good moments.

UmiNico movie date?!! I almost fell off my seat, it was wonderful too, the world needs more UmiNico.

Is that really a toy knife or actually a switch blade?! :O

That first warning page tho, but it was mostly correct, I almost wonder if the ecchi tag was part of the joke.

That was excellent, such a cute tsun Murasa and childish Ichirin, loved their transition in the story. It's like they had opposing develompents, Ichirin becoming more mature so to speak and Murasa becoming more free sprited.

That was almost a really nice book, the middle part didn't seem quite in tone with the rest of the book. I loved the art tho, Tenshi has never looked so cute.

Seems it's not as easy as cutting out the middle part, what's happening after that point lol. Why is Reimu acting like a lunatic. Well it seems from the note of the author he was afriad that this doujin had too much talking and not enough action, so he was probably trying to spice things up, even though it was unnecessary as the dialogue was strong enough to carry this.

On page 21, is that the aftermath of Tenhsi and Reimu having casual sex? Partly page 21 and 22 is essentialy pillow talk, altough it's frontporch talk, what a shameless miko.

Here is my "Cohesive Flow" fanedit of sort for curious persons: https://mega.nz/#!wFwThIxQ!0oA5Qj6NEgvmcdnX-sft2L0IA5terJFDFUKxJpRWltk
It was a little bit more work then I thought it would be, but it was a fun little project. 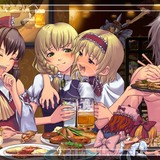 Came in for the cute sillyness and OMG WTF is that on the right?!! O_O Well played... 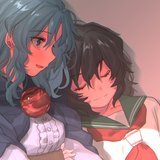 It's hard to get the right lighting on youkai^

Yuki-senpai is too much to handle for our girls.

The translation for the last chapter feels way different from the anime, not even sure what the last joke was, dog? WOW? what? Well anyway, stil funny, please bring us more.

Aya and Rize aren't that similar personaility vice are they? :P well maybe both can get flustered at times.

Kill me Baby also made a small crossover hehe, I love Yuuki Sonisuke's crossworks, thanks you /u/

This is caught up on Danbooru, for those that want to see what happens next. It's a doozy.

Thank you very much!

That's exactly what I was fishing for, thanks for sharing. The IJN ships do have some nice quality to them, I'm not that well verced on the subject to say what exactly, but they sometimes look kinda cheaply made yet classy. I think Soviet Navy ships looked pretty badass, they have this big sturdy intimidating aesthetic, not sure who my favorite is yet.
I should get back to reading more of the Fubuki 4koma, it's a fun series, probably better spent time too then playing the game lol...

You mentioned the forbidden chapter again, double the punishment game for you!

Maybe I'm going too dark in my interpretation of this, but the environment is always ominous and hellish so maybe that is the point. If you have read any stories about what happens to children when they are kidnaped and turned into "prostitutes", you might agree with me that it seems like the overarching "story" of this series seems to go through those steps.

To summarize the main thing that happens in each chapter:
Ch1 deals with Tengu that are known for their kidnappings, this is even stated in this chapter.
Ch2 they are literally in the world of prostitution, the older girl is mentoring so to speak.
Ch3 she is now being used to recruit another child, the "little sister" character in this case.
Ch4 she ends up taking over the job for two other girls, who are also "sisters".

Becoming a catgirl is then probably symbolic of her being changed by her kidnapers, as this is shown to be something someone is doing to her, the "robot hands". There is probably a lot of other smaller details to go into.

I don't know what this manga is trying to say, it doesn't really seem to portray this evil act as something beautiful, as everywhere she goes things look horrifying, but why base a manga around this theme in such a cryptic way I don't know. It also a bad ending, is it trying to say that without "child to adult" prostitution rings society won't function, as symbolized with the train system that she eventually becomes an important part of. If I'm onto something here that sure puts this author in a wicked light. (Alternatively maybe the train system is just symbolic of the sex trafficking system itself, that she becomes a part of.)

I kinda hope I'm totally wrong, but it seems to fit in a lot of ways.

She really is, ponytail was great too, Naka's commentary was also great, idol unit form!

The chapter that should not be mentioned, the punishment game for you!

Oh BTW, judging from your Gakkou Gurashi!(School Live!) comment you must be a big KanColle fan, may I ask who your favorite ships are?(interpret that as you want)

It's obvious why Saki intervened, Kanaka's little brother is hers! I didn't know Youkon had a big sister, she looks kinda wierd, but then I was introduced to her as a stalker.

Hazukish
I Am Custom Made discussion 06 Jan 17:31
Quote