I feel like this keeps getting more and more interesting :0

Can i ask what the repercussions are?

Very cute and wholesome, when theyre both old enough i hope it blooms into a proper relationship :))

I reread this and all i can say is that this author knows exactly how to do a perfect ending.

The weird thing is I loved loli's when I was a loli myself....

Theres a thing called Autopedophillia where people fantasize about being the child in and adult-child relationship. Honestly i dont find it that weird, as long as no actual children are involved, no grooming is involved onto a teen or child, and everything is consensual, then anyone can do whatever the fuck they want.

Now now, boys and girls, hold your noses, the bleeding will begin soon.

But seriously all this build-up, there better be some smooching..

Honestly i love this domme sub dynamic they have so..

this is gonna get gay.

Will this be updated at some point?

If anyone worried of aaangsty stuff don't worry. Chapter 1-2 is literally the most aangsty part of the series.

For anyone too lazy to download or read the txt files or something, here's the summary:

chapter 3: Ayu confess to Hi (continuation from ch2). The next day, Hi replies that she should've confess faster and Hi has someone else that understands her (sensei), basically Hi rejects Ayu but in a nice way (the 'I appreciate your feelings but I already have someone else' kind of rejection). Later Ayu noticed Hi seeing sensei with her boyfriend but remain unfazed. Afterwards Ayu overhears sensei is getting married and confronts her, mentioning that she realized Hi was dating sensei while fully aware of sensei having a boyfriend. Ayu asked why sensei is going out with Hi in the first place and sensei revealed it's because Hi reminded of her old self. Sensei revealed back when she was a student she had a lesbian relationship with her friend but that friend pushed her away as her classmates found out and called them gross. Sensei saw Hi is in a somewhat similar situation and also Hi looked cute at the moment. Ayu then asked why does she getting married with her parents arranged fiancee if she truly loves Hi but sensei said that the fiancee is someone she chose on her own and that she's an adult and must do stuff like fulfill her parents expectation and stuff. Ayu then makes sure sensei is going to explain it all to Hi and the conversation ends with Ayu and sensei being on good terms (it's worth noting that by the time Ayu confronts sensei, it's implied that she has already accepted that her feelings is unrecruited and is not trying to resolve Hi's relationship so they can be together, she's purely worried of Hi getting hurt). The chapter ends with Hi herself overhearring sensei's marriage

chapter 4: Ayu confronts Hi about sensei's marriage and how Hi seems to not care. Hi stated that she's fine and she and sensei could never be together. Ayu said Hi is running away but Hi rebuttals saying Ayu herself pushed Hi away from her feelings. Ayu then asked her other friend Inui for advice and Inui said she should just express her feelings without hesitation. Ayu confronts Hi again. Hi still tries to make excuses but then Ayu slapped her and told her she shouldn't pretended that her feelings for sensei never existed and convinces her to ditch school and go to sensei's wedding (the wedding is held on school period). Hi meets sensei and resolves her feeling, thanking her for everything. As they left Ayu was saying how she was right that meeting with sensei was a good idea when Hi suddenly hugs her, thanking her and asking her not to push her away again. Ayu responds with that she won't push Hi away even if Hi told her to. The next page Ayu and Hi walked to school together and Ayu noticed ever since that day Hi seems to smile more brightly, and then Hi offered her hand. The story ends with them going to school holding hands.

chapter 5: Chapter 5 or 4.5 is basically the epilogue of the characters about 9 years into the future. Inui became a kindergarten teacher which sensei's daughter went to. Sensei as already mentioned have a daughter. Sensei then skype calls Ayu (revealing they kept in touch) and after some chit-chat Ayu reveals to sensei that Hi (who've been hiding her face) that Hi cuts her hair short. Sensei's daughter immediately falls in love to Hi and confess her love but Hi reveals to her that she and Ayu is married, much to Ayu's embarrassment and sensei's daughter dismay as she starts screaming that she's been heartbroken, to which sensei ended the skype call. Ayu the revealed they moved to a part of the country that accepts lesbian marriage and wed, and it ends with the typical cliche they both mentioning their journey together how they known eachother since young and stay together even through bickering and stuff etc etc (you know, the typical romance ending dialogue). There's also some typical character profile in the end.

My opinion: As many who've already read it mentioned, I felt that Ayu and Hi's reconcillation at the end is a bit too short (though the bonus chapter 5 makes up for it) but otherwise pretty good story.

Downloaded the raws and followed along. A bit draining but actually worth the read and the end made me really happy, just wish theyd been more development to their relationship before they got married

Damn 13 comments pages, and I'm too late to take part into the shitstorm.

Anyways the only question I always had when it comes to lolicon is why everyone who likes it is automatically considered a pedophile, I mean I get why people would make a correlation but we're talking about anime characters, not a realistic representation of real life people, I think people may have their own reasons to like it rather than "is CP that doesn't gets you in jail" like many people seems to think.

And what if someone is into lolicon / shotacon but is disgusted by the idea of watching actual CP or trying anything with an actual kid, why would that person be a pedophile? This also reminds me a lot to when furries were often accused of being into zoophilia, like if a drawed anthropomorphic representation of an animal were the same thing as an actual real life animal.

I think obviously Loli is somewhat related to CP, but its more like...? being attracted to the idea of the victim/master and height difference and power play that CP is known for without scarring a childs life. People are disgusted w real cp bc it involves a real person who is being raped. Whereas Loli is like the roleplay version of that. Similarly people have rape fantasies and will roleplay them with their partners but im 100% sure they arent actually suggesting they want to be raped. ( in my opinion )

ImGayO-Kay
A Secret Just Between You and Me discussion 01 May 14:26
Quote

Yeah agreed. Chii rubs me the wrong way at times.

A large part of it is that Haru is just so submissive. I would feel a lot better if she had some level of confidence and self-determination in the relationship. I get it, Haru is the demure maiden to be swept off her feet by Chii's domineering advances. But seeing Haru give at least a little push back with Chii responding in some way that acknowledges Haru's agency would make me more comfortable with their relationship.

personally it doesnt rub me the wrong way as we know they are attracted to each other and I believe they have a mutual understanding about it. Also im a massive sub so i would act the same, its a little tough to "push back" if thats uncomfortable or if you enjoy the dominant actions ect.

ImGayO-Kay
The Rain and the Other Side of You discussion 12 Jan 04:58
Quote

Did the art take a sudden dive, what happened?

I was wondering the same. Did someone get impatient of waiting and just made some of their own? Looks nothing like the first 19 chapters???

The artist seems to be ill, look at the last page "Somehow there's stars whenever i look around.... Am i going to suddenly die?"

Woah Im stunned. Kinda worried im so invested in this.

I don't know I don't like the director. Make one of your actors fall in love with her partner then steal said partner away from her only to show that actress how to put more emotions into your play? That's plain cruel

Really is, I've read this twice now, and this second time I actually realised that she herself told them to go there, really makes me dislike her and yet still like her...because there was some good intention?

I don't think she died. Most yuri manga end like that so I can see how we're trained to think any ambiguous ending means one of the characters is dead. I think it's about growing up, saying goodbye to their pasts.

OKAY I MAY BE OBSESSED. 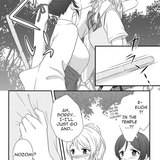 I have a far fetched/no so much theory, I feel like, maybe it could be a "The teacher is interesting shes okay that Im gay" and a "Dont kiss me if its only a friend thing" Maybe...I'd love it to be. Also dont read this while on your period.

WHERE IS ANGST? THIS WAS ANGST RIGHT? MY HEART