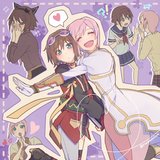 @W rock
The vibe I got mid-game made me low-key think Velceanor was going to be canon... Or at least as close to canon as Ristelle is.

@Looking East
I was, but I had to stop. (Mainly due to real life issues, but the "warm reception" I got certainly didn't help my motivation to continue, lol)

In Japan, it's not so much for intelligibility (though it is in some cases, since some dialects approach "different language" levels) as it is just a cultural thing. In formal contexts, it is simply proper to speak standard/Tokyo Japanese (even in other regions). Not doing so can make you seem disrespectful, or that you're not taking the situation seriously.

For a modern, international comparison, take how many American politicians speak with a southern accent. That would simply not fly in Japan, as it would give the impression that they don't take their job seriously, whereas in the US and many other places, it is simply a regional dialect (although stereotypes may of course apply).

Fun fact: In older times, the formal version of the Kansai dialect was frequently used by prostitutes and geisha, as it sounded "high class" and "sexy". Incidentally, prostitutes weren't viewed as "whores" in any derogatory sense; they were viewed as women of culture and beauty, whereas the "common woman" was simply there to make kids and take care of the home. :p

are accents frowned apon in Japaneses companies, or is it just that its hard to understand them?

It's considered impolite not to speak standard Japanese in formal/business contexts.

Glad to see it being worked on again after I had to stop. :p

I personally think Hime and Yukka are a better match for each other. The (very) heated and confused Hime, combined with the coolheaded and rational Yukka. On the other hand, I think the timid and shy Akira might pair well with the outgoing and ditzy yet very kind Taneno pretty well.

@TransHomura
Queer sexualities are definitely more common among trans-people compared to cis (which I find pretty interesting), but straight trans-people do definitely exist. I know a few. x)

One of my favourite novel series finally getting some love! :D
Can't wait for the queen of weirdness, Yashiro, to show up!

@Nya-chan
I agree that I wish LGBT was at the same level as say, haircolour, but unfortunately, in order to become normalised, something must first become visible. The black civil rights movements of the past being a good example, and even there, one can argue that skin colour/race is still far from normalised, except superficially/in the legal sense. I suspect that LGBT will likely face a similarly drawn out struggle, especially in very conservative parts of the world. :/

Ropponmatsu
Best to worst yuri author that you've ever seen in your yuri's way. 17 Mar 16:00
Quote

Hitoma Iruma - Specifically for the Adachi to Shimamura book series (since the topic isn't just manga), which I can't recommend enough to any yuri fan who can read Japanese (it hasn't been translated).

But it had? At least the two first chapters, we'll get more in the future!

I meant the books, because they're way better than the manga, but fortunately it seems the books are being translated too, which is great news! 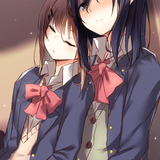 I'd love to send upload requests for all the cute pictures from the LNs, but they'd be full of spoilers. >x<

The novel series is among of my favourite books. The characters are wonderful, funny, relatable, and extremely lovable. While the manga unfortunately can't hold a candle to the books, it's still very enjoyable and cute. My biggest gripe with the manga is the less introspective nature of the narrative, and the lackluster portrayal of the character Yashiro, who is plain out of this world in the novels, and that strangely doesn't translate very well in the manga.

The fact that the novels are finally getting translated is amazing. I can't wait for more people to experience them!

Yup. Especially the first episodes were really annoying for that. It was basically trans advocacy over and over, and no one is interested in that. Supporting trans rights works by writing good trans stories, not trying super hard to be an ally and write something meh. (that will have the exact opposite impact)

I think that part of the reason for this is that in a really conservative environment, with an audience that may not be familiar with, or even feel awkward about the subject of LGBT, you may just have to shout that much louder that "this is okay!", to get the point across to the reader. Granted, Japanese media does have a very strong tendency to tell rather than to show, with exposition dumps being the norm in Japanese media. I think these two factors combine to make it come off as preachy and exaggerated to us familiar with such questions.

Sometimes we have to remember that — unfortunately — these stories are usually written in a society where "everyone has the right to be who they want to be" and "everyone has equal value" is not obvious or common sense.

@Sylke
From what I know (having read ahead in the raws), Akira isn't transitioning **yet**. She has only just started wearing women's clothes as a first step. I think that's important to remember when discussing her passing or not.

Ropponmatsu
Best to worst yuri author that you've ever seen in your yuri's way. 14 Mar 19:39
Quote

Best:
These two are the first I thought of, because of their amazing writing skills.
Kishi Torajirou - While the irony of a straight (?), married, middle-aged man being my favourite yuri manga author isn't lost on me, I think he's just a step above the rest. He manages to create a sense of realism in a way that (usually) isn't grim or depressing, and also writes extremely natural-sounding dialogue, though I imagine the dialogue could come off as awkward if it's your first time reading something by him (unsure of how the English translations of his works are regarding this, as I read them in Japanese).
Hitoma Iruma - Specifically for the Adachi to Shimamura book series (since the topic isn't just manga), which I can't recommend enough to any yuri fan who can read Japanese (it hasn't been translated). While actual romance is on the lighter side, the series is packed to the brim with emotions and fun and interesting characters.

Worst:
I find this harder to narrow down, since I generally just don't read stuff I don't like. Still...
Kodama Naoko - She's very much found her niche, which just happens to be a niche I really, really don't like.
Shimura Takako - I just don't enjoy her storytelling. At all. Aoi Hana/Sweet Blue Flowers was an incredibly unsatisfying read to me. "Realistic" doesn't necessarily mean enjoyable, after all.

@LilLegalLoli94
Considering Gin was the one getting low-key sexually harassed, I don't think he has to be open about anything tbh. :/

There should be some sort of warning for the last part with his hard-on and all that, but there's no "erection" tag or just simply a "dicks" tag.

There's an NSFW tag, and MC is (as far as we know) a crossdressing man, yo. :p

@Symphogeah
She does explicitly say boyfriend (彼氏) in the raws, yes.

"This isn't cosplay".. so she's a boy? The tittle seems to hint it since she refers herself as "Boku".

Reading the raws, none of the (so far 4) important characters refer to themselves as "boku" — they all use "watashi" (e.g. Akira) or "atashi" — so I'm not sure who the "I" is in the title.

@JazzLafayette
Fukakai na Boku no Subete o also does a surprisingly good job at showing "non-standard" sexualities and gender identities in an empathic and respectful manner, in my opinion. It's more story and less education than this one, but I really like it. (And I don't think it deserves the "moe/fetish fuel trash" label some people in its own discussion gives it.)

It's a shame that it's so unusual though, as in my opinion, realistic introspectives and stories about sexuality and/or gender are very interesting regardless of your own orientation or identity, providing you have an open mind, of course. 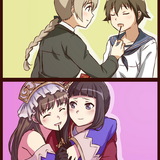 Ristelle!! I can't wish enough for the recent re-release to reignite fanart of one of my favourite ships, from my favourite game of all time.

@Clueless1
That's like saying you prefer the term "apple" rather than "fruit"... :/

Wow, do they actually teach LGBT topics at school in Japan or was that kind of set up a bit of artist fantasy? I sure could have used that lesson here in the states when I was like 10 years old. Would have made my life a hell of a lot less awkward going forward.

As far as I know, it's similar to how it is in some states in the US and some other places, i.e. "there are some weird people who're snowflakes and choose to be different. Now, let's talk about why Jesus hates them [or whatever other rigid conservative viewpoint the school adheres to]!". I don't believe it is very in-depth. Hell, it wasn't even in-depth where I live, which is allegedly one of the most progressive countries in the world. Strong emphasis on "allegedly" there... =_=

To me, this feels kind of like an educational work, more than a story, and I'm thinking that might be exactly the purpose the author wrote this for. While it is a self-contained story, it focuses heavily on introducing these concepts — which are no doubt foreign to a lot of people, especially in a rather conservative society like Japan — explaining what they mean, and that they're important.

While I didn't particularly enjoy the story, as I'm generally more for happy fluff stuff, I think it did the above really well. Having two characters, one who's "aggro", and one who's timid, also helps, I think, as it shows that non-acceptance (and to a lesser extent ignorance) can be and often is hurtful, but that people react in different ways (which of course also applies to many other situations as well).

All in all, a pleasant surprise to see something so open-minded and well-educated on LGBT come out of Japan (as even LGBT authors are often guilty of generalising and/or leaning on tropes). 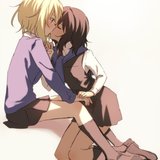