Cannibal
It Would Be Great if You Didn't Exist discussion 05 Jan 22:55
Quote

Because for tagging purposes, nothing to warrant the tag has happened yet. Alice of Office Romance Division was a (informed) man hunter, but that doesn't have the tag, because it doesn't warrant it.

Edit: I guess it does according to the admins lol

If the bisexual girl is actually shown doing anything with guys then it's usually tagged with Het. Bisexual is usually just used as a warning for the people triggered by anything not pure yuri that one or more of the girl's is into guys, no matter if it's shown in the manga or not.

So Shinmai Shimai no Futari Gohan being displayed in the Yuri section of the bookstore wasn't a mistake...

Also, sadly they name some works that are must reads that haven't been translated yet, can't wait.

I think it's the opposite, how depressing would it be if we had already read all their recommended new titles?

My fear is that they will never be translated. One of the mangas they mentioned, Asahinagu, they said yuri fans should check out for some good pay off in volume 16 but the only translations so far only go up to chapter 3. If I start now I can probably teach myself Japanese before any scanlation group picks up the series.

This counter-argument is only as valid as the assumption it is based in that Shiro engaged in a logical reasoning process in that scene. To me, it is quite obvious that she did not.

Well, the initial argument relies on the assumption that Shiro believed that Kuro would run out of power and die when chasing her. An invalid argument doesn't need the counter-argument to be valid.

Aaaand I bestow upon Shiro the title of "dumbest girls of the month", good idea to run away when the artificial heart of your beloved is running out of battery. Chasing Shiro wasn't very bright from Kuro either.

Would be a pretty good piece of criticism if they didn't show that she had an extra battery on her. Shiro probably thought that Kuro would have at least stopped to change her battery and use it to escape the situation, didn't account for Kuro to risk her life to find the truth.

So Shinmai Shimai no Futari Gohan being displayed in the Yuri section of the bookstore wasn't a mistake...

Also, sadly they name some works that are must reads that haven't been translated yet, can't wait.

Cannibal
Tracer Confirmed To Have A Girlfriend In Overwatch 'Reflections' 04 Jan 14:55
Quote

If you own a PS4 give The Last of Us a try and make sure to play the DLC. 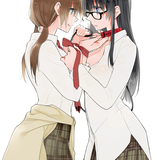 ^ You have the gender on the pronouns mixed up, it's "her dog" and "her slave".

Mmm, I think quite a few of the girls seem like they're in more of a "just a stage", sexual exploration sort of relationships. Like, even the other characters seem to draw a distinction between what most of them have and then what Ai and Chie have.

I gotta to disagree with that. Yamada and Asami were in an actual relationship, Yamada became severely depressed after it was over, and now Asami and Mio are dating. Mari and Yuu are in a full BDSM filled relationship, and if I'm remembering correctly Mari has told Yuu that she loves her. Airi and Michiru seem to be dating, Michiru stating that she loves the female body and giving kisses as rewards. Ayano has a clear crush on Miyoshi. Nononon has a clear crush on Yumimi. Hibiki is in the early stages of crushing on Midori after being tossed aside by Yamada, and she has already dated boys. The sexual exploration themes seem to be centered around Nao and Onoda. [RAW SPOILER] And from what I can tell Onoda is going to get a crush of her own

I know what you mean, and you might be right. But if it was the case that they're clearly supposed to be a couple, why would the author go to such pains not to depict any scenes that would remove the ambiguity, despite them being absurdly close?

Well we have seen them kiss, know that they kiss even more when not at school, and say that they love each other more than anyone else. Put that in context with the rest of the manga filled with gay girls and you are left with very little, if any, ambiguity.

Just saw an instagram video of a straight classmate from high school kissing her friend in exactly that fashion at the new years countdown. As much as I want more romance to be present in this series, you can't make any rash assumptions

Well, uh, considering the rest of the manga it's really not that rash of an assumption. 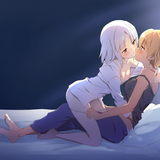 It's real subverted, revealed in an eyecatch. 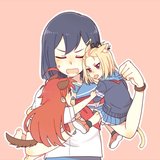 Yeah, director confirmed that the yuri between Papika and Cocona is 100% intentional.

The fact they threw in this canon couple makes up for all the possible shortcomings of Brave Witches.

"Not at school" oooh so they will at home? Maybe they're not as innocent as we thought !

There was a chapter of them kissing already. No subtext there between those two.

Which? I don't recall that.

i hope this doesn't turn into yuri. even if they're adopted, they're still sisters.

Citrus, one of the most famous Yuri mangas getting an anime this year, begs to differ.

"Not at school" oooh so they will at home? Maybe they're not as innocent as we thought !

There was a chapter of them kissing already. No subtext there between those two.

Lets get that status changed to Ongoing!

Halfway through ch 12 and was so god damn confused until I closed full screen and saw the page ordering.

Washio is a beta, Kotooka's an asshole, Kyousuke is boring, and Subaru is a psychopath who is going to murder Tsukasa and wear her skin at some point in the near future.

You can't even be sure, we don't know either how they will end nor the way their anime adaptation will. So I wouldn't be surprised to see troll ends for these two, and given the original material, it wouldn't bother me at all. All we can do is wait for a decent yuri to be turned into an anime, and creating a larger yuri fanbase shall be the role of Citrus and NTR.

I don't understand how Citrus could get a troll ending. They start dating in chapter 16, the studio would have to throw in a ton of filler if they want to end the series before then.

So they were actually made canon huh, wish more producers would grow a pair of balls ;o

this is actually canon?

Yes, at the series panel for Animagic 2014, producer George Wada confirmed that Ymir and Krista are a couple.

OR dude wanted to date the the older sister but was shot down, now wants to meet and date the younger sister only for Yuu to step in and tell him to step the fuck back from her woman. Happy end :D

Cannibal
Yet another "whats the name of this manga" 30 Dec 06:21
Quote

I guess some things will just have to remain a mystery so that people have some things to continue to speculate about. Personally I'm hoping for short OVAs to fill in the blanks, but I'm not holding my breath.