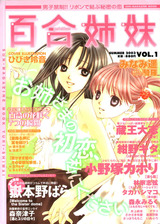 A magazine full of yuri manga, with some text stories and articles as well. Most of the stories are about school-age girls.
"Under the Rose," by Konno Kita, is a love story between two sisters who meet years after their birth.
"Her," by Zaou Taishi, is about two friends who are in love with each other but oblivious to each other's feelings.
"Even if We're not Friends," by Morinaga Milk, is about two girls who were friends in junior high but end up going to different high schools. This story is continued in Yuri Hime 2 (not to be confused with Yuri Shimai 2).
"Strawberry Shake," by Hayashiya Shizuru, is a bit different from the others in this anthology in that it's about idols. A more experienced idol has to train the new girl, but will they end up being rivals? This story is also continued in later issues of Yuri Shimai, unlike the others.
"Pure Shadow," by Onozucca Kahori, is a darker story about two girls who consider double suicide together.
In Inoue Shinkai's "Pops," a girl exploits her broken leg to get some extra care from her friend. There is a sequel to this, "Pops 2nd," in Yuri Shimai 3.
"Natsu no Mayu," by Takahashi Mako, is about a girl who admires her friend. Also deals with coming-of-age issues a bit.
"Kamuko," by Inuburo, is a funny, weird, short full-color story.
Sakazaki Sakura's "Little Birds of Paradise," like "Kamuko," is a short full-color story. Two girls discuss their plans for after graduation. Bittersweet.
"Melancholy of a Selfish Princess" is a text story by Satsuki Miyu with full-color illustrations by Aruma Jirou. A girl has a crush on her best friend, who calls her every night. However, one night she's late calling because she's been on the phone with a boy...
"Koi Shimai 1" is a short, sweet text story about a runaway ribbon; the story is by Ikemoto Akinaru and the illustrations are by Hibiki Reine. This story was later turned into a drama CD and a manga (the manga begins in Yuri Shimai 4).