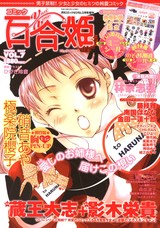 Issue 7 of Yuri Hime magazine. Many of the same mangaka return.
In chapter 10 of Hayashiya Shizuru's Strawberry Shake Sweet, Mutsuki helps Ran realize something about her feelings, and has a revelation of her own in the process.
Chapter 3 of Fujieda Miyabi's Chatting at the Amber Teahouse depicts Seriho and Sarasa's first meeting.
The sixth installment of Morishima Akiko's YurixYuri Observation Diary is about wrestling.
In "Winter-Tinged Thoughts," by Otsu Hiyori, Shizuru is in love with Matsuri, who in turn is in love with Aya. Oh, dear.
Hakamada Mera's "Giraffes' Necks Are Too Long" is about a girl who always blurts out what she's thinking.
In the third part of Zaou Taishi and Eiki Eiki's "Little Red Riding Hood Strikes Back," Natsuki and Fuyuka clear things up. (Though this is the final part of "Little Red Riding Hood Strikes Back," there's still one more story left in the book, plus a doujinshi by the creators.)
In "Stuffed Animals' Insides," by Takahashi Mako, a girl sees a friend (who also happens to be her crush) changing herself to attract the attention of a boy.
In chapter 4 of Nangoku Banana's Heart-Pounding Excitement at Mononoke Girls' Academy, Arare and Pero run from their angry classmates and stumble across a youkai who's part cow, part woman.
In Kindaichi Renjuurou's "Mermaid Line: Ayumi and Aika 1," Ayumi's boyfriend makes an announcement, but not the one she was hoping for.
Chi-Ran's "Planet Aimer-lis" is about an alien who comes to Earth in search of a bride.
In chapter 9 of First Love Sisters, by Shinonome Mizuo and others, Chika struggles to find a lost item.
In Natsuneko's "Spicy Sweets," a girl is worried because her rather unusual family is coming to see her.