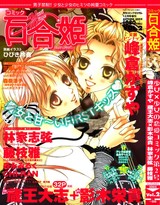 Issue 2 of Yuri Hime magazine. Many of the same mangaka return.

In "Tiger Lily," by Takahashi Mako, an old woman remembers the past. A helpful bit of information: the two main characters are drawn as their younger selves even in the scenes that take place in the present.
In Part B of "First Kiss," by Zaou Taishi and Eiki Eiki, Reiko contemplates both marriage and her feelings for Ayano. (See the Yuri Shimai 5 page for Part A).
In the fourth chapter of Fujieda Miyabi's "The Miko's Words and the Witch's Incantations," we discover that Tsumugi is having problems with her health.
"If I Kiss Her Ring Finger," by Morinaga Milk, is the sequel to "Even if We're Not Friends" (from the first issue of Yuri Shimai). Nana wants to take things farther with Hitomi, but Hitomi doesn't seem interested. Meanwhile, Nana's failed her midterms, and she uses the make-up tests as an excuse to avoid Hitomi.
"A Love Song in a Nameless Country," by Hakamada Mera (artist of The Last Uniform), is a love story about a princess and a ninja.
In Chi-Ran's "Her Temptation," the main character tries to--you guessed it!--resist temptation.
In the second chapter of Minakata Sunao's fluffy gag manga Nanami and Misuzu, the girls meet a new friend.
"Rapunzel," by Ruri Hozuki and Sakura Shio, is a yuri version of the fairy tale Rapunzel. It's an illustrated story rather than a manga.
The second installment of Morishima Akiko's YurixYuri Observation Diary is a report on the First Love Sisters drama CD recording. (The first installment can be found in ALC Publishing's Yuri Monogatari 3.)
In chapter 7 of Hayashiya Shizuru's "Strawberry Shake Sweet," we discover the identity of Ran's stalker.
"The One Adabana in the World," by Muttri Moony, is a fantasy story about smoke creatures that take on human form.