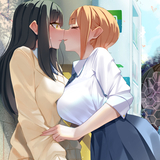 @DY4Y fr, and I don't like how they sexualize the orange haired one sooooo much, there's A LOT of fan service in the anime like kakegurui type shit (and ik even tho i don't watch it lmfao)

uwauwauwauwauwa
The Two of Them Are Pretty Much Like This discussion 12 Dec 19:42
Quote

Man kpop/jpop is so creepy istg, the idols is getting younger and younger, I saw someone that's literally like 12/13/14 yo. LEAVE THE CHILDREN ALONE
ಠ益ಠ

and funny how everyone is saying that people should be happy cos it's gonna be longer and stuff, bro I'm here for the plot (and smut ofcourse) and y'all r bitching about people getting mad about the author baiting us lol, ofcourse we're gonna get mad wtf do u expect (눈‸눈) and it's so obvious how y'all r just here for the fucking and not the plot ಠ益ಠ

damn main couple is slower than my brain
┐(‘～`;)┌ anyways i don't think asumi is gonna end up with someone here. (lmfaoooo funny how i literally told someone they're so impatient with the story yet here I am ( ≧Д≦))

and I love how people in the comments r typing essays in here, cool (⌐■-■)

damn y'all r impatient asf, we're just at chapter 12 (^～^;)ゞit's not even THAT SLOW y'all just want them to have sex that bad (˘･_･˘) and maybe it's because the mangaka doesn't upload that fast (?)

uwauwauwauwauwa
A Senpai Who Can’t Stand Manga Where the Girl Is Considered More Attractive After Changing Her Appearance discussion 07 Dec 19:37
Quote

uwauwauwauwauwa
A Senpai Who Can’t Stand Manga Where the Girl Is Considered More Attractive After Changing Her Appearance discussion 07 Dec 19:35
Quote

damn people who wear glasses just wants to see clearly yk ಠ益ಠ and i agree with her.

I love this (´;︵;`) and it's so tiring how mangaka's put unnecessary stuffs like stuffs in kakegurui or mieruko-chan and some other ecchi stuff. And how they think that if a girl gets sexually harassed they're gonna get all flustered and shy ¯_ಠ_ಠ_/¯ and don't even get me started by how literal middle school girls/CHILDREN is sooooooo sexualized in social media.

And they became the side yuri couple which is mor einteresting than the main couple. Lol

Anyone else has heard that this author is married to the "Komi can't communicate" one?

Ooo the dramaa. Also so confused about the fashion designer and model like does she like her???

damn i thought akari was just being in denial... guess not lol

Rin is 100% to blame here and I have no idea how people think Momoka is the problem.

The circumstance at the start is that Momoka dates and flirts with a lot of people.

Then Momoka tells her directly what actions Rin would need to do if she wants those circumstances to change.

Then Rin agrees with those actions.

Then Rin realizes she has issues with those actions and imposes additional rules on Momoka.

Then Momoka agrees with those additional rules as long as Rin keeps up her part of the deal.

Then Rin breaks her deal yet again.

Then Momoka gets understandably pissed and tells her not to contact her again.

And now you want to tell me that Momoka is to blame somehow?

I mean of course both of these girls have massive issues and both need a therapist in an ideal world, but morally, Momoka's only offence was getting jealous over Rin, while Rin has imposed her values on Momoka, then refuses to uphold her obligations and takes her for granted and leads her on.

how is Rin the only one getting the blame????????????
+momoka was the one who said that they should date
+HOW THE FUCK DID RIN TAKE MOMOKA FOR GRANTED. MOMOKA WAS THE ONE WHO TAKED RIN FOR GRANTED.
+ Rin never said that she likes momoka, she didn't lead her on
+momoka was clearly aware that Rin doesn't want to have sex and Rin has every right to say no. I DON'T GIVE A SHIT IF YOU'RE IN A RELATIONSHIP WITH SOMEONE FOR 50 YEARS IF YOU DON'T WANT TO HAVE SEX THEN IT'S A NO. (she fucking dragged Rin's ass in the hotel and didn't listen to what rin is saying)
-momoka is very possessive even if it was just Rin's friends (she tripped her and she snatched her hair and ofcourse Rin is gonna get angry at that you fucking bitch)
+Rin's rules about the relationships is the bare minimum and momoka has the right to decline those things.
You fucking incel.

uwauwauwauwauwa
I Went to a Lesbian Brothel and My Teacher Was There discussion 03 Dec 18:50
Quote

this is how I feel after a long and arduous day of trying to enjoy mainstream media and its excessive heteronormativity.
thanks dynasty scans dot com for always being a reliable refuel point

The twist threw me for a loop, but damn, grandma is great. Best yuri manga grandma I've seen in a long time, lol

But that aside, that last page. The panels seemed to hint at something in the general vicinity of drama coming up soon. The panel with the "house to myself," bit looked a lot like the landlady had some kind of realization that goes beyond the rest of the page. That may be stylistic, but the next panel lends itself to such a setup as well. Asako says she's joking, but it's mostly off-panel and focused on the floor, like the mangaka wanted to hide her face. And this may be a translation thing, but the comment "joking, just joking," seems a little too composed to me, but that might be reaching. But the "joke" itself also didn't really have the feel of a joke, either, in how she said it and in the fact it didn't show her face either.

I dunno, maybe I'm just overanalyzing it, but it seems to me like there might be some implications for future chapters.

you're right, you're overanalyzing. Damn y'all be putting essays here lol

Damn the main characters in this manga are so fucking selfish. Here's Kaori clearly taking advantage of Ruri's friendship to have her come see Hoshikawa, even though Ruri clearly didn't want anything to do with this shit. And then there's Hoshikawa who wants to apologize just to feel better about herself. It never crossed her mind that maybe Ruri didn't want to ever see her again. Bunch of assholes, both of them.

The ending of this manga is going to kill me

The MC as well it seem

damn all the heartless mf in the comment section bullying a 15 year old for what she did in elementary lmfaoo y'all have some serious issues (˘･_･˘) Shizuku is clearly suffering for what she did that's why she's like this. PEOPLE GROW UP AND THEY LEARN GODDAMN IT'S NOT LIKE Y'ALL DIDN'T GO THROUGH THIS KIND OF SHIT OR R Y'ALL STILL 12YOs

uwauwauwauwauwa
The Beginning is Always Like This discussion 30 Nov 19:38
Quote

anyways the last update is like may (?) is it discontinued???