That is one shitty landlord. Sending their young daughter to deal with unruly and disruptive tenants is pretty bad on multiple levels.

They may be training her to potentially take over the business when she gets older.
It's really not a big deal, "disruptive" does not mean violent.

BoobTwinkler
You are totally in love with me, aren't you? discussion 29 Jan 20:43
Quote

Mako is so dang smol, I love it.

She could still be straight, she might just really enjoy being a tease.
(Not that I subscribe to that theory myself, just saying.)

BoobTwinkler
You are totally in love with me, aren't you? discussion 30 Dec 02:56
Quote

So I'm not complaining because duh it's adorable yuri, but who the hell tries on bathing suits in the nude?
Think of the other customers who'll want to buy the suit you didn't get!
@_@

And here, we see the wild highschool lesbian in its natural habitat; The classroom.

She may look straight at a glance, but an attentive viewer may notice the way she overheats when a prospecting mate glances in her direction. Though a mostly undocumented phenomena, it is believed that licking another female's fingers is a way of signaling amorous intent to other females, prodding for signs of reciprocation.

BoobTwinkler
A Day in the Lives of a Gyaru Couple - Lunch Break discussion 19 Dec 06:26
Quote

Oh hey, candy cigarettes! Haven't seen those in almost twenty years, do they still exist in Japan? I know around here in my country were banned because some people take them way too seriously and think they make kids become smokers.

BoobTwinkler
For Each Retweet, Two Straight Girls Who Don't Get Along Will Kiss for One Second discussion 16 Dec 23:57
Quote

I have been deceived, lied to, scammed and quite possibly; bamboozled.

BoobTwinkler
Who Decided That Blues Had To Be Cool!? discussion 09 Dec 16:59
Quote

"I REALLY HATE BEING COOL!"

The logical solution here is obviously a foursome. <:D

BoobTwinkler
Milady Looked Extremely Troubled When Her Engagement was Annulled, so I Stepped In to Help Her discussion 01 Dec 15:09
Quote

Gotta agree with these sentiments, there was too much attention put on showing that one above-and-beyond stupid asshole screwing himself over in minute detail for no particular reason.
It reads basically like one of those bad self-insert fanfics that are just contrived cliches where the writer throws in their high school bullies into being the worst assholes ever and receiving their comeuppance for it.

10 bucks says last girl had an overnight change into delinquency as a last minute challenge.

"Let's all gang up on her and then have some fun with her later."

You can be naïve if you must, but the message is pretty clear.

Not really, that is exactly the sort of thing they would say even if they're not planning to rape her, generic tough-guy-bully-trying-to-be-intimidating stuff. 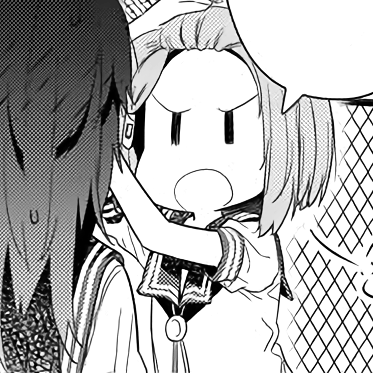 Great, she went from one extreme in having an overly critical and possibly ill-intentioned person as her editor to having the opposite extreme; a fangirl who probably won't be able to look at her work without rose-tinted glasses.

I see no issues arising from this. ヽ༼ຈل͜ຈ༽ﾉ

@bitfarb I did for a few panels not sure why- probably just because of how long they teased us with no progress in the past.

But it was amazing it WASNT a tease :)

Probably because Mari was being a lot more ditzy than usual I think. I don't feel like she's the type who'd run outside half-naked without realizing it, for example. She's usually a lot more level headed and rational.

Truck-kun foiled again!
What do we say to the Truck-kun of death? NOT TODAY! >=D

...Someone should probably tell Japan that the whole "foreigners kiss as a form of greeting" thing only really refers to a few countries, and England is certainly not one of them.

Then again, if it leads to Yuri kisses I guess it's fine?

As adorable and wholesome as this is I just can't stop looking at it as enabling terrible business workplace leadership.

...I mean, it would be near impossible to show a Japanese desk-job worker's work without doing so, just by virtue of "that's just how awful Japanese working conditions are."

Pushing in a narrative addressing the topic would certainly be noble and all that, but it would kinda pull away from the intended focus of the piece. (Which is the slice-of-life relationship between the two women.)

I know it was a twist but stuff like this needs better tagging. I did not want to read this.

Normally I'd cut the author some slack when their series gets axed and they have to hurry up and finish everything they started prematurely, but in this case the entire drama was literally started in the last two chapters after the end date was set in stone.

Like, I totally get having to abruptly cut off something that you don't get the time to do properly (Bleach REPRESENT!), but why on earth start something when you know you only have 1 more chapter to wrap it up and it won't mean anything? There wasn't even a journey in there to experience the characters going through it, it was just panel after panel of "what's going on?" and then it ends and that just happened.

...At least it ended happily.