This is a weird one. Coming into this I was thinking "What rare jewel is this? A Ran/Sora doujin by Kurogane Ken of all peope? This could be amazing!" But it was kinda...off. Ran and Sora don't have a tsundere type relationship, it's very earnest, though Ran does have a somewhat dry personality.

Also the mirror images are a reference to Sora's most famous performance (one of the most original and iconic throughout Aikatsu's entire eight-year run), but it's just the special effects of the Aikatsu system, not anything magical or inherent to her - let alone something that could be used...like this.

All in all, fairly unsatisfying for me at least, but as you may be able to tell, my investment in this pair is, perhaps, above the average. :P

Cryssoberyl Uploader
I Will Not Be a Girl discussion 05 Jan 11:56
Quote 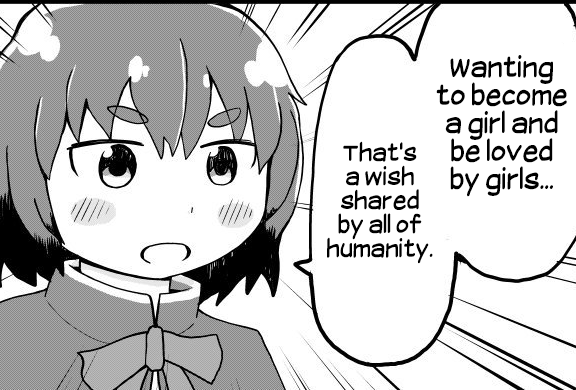 To me it's just a pleasure, nothing guilty about it at all. At least in general.

This particular story is less pleasant, because it certainly seems like Chinami is set on punishing Yukako for what happened in their past. Even by the measure of affairs, this isn't a healthy one. At this point I honestly can't say Chinami actually loves Yukako, or vice versa. It seems like they are just trying to cling on to something as life and time passes them by. Whether they can move to a healthier place I don't know, but to do that Chinami will certainly need to let go of the grudges she's holding.

On the contrary, Masumi is the one at fault in this situation. There is no rape here. She's agreed to everything. In fact the only reason they're still doing it is because she said she wanted to, even though Satoko was all ready to give up in chapter 1. Masumi is the one using her niece's love to attain sexual satisfaction without having the courage to stare being a lesbian in the face and return the affection she's being given. I hope to see that change, but in the meantime let's stop the bullshit of pretending Satoko is the one "taking advantage".

But they have separate rooms?

In Japan it is quite normal for married couples to sleep (that is, actually sleep) in seperate rooms. It's just another form of politeness; sleeping in the same bed with someone else can be noisy, uncomfortable, hot (as in temperature), disruptive when people are getting in and out of bed on different schedules, and many other issues. Having seperate beds in seperate rooms sidesteps all of that.

Cryssoberyl Uploader
A Day in the Lives of a Gyaru Couple - Lunch Break discussion 20 Dec 01:27
Quote

Finally a yuri manga that addresses the elephant in the room of how gross it would be to kiss a smoker.

Thank goddess the hair wasn't cut off. I spent the whole story dreading that it would happen. Finally another story about beautiful long hair staying long.

Hm, that was really good...excellent chemistry. I was hard on Touko for a lot of YagaKimi, but her nonsense did eventually get rectified and I became a genuine supporter of her and Yuu. Still, I'd be fine seeing this as an alternate timeline. Thanks /u/.

Cryssoberyl Uploader
We Graduated From Being Sisters to Girlfriends discussion 19 Nov 20:46
Quote

I love how the author pixiv it's full of fan art. They were just a regular yuri fan like us.

I mean, it's right there on imouto's shirt:

What's an "Aikatsu for sex work?" And what's a "ransora brain?"
I'm sorry, I figure it's supposed to be easy to understand since the translator casually talks about it in the creds, but I have no clue.

Aikatsu is/was an idol anime series and associated card collecting franchise, which has been going since 2012, although its future is currently a bit up in the air. "Ransora" is, or should be, "Ran/Sora", one of the best and gayest pairings of the many heavily suggestive pairings that has come out of Aikatsu through the years, thus proving Shuninta's exceptional taste if she happens to be a fan of them.

Anyway, I appreciate the work as always Akiba, although...as much as I usually keep this to myself, the excesses of this particular chapter's script force me to add, I have long been and continue to be not a fan of your overly loose and self-indulgent localization style. Please tone down the attempts at glib phraseology and just write what they say, instead of something that recalls the worst tendencies of dub scriptwriters.

That is a ridiculous amount of ear piercings. I'm into it, but I'd sure like to know the background there.

"Mob" is a Japanese term for unimportant background characters, basically as we might call her an "extra".

It was great and Masumi is totally into it. There are no problems with "manipulation" here; Satoko is an enthusiastic initiatrix but always asks clearly what Masumi wants and gives her plenty of opportunities to stop. Loved it.

Many thanks for your work on this piece, Noca Scans. 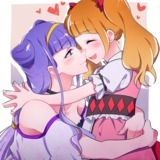 Except for the part where they are torn apart never to meet again and Emiru spends the rest of her life pining for Ruru. Yes, I am still very bitter.

A lot of artists get drawn into the trap of wanting to "correct" or redo their previous works, and what this sounds like to me is that it will be months if not years before the story is actually continued in favor of Taiyaki's personal crusade to revise their own history; a massive project that no one but themselves will really be invested in, and even that may fade when the thanklessness and lack of novelty in such an undertaking sets firmly in.

All just my opinion of course. It may well be that I'm underestimating Taiyaki, and I certainly wish them the best, but I honestly feel this is a mistake. It's better to keep moving forward than turn back and try to retread the past.

Well, it was good up until the penis proxy and, for lack of a better term, "hetplay". At that point just draw actual het. I can't even really consider this yuri.

This was really nice. Far more laid-back and natural feeling sex than is often the case.

In a lot of ways, this was amazing. Honestly one of the most depressing - though to be clear, comparatively unimportant - side-effects from COVID-19 is the complete shutdown of the 2020 fighting game tournament circuit, which was showing huge potential to be a memorable one early in the year.

Thanks /v/ (wow that sounds weird to say). Though maybe a bit less board jargon in the translation next time.

Generic but well-executed for what it is. "Moe up the butt" tag would not be out of place. Thanks Unknown_Justice.

Thing is, an incest version of this pretty much already exists:
https://dynasty-scans.com/chapters/my_little_sister_is_too_cute

Cryssoberyl Uploader
All of Humanity is Yuri Except For Me discussion 09 Jun 21:10
Quote

Well the plot and pacing were a mess throughout but I'm fairly satisfied with the final chapter. When this started I and others were rightly skeptical after Idol Pretender, but this goes some way to redeeming the author after all.

A dog is apparently not fine too, it seems. Also, "the right time" would be any time after you've given up smoking and your mouth, hair, and clothes don't stink of cigarettes, Kanda.

Topical - in more ways than one. (I hope you see what I did there.)