I have two problems with this series, I don't like either of the main characters and I don't have any idea why I should like them.

I really love absurd comedy (btw I myself always called it nonsense humor after watching nichijou, mainly because this description works in german as well). I watched and very much enjoyed stuff like nichijou, danshi kokosei no nichijou, pani poni dash. I even bougt the helvetica standard manga when I was in japan but this is nonsense humor I don't get, I never was that big with memes so thats obviously a part of that but I gave this a chance because I normally enjoy this genre so much. I read the manga when it was first uploaded on this site and I tried watching the anime both are in my opinon disappointing at least compared to also in my opinion way funnier crazy japanese comedies

I have the time now so I started rereading all my favourite yuri manga on dynasty and this is the one I'm looking foward to the most of all the yuri manga I like this one the best. Mostly because it's good in every aspect I hope for while reading manga in general. The story is sweet and heartwarming, the characters are interesting and fun, the comedy is adequate (as in I enjoy it very much, but that might be a bias as I said I love this manga) and there's yuri as well.

Trexxe
A Kiss And A White Lily discussion 25 Dec 06:44
Quote

The main problem here is not the manga's structure, but people not getting said structure. If you go in with the assumption it will follow the "main pair" as the central driving plot you just misunderstand the point. Shiramine and Kurosawa are the framing device that holds the narrative together, but ultimately it is a story that follows relationships at the academy.

I'd argue that not being able to follow the plot is not because I'm stupid but it's because the author didn't even try to make it clear. If for example there was a clear pattern like one chapter of a volume about the main couple and the rest of the chapters are about the other main couples or if the chapters about the other main couples would be side chapters like in comprehensive tovarish.
This doesn't read like one plot this story reads like a compilation of short stories with an excuse to link them together.
Also because of the huge focus on side characters the allegedly main couple didn't get enough development in my opinion.

It's a cute manga and i'll probably keep reading but man this story feels like I've read it a thousand times already at least up to chapter 3.
the mermaid was most likely somebody who saved her while she was drowning, maybe a suicide attempt
the teacher might be a relative or the first person who was nice to the blonde girl you know basic stuff
hopefully this will surprise in some way or I'll forget about it in no time

feels good to finish this after all those years and in my opinion it was worth the wait although I'm sad it had to end early. Man this could have gone places, could have been one of my favorites of all time but the good but kind of week resolutions to the couples in the manga means it's not one of my all-time favorites but it's still a real cute and good shoujo ai manga

I'm very happy that there's a new chapter out for this but now I also want new chapters for the other manga I thought was abandoned like holy girls paradigm or comprehensive tovarish.

Thanks for the chapter though and please finish miniature garden cosmos I need closure.

Trexxe
A Kiss And A White Lily discussion 20 Mar 21:41
Quote

This picture sums up this manga perfectly. The main characters are in the middle which makes it seem that they might be the main focus of the story but if you look at the picture as a whole you notice that the side characters make up about 80-90 % of the drawing.

I don't despise this manga but keeping myself from dropping it after the story got sidetracked so hard that I midway through the manga forgot who the main characters of this story were was hard. I wouldn't mind if the story was about the school rather than shiramine and kurosawas relationship or if the sidestories were actual side chapters.

This manga really started of strong with two good leads and a not very unique but interesting enough setup for their relationship but it diluted into an utter mess of sideplots and sidestories that have little or nothing to do with the main story except the fact that they go to the same school.

I really liked the early chapters but the ending was weird as fuck. Also the blond former spy girl just vanished...

I think it was Kuki, she admits it while the others think about whether they did it or not.

On page to she's the only one who is just embarassed and turns red.

I have a quick question on the first page of the first chapter it says original work by Moonphase, manga by Fujieda Miyabi Fujieda and Minamoto Hisanari. Also it says its long awaited debut as a comic.
I thought this must mean it's a light novel adaptation so I looked around a little bit. On Baka-Updates it says that this manga is adapted from the Marble Color Chapter in Chatting in the Amber Teahouse but I don't think that matches up. The only other site that had a lot of intel about this series was wikipedia, but the article is only aviable in japanese and italian.
I don't want anybody to dig around for me but if somebody knows about the original work I would be delighted to hear about it. 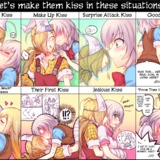 Even the subtext is pretty weak in the manga, but the chapter with the kiss is as far as I know the last extra to appear and doesn't it kind of show that at some point even the author thought about a yuri ending :)

It's kinda sad that the closest to romance we get are the last two pages in chapter 23. 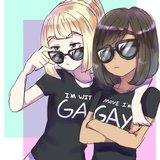 Because nobody seems to have posted this yet but there is a profound reason to pick the girl. As far as I know pokemon eggs hatch a little faster if you pick the female character. As far as I know. Could also just be a myth or changed in the newer entries in the series.
A friend of mine he's really into breeding told me about this.

I still revisite the series from time to time because it's one of my favourites. The fact it got cancelled saddens me but what I really don't understand is why the didn't let him finish his story. It seems that it could have ended in one chapter without feeling to rushed. Personally I would prefer an ending to what we got. It isn't a bad place to stop but I would feel a bit more statisfied if there was one more chapter showing us what happened to them after highschool.

I love this series. It's original and there are a lot of possibilites to go from here.

It might turn to drama when she starts to lose her "amnesia personality". If she gets better the I she is now will be lost. But it doesn't have or need to. It's just a theory. A Yuri theory.

Given the author, I kinda doubt it. Remember, if the "I" she is now vanishes, she reverts back to being the loving girlfriend she was to start with so they're still happy.

You're probably right but i still think it's ingenious story telling.

Just the fact that the strory would be able to go into this direction just amazes me. Also we don't really know anything about they're live before except that the amnesia girl was the one to initate things.
Isn't it awesome that the author took a well-known plot and changed it into a lighthearted comedy. Yet still keeps the possibilities to turn the story into a drama at any given point, in a way it won't feel forced.
By the way ever thought about the possibility that the not amnesia girl falls in love with this other side of her girlfriend.

Yet again you're probably right, but I love to think of all the ways this story could develope. Still one of the strong points of this series is that it doesn't need to turn into drama. As long as the jokes are good and and the cuteness doesn't fade I will still enjoy this series even if it turns out I expected way to much from it.

I love this series. It's original and there are a lot of possibilites to go from here.

It might turn to drama when she starts to lose her "amnesia personality". If she gets better the I she is now will be lost. But it doesn't have or need to. It's just a theory. A Yuri theory.

I love this series and would hope it would be continued. I even tried to get the raws myself when I was in Japan. I looked in every store we visited and also asked an employee in a book off, but she couldn't find it anywhere. If anyone ever finds the raws please post them. Although I can't read any of it I would be statisfied if I for once saw the ending xD.

Maybe I'm overthinking this but isn't a lolicon an adult person who likes little girls/boys. If so it's a reverse lolicon.
I'm aware that the tag just means child fucks/gets fucked by any human, fantasy being, animal, plant, furniture....
But the woman in this manga wasn't sexually attracted to the girl she just became a slave to her desires. The little girl could be exchanged with a bald old guy, the class would be a english course for elderly and it still would be the same manga. It wouldn't be on this site but it wouldn't make a difference.