Any other yuri manga where the gyaru gets teased or topped by the quiet one?

This feels a little bit like it could be a prequel to Tatami Ouroboros Duo.

I always did feel like Rika and Neiru were the most interesting potential couple. For the sake of holding on to the good memories, I'll leave it at that. 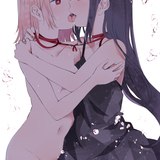 It's Harumachi Tsurara, all of their characters have eyes like that. Of course, half the time they actually are drugged or mind controlled so it fits well enough.

I'm not that great at subtext/implications. Can someone tell me what Toda couldn't put into words?

From the imagery, I got the sense that human sexuality is something that a lot of her formative memories are connected to, and she wants to be able to convey her feelings about it through her art.

Just ask her to be your housewife already, Maya.

I want to see someone actually release the pics for once, but it won't happen.

It happened in Netsuzou Trap, although the fallout from it ended up being pretty mild compared to, well, everything else that happened in that series.

In a way, this kinda feels like a story about the difference between fantasies and reality. When Megu learns about soulmates, she thinks the idea of a desire so strong as to overpower her will is hot and romantic, but when she actually experiences that kind of desire, she resolves to stay faithful to the one she loves anyway.

I think I'd be annoyed with something that open-ended in a longer series where I'd become invested in the characters, but as an ending to a two-shot, I'm okay with it.

I can understand why people wouldn't like this kind of stuff, but I think page 7 of this story does a pretty good job of explaining the appeal for those who do, honestly.

Personally, I'm glad that omegaverse fiction is still finding new and refreshing ways to be problematic.

I always thought this was a yaoi/fujoshi thing....

It started out that way but then yuri artists got into it too. Even some big names like Mikanuji and Takemiya Jin have drawn omegaverse stuff.

Everyone seems happy in the end, so it's fine by H-manga standards, relatively speaking.

I only realized after reading it that "Lulu Yeah" is meant to be a pun on "R'lyeh". 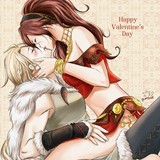 We need more Octopath yuri though, cause ain't Prim canonically bi? I thought I remembered hearing that somewhere

"Canonically" is a matter of interpretation, but her Allure skill works on NPCs regardless of gender, and it's easy to read her dialogue with pretty much any of the other Octopaths as flirty if you're inclined to do so.

Normally I'd be like "hey, it's not like they need to worry about having kids together", but with this many premises, who knows what could happen.

I mean good maths and all but there is no alcohol in Liquor Chocolate, the process of cooking it causes almost all of the alcohol to evaporate, leaving only a trace amount for "taste". Same thing happens with cooking wines as well.

Apparently that's a myth, and a significant amount of alcohol remains unless you're cooking something for hours:

It'd still be really hard to actually get drunk on chocolates, though.

Can someone explain me what does "wholesome" means? Any time I try to search the meaning it says that it's like healthy, and I don't think that sounds right in situations like these comments, for example. Sorry for asking this in this place

Everyone had a good time in the end, so it's fine!

Just finished reading through the second volume; I can definitely tell it was cancelled abruptly, because it sets up major new plot points in the last couple of chapters that are never resolved and then ends on a cliffhanger followed by a "what-if" chapter that sets out one possible ending. Aside from that, it's more of the same edgy dark fantasy action from volume 1 with the intensity and lewdness dialled up even more than before, but yeah.

Given the art of Komari with vampire fangs at the start of the previous chapter, I'm gonna take a wild guess that she does not, in fact, stay dead after this.

I too enjoy a nice meal of plastic models. As they say, "yakiniku set meal."

This is a double joke, by the way. "Yakiniku teishoku", "yakiniku set meal", sounds like "jakuniku kyoushoku", "survival of the fittest", so it's an old joke in Japan to say that your favourite saying is "yakiniku teishoku". So the joke isn't just that she filled in her answer in the wrong place but that her wrong answer happens to be a common joke answer.

The relationship dynamic is a lot switchier than The Real Her was, and the "domme" is a whole lot less self-assured, but it was the first thing I was reminded of as well. 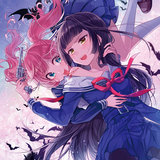 The last thing I heard was that it was on indefinite hiatus for reasons related to the author's health.

Looking at what's been tagged with this so far, it seems like the defining characteristic is that both of the leads are objectively ridiculous, like a comedy duo with no straight man (uh, so to speak).

Well hey, Tomoka seems to be kinda into it, so this is about the healthiest relationship development you can expect from the author.