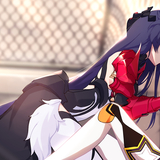 Honkai is a lot more yuri than other gacha games. It has actual kisses from official sources. I would only consider Sakura x Kallen and Seele x Bronya as canon pairings though. Kiana loves Mei, but it is unknown whether Mei loves Kiana romantically. However, given her recent development and back story, it's difficult to believe Mei doesn't love her back. For the other pairings, it's more subtext personally.

I can die in peace. I never thought I would ever see this manga update again. Thank you so much to the group that's working on this.

I thought they were going to reveal that it was actually Mishiro that wrote the fanfiction lol.

Sorry, do you happen to know which arc was removed? I'm trying to figure it myself, but my chinese is quite limited.

The Xuanyuan arc or whatever 圣痕之秘篇 translates to. It's the one after Theresa meets Sakura. Should be chapters 15 - 22. This site sort of has them, though some of the links don't work properly. Someone managed to find them and upload them: https://void.cat/#6cfcb3a4137d7c5d5e1315230551722c24ca63bf

Someone on Mangadex also informed me that someone on 4chan was keeping track of which pages were missing and found out how to still access the by playing around with the links. I've backed up the missing pages, so if you need them and they get removed, just leave me a message:
https://pastebin.com/TrpC58sz

You're amazing. Thank you so much!

A few pages were removed here and there and a whole arc (100+ pages) was removed from the "main story" most likely because China no longer wants certain historical figures being depicted as characters (around the same time F/GO got banned). For the people who thought it was a bit disjointed before the censorship, the missing arc makes it way worse since it actually directly connects the two arcs before and after it.

Sorry, do you happen to know which arc was removed? I'm trying to figure it myself, but my chinese is quite limited.

The end of each chapter makes me go "Whaaaat?!" every time. I love it.

Speaking of r madoka, congrats on the spot on that r place art piece

From the time I saw "Homura did nothing wrong!" on there, I knew I had to sacrifice sleep to defend it.

I am in a desperate need for a redrawer if I am to make decent quality Maitake releases....Anyways, here it is! Hope you guys enjoyed it!

Hm, I might be able to help out if you can't find anyone else. I won't guarantee anything though. I'm not entirely sure if I am skilled enough.

I haven't noticed anything. Could be browser specific, what are you guys using? I'm using firefox for reference.

I'm using Google, but I'm on a tablet so it probably some resolution thing, never had an issue before though, maybe the file type changed or something :P

I have the same problem since I usually read on my tablet too. I'm pretty sure they changed the resolution or something. When I switch back to PC, I'm able to read it just fine.

When I finished the game and the credits were rolling, I thought to myself that I really wanted see to this specific scene. Where Lillie will reunite with protagonist when she was going to fight against her and Nebby as the challenger vs the champion. I am so glad that someone had the same idea as me and bought my dream to fruition.

That rabbit plush sure went through a lot LOL. I just love its expressions when Itsuki is abusing it. I'm sure it will continue to go through a lot more hardships considering how Sawa is. xD

Well that was unexpected and different. I was expecting a more typical story from how this started out, but I ended up pleasantly surprised. This was a very interesting read.

Personally, I quite enjoyed this. I do think Itsuki has the upper hand in this situation and she realizes this herself. Itsuki knows that Mao is scared of losing her. Itsuki also holds the power to end their current relationship whenever she wants (If she decides to not renew her rent agreement and move). If Itsuki decides to move on, she can do so at anytime. Itsuki is using this to her advantage by slowly making Mao feel more and more insecure to force Mao to spend more time with her and prevent Mao from forming any close relationships with other people. Eventually, Mao will be forced to make the decision whether or not she will return Itsuki's feelings. While Itsuki has plenty of friends to fall back upon, Mao doesn't really have anyone. This will make it harder for Mao to decline even if she doesn't see Itsuki in a sexual light. So I think Itsuki is way more manipulative than Mao.

I'm a bit confused. Just to clarify, the Senpai was having sex with Ayaka on the last page right? From how I see it, the Senpai told Kanako she loved her. Once they're together, the Senpai desired more, and is now also cheating on Kanako with Ayaka?

I am on chapter 5 and I can't figure out the 3 question. I usually dont do this but I am throwing the flag in ...
. I admit defeat D:

Question: what kind of case is this
- she vanished and is hiding
-it's a kidnapping by someone
-its a disappearance linked to the seven mysteries

Question: something wasn't right about the room just after ichigo Sasaki disappeared. That was....
-the soda water she'd been drinking before
-ringo attitude
-the copy of Night on the Galactic Railroad lent to Ringo
-Why she disappeared in the early morning

Question 3: And another thing that was off in the Sasakis' room, before we went to the bath...
-The mistaken date of manufactor
-The so day water she gave us
-the unread copy of Night of the Galactic Railroad
-The closed curtains, even though it isn't cold out.

She vanished and is hiding
The soda water she'd been drinking before
The closed curtains, even though it isn't cold out.

I had difficulty with that one too lol.

Just got all the endings/CGs for the game. I feel like the 7 different endings statement is kinda misleading. 5 of those 7 endings are just "Gameover/Bad endings" because you messed up on your choices during the mystery portion of the game. You should be able to get all the bad endings anyways, because the mystery portion of the game is hard as nails. I'll be impressed if anyone can actually solve all the mysteries and reach the same conclusion as Suoh.

Overall, although I like the game, it's difficult to describe how I feel about it in the end. It was rather abrupt, but I suppose it was intentional. I'm really looking forward to the Autumn chapter though. I quite like Yuzuriha.

Is was cute hope there another part To it

Yeah, there is a sequel to this. No editor though.

I know that a lot of people have raved about episode 4 in the latest season already, but I just can't ever get over the fact that the after sex scene was so genuine and sweet. There wasn't anything super awkward or gross, it was just two people being in love with each other after all the hell they've been through. I am not even gonna lie, I cried a little at the scene. And then I got completely destroyed by the safe place scene at the end of the episode ;_;

I'm kinda gonna to agree with telamon here. I loved the sex scene, but I was like "Whoa. Everything is moving so fast. I don't know if I am ready for this. OvO" I read a lot of fanfiction too, so that might be why. I agree 100% about the part where they're just two people being in love with each other after they went through. Their relationship is so beautiful. It was never out of character or anything. You don't need words to show how much they care for each other. Their actions and the things they are willing to do for one another speak volumes.

My recording of the latest episode somehow got messed up so I haven't actually saw the part where Root was presumed dead by Shaw. I don't know if I actually want to get there though...

When you do get to that scene, pay attention to the lyrics of the song that plays. Those lyrics.. hit me so hard. Poor Shaw.. ;_;

I never watched the actual show but I was kind of interested and I heard of the news that yet another one took the bullet, literally. Is this a joke?

Person of Interest just had the misfortune of airing after all the other lesbian deaths. The show was actually finished filming a long time ago (over a year?), but they put off airing it until this year. If it had aired right after the filming, I'm sure there wouldn't be such a huge outrage. I personally thought Root's death was handled extremely well. It was a great episode. It was fitting from a story perspective and the writers paid a huge tribute to her. Season 5 is the last season and the writers warned their fans that their favorite characters will die. The writers had planned for her fate from the early conception of her character (Heck, even her name is meaningful to what she becomes at the end) and they wanted to go out for the finale.

What ?! They tried a romance between Reese and Carter ? When was that, I didn't even noticed... Or I don't remember ?

Sort of. They actually kissed when they were hiding in the morgue. Their kiss was unscripted though. Reese's actor just felt that it was appropriate for the scene. I personally never saw any romantic subtext between Reese and Carter prior to the kiss, but other people did.

Wow.. this is great. I read this expecting only mindless moe. To think that there's a story that connected everything together is just amazing.

That subway scene really reminded me of the one in Edible Flowers Chapter 2. Probably since I read it so recently lol.

Mizuki/Moe is probably my favorite couple from this series. I just love their relationship.

Very cute. I wouldn't mind a grown up Remilia.

Somebody please explain where this peropero licking meme is from. I see it all the time and can't find the original reason for it.

A very cute doujinshi of my favorite Touhou pairing.

To be honest, I really enjoy their inability to communicate properly. It makes sense, given their species and the hatred they are usually subjected to.