When I see a real life yuri couple, I try my best to watch them from a distance with a wide smile on my face, sorta like a creep... Um what the hell are they eating that costs them 80,000 yen?! That's downright insane...

This artist draws some excellent backgrounds. It made the atmosphere of the story so much more immersive. 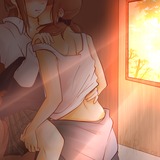 Seina is so strong <3

Am I the only one who enjoyed this? Impregnation between girls is like so hot.

I wonder if the mangaka herself is an actual pedophile? The way everything is described in the manga feels so real and relatable... so hot my pubes explode

So, is Namori a guy or a girl? That goal of getting ripped is unusual.

I was getting pretty worried, but then I stumbled upon this picture while I was reading through the Image Comments: http://ks.c.yimg.jp/res/chie-que-12157/12/157/048/597/i320. It's the Namori steamy image with glasses girl and other girl. Apparently, she's the one on the far left but who knows if that's true. Until proven otherwise, I'm just gonna hold on to my hope that Namori's a girl.

Also, I can definitely relate to her working out issues. "This is it, I'm gonna start getting into shape today! ... Nah, I'll do it tomorrow."

Her name is written pretty clearly as なもり so yes that is Namori seated with the rest of the Yuru Yuri voice actress cast. It also says（原作者） indicating her as the author of the series.

Ah, saw this on e-hentai awhile ago. Nice to see it translated.

Looks like the same artist that made a similar futanari doujin except with Honoka x Maki. Guess Honoka likes the NicoMaki girls. 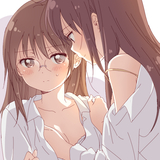 I think having high standards for body weight is a good thing, tbh. So many people nowadays are overweight so fat is now the new average, but average =/= acceptable. People should strive to improve themselves.

Just give in to your urges and molest her already <3 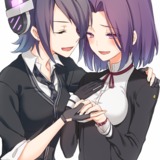 So Natsuko gets off to people's emotional pain. Interesting.

I feel like I can almost relate to this... well, not exactly to the point of purposely causing someone pain but somehow, the fact that seeing someone sad and pitiful is like they're revealing to you their vulnerability, it's almost a pleasant feeling. When my SO cries, it almost makes me happy... knowing that it's me they're looking for comfort in. I guess I just like being in that position. Of course I do want to make them feel better, but I can't help but be a little pleased for some reason when they're sad in front of me.

Dunno why you're all taking it so seriously, this was pretty funny. +1 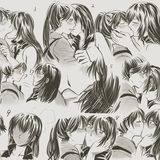 I would like to point out something regarding the whole debate about the biological use of a clit versus a developed penis. Generally most sexually dimorphic creatures have a "male seeking female" element. Even in plants or coral, they release huge clouds of pollen/spawn that seek out the eggs. Mammals have that as well generally, but it's more complicated than the more primitive "dump tons of buckets of sperm into the air/water and hope it meets something" method. The whole mammalian concealed ovulation and penile-vaginal system makes a clitoris make much more sense. If the female partner can be given enough pleasurable stimulus, it will sedate her long enough for the male to inject that Het goodness into her vagina so she gets Pregnant.

True enough. But my point is, if not for the fact that we were all in between male and female in the womb, I don't think females need a clit, but rather, is a (convenient) leftover, like male nipples. By the way,

If the female partner can be given enough pleasurable stimulus, it will sedate her long enough for the male to inject that Het goodness into her vagina so she gets Pregnant.

That sentence made me lol xD 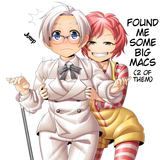 Females don't have a clit for the sole reason of pleasure since it serves no actual reproductive purpose. It's just a leftover of what could've been.

Still no. It's not because they have the same origin and that because of hormones they developped differently that one of them lost its purpose. They just developped into different purposes.

A clit has twice more nerve endings than a penis. You're telling me it serves no purpose in the reproductive process?

Well, a woman's clit feeling good doesn't produce or increase chances of pregnancy. Just because it has more nerve endings (and mind you, it has more nerve endings in a concentrated area, as in, a penis has the same amount but it is just widespread across the entire member--and doesn't that make sense, considering it's just a clit, but expanded, then further expanded during male puberty?) this doesn't mean it actually plays a role in reproduction. Last I checked, in countries that practice female circumcision, despite the fact girls' clits are mutilated beyond repair, they're still quite able to reproduce. Fact is, the reproductive process between humans requires three key components: viable sperm, eggs, and a womb for the fetus to develop in. Nothing more nothing less, as long as the woman keeps herself safe and healthy enough to birth the child. 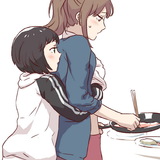 Her hand is dangerously close to that stove..

How is big clit different from futa? A dick is literally just a big clit.

Well theoretically it is, but is a tad bit more complicated than that ;P

Not theoretically, what the fuck, it's scientific fact. Basic biology. The reason why females have clits in the first place is because we were all at a state in between male and female in the womb and if your chromosomes determined you male then your little clit would develop into a penis. If not, then it stays a clit. Females don't have a clit for the sole reason of pleasure since it serves no actual reproductive purpose. It's just a leftover of what could've been.

How is big clit different from futa? A dick is literally just a big clit.