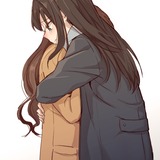 AshuraX, your comments provide lots of insight and depth into the pictured situation, not to mention humor.

A pleasant read, however...

...what I really want to read is a sequel based on the panels at the bottom of the credits page!

Very enjoyable. Is that a tear in Sorano's eye on p8? Out of this world

I thought that it was more her remembering that conversation as she got to that train station and it was the last time she saw her.

Occam's Razor. Gumilove, this interpretation makes a lot of sense.

My question is whether this is a sad but hopeful ending, where she is leaving to meet her future, or a horrible ending, where a teenage girl commits suicide over a failed love.

Yes, she is certainly waving good-bye to both her past and her friend's apparition. However, the fact that the crowd visible on p 26 has clearly disappeared by p 28 indicates that those people have just boarded the train (i.e. the train is not moving). Re never boarded the train.

I maintain that Re arrived at the train station with the hopes of a chance meeting with Fuyu. Re just happened to see Fuyu's apparition instead. Trains are a common form of transportation in Japan and for two friends to frequently meet at a given train station is perfectly normal.

Thus, I see no reason to believe an implied suicide.

Wait, is she getting on the train or in front of the train? The answer to this question will significantly change my opinion of this story.

Neither; it looks like she is waving good-bye as the train departs.

I wonder if there are people like that in real life...

I am Solid Ice. I like to read. My favorite color is blue. I could expand on more engrossing details, but anticipation makes everything better ;)

Concise with a cliffhanger-style twist at the end.

The awkwardness between Ito and Sasano makes their development seem very natural.

Ironically, while Kazuki is playing games, Mio is too innocent to notice.

Interesting twist on the classic tale.

Solid Ice
A Lollipop or a Bullet discussion 25 Aug 23:20
Quote

Masterpiece. This work is so expressive when it comes to Mokuzu's rough situation and how she and Nagisa take it in. The ongoing air of mystery enhances the anticipation throughout. Although tragic, the final ending runs in line with how these events would realistically unfold.

Wow. This is exceptional. So much excellent material in so few pages. Their eye contact and facial expressions say a lot.

The cover art is so full of emotion; very nice. A pleasant read as well. The second frame is the best one 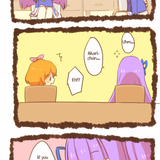 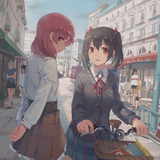 Such a delightful setting.

The glove-sharing scene is especially heartwarming. 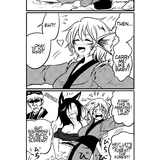