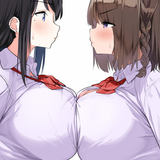 ^^If you mean the game, then yes, it mostly operates in an MC based way. Though from characters in this picture only the one in the back showed romantic interest in the MC, and is a yandere serial killer.
As a result of this, the game rarely solidifies any couples between the characters, be it straight our gay, with few notable exceptions. That said, there's a couple characters that are either gay or all but stated to be. On the girls side, from what I can remember, there's Anne and Grea, Bridgette and Cordelia, Silva and Tweyen, Vira, Halluel, and Freesia. Probably Apollonia, Farrah, and Ares, would count too.

No joke. From complete lack of background to perspective fails with that pentagram floor.
Still, that's not as bad as Zun's tradition of wasting your time with the content between first and final chapters in an arc, like if this was Shonen filler or something. This image is really sad to see now that Pekora cheated on Miko with the Reaper Queen, even giving birth to the Queen's children. As if Anthuria could ever do something like this without overheating.

Really love how ZUN made Reimu's intuition super good up to IN, but then that got in the way of the stories so he scrapped it away... along with the entirety of Gensokyo, currently in it's third or fourth reimagining.

I'm now convinced that Sakurako is the lesbianest of Japanese surnames.

Good thing she was working backstage.

Seems to me like the bath scene already happened offscreen, as per last narration box. 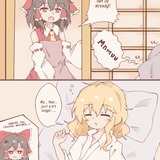 I'm guessing the one showing her true colors is actially the MC.
Anyway, with a title like that, I'm already having issues viewing it on a positive light, as I can't help but compare it to The Real Her.

So, the anxiety issues are there to make her more sympathetic, but the author still sees Neeko as just a spoiled NEET like originally devised? That'd explain a lot on the tone shifts.

My prediction: Hino will make Koguma wear the risque dress as "punishment", definitely with no ulterior motives whatsoever. Komuga will be embarrased until Hino teasinly encourages her, triggering Koguma doing an uncounscious sexy pose while saying "Really? Do I look cute?" Hino will immediately proceed to go ljghkhffhb and call the thing off before the redness of her cheeks reaches radioactive levels. I can hear the song in my head just from looking at this.
The original and the Pokemon X/Y versions are excelent.

Arisa making the most meta joke so far.

The fact she's being tricked is not what concerns me the most, but rather that her job consists on dealing with people who're likely very irritated after waiting for 2 hours under the scorching heat. And God have mercy if the console sell out while there's still a line.
It could end well, but requires people around her being supportive enough.

I'm wondering who are gonna confessed their feeling first?

"If we were a couple, we would do this and that together, right?" wondered the mute girl, while a certain mind reader became more red than a tomato.

^That dress looks Koguma-size to me.

So Hayate was hearing X, and concludes she'd been dancing in the enemy's hand... except that X pretty much states Hayate fucked up her initial plans to the point they had to start over with one people less...

And so, for once, no one was an idiot that day.

You could hear that punchline coming from a mile away.

blopa
The End Of The World And A Witch's Love discussion 08 Dec 04:32
Quote

This is seems rather good. The Mari seems to be able to either heal or control time, while Alice might be able to steal or copy other's powers? Would make sense considering she keeps saying she wants this or that ability. It's an interesting setting, I think I'll follow it to see what...

Don'd fall in love or you lose your powers.

... as I was saying, it WAS an interesting setting before the ending resorted to cheap drama garbage. 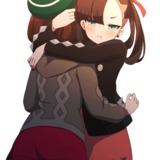 "Don't think this means you have won..."