I swear you make a slightly negative comment (and I say slightly negative but I don't even think it is negative to complain about how short the chapter is) on this page and there goes some random person with their "oh why you spread hate, I get mad, mangakas are human beings too unf unf (ಠ⁠益⁠ಠ⁠)"

there's a whole flood of comments ignoring the content of the chapter just because the page count was short, going so far as to completely devalue the work and treat it like a pointless filler. If you act like nothing has value unless it's exactly what you wanted I'm gonna get mad

This chapter's just what happened before, what's happening, and what's gonna happen next. It's different than the rest of the chapters of course, and it doesn't really give us anything new. The complaints about the short chapter are light hearted, I don't know why you're getting so heated up because of it. After I finished reading the chapter I thought, " Ah that was a short chapter I really wanted to see something. " It's just natural to notice it and comment about it because it's just so obviously there. When people wait for a chapter for a while and it finally comes out they're going to be excited and then just a little let down when nothing really happened in the chapter. Again, it's lighthearted. There aren't really any comments about the chapter because there's really nothing to make a comment about.

why have one when you can have all

Pa Toi
A Story of Awkward and Tender Memories Left by a Self-Proclaimed Scum Mother for Her Daughter discussion 23 Oct 11:33
Quote

Pa Toi
Our Yuri Started With Me Getting Rejected in a Dream discussion 20 Sep 19:27
Quote

i have a 50/50 feeling that she's gonna just say something along the lines of "mai-chan doesn't think that way about me" or she's gonna be an idiot and fall for it...

Pa Toi
The Guy She Was Interested in Wasn't a Guy At All discussion 31 Jul 09:42
Quote

Hopefully he doesn't mess up and accidentally tell her.. maybe. <_<'

Pa Toi
That Time I Was Blackmailed By the Class's Green Tea Bitch discussion 30 Jul 15:28
Quote

But... where are the hot bed scenes with Tongtong and Luxi having sex???

Pa Toi
A Yuri Story About a Girl Who Insists "It's Impossible for Two Girls to Get Together" Completely Falling Within 100 Days discussion 28 Jul 18:26
Quote

Hopefully the misunderstanding clears up, I am not prepared for angst T_T
ty for the chapter <3 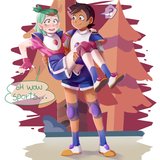 ^MY HEART GIVES A FLUTTER

Oh to be Emilie

A YURI MATCHMAKER HAS BEEN SUMMONED

it's your turn to become yuri, Watanabe... The yuri gods have chosen your fate

Historians shall call them the best of roommates

Pa Toi
The Guy She Was Interested in Wasn't a Guy At All discussion 09 May 09:36
Quote

Pa Toi
A Manga Where Mafuyu and Kanade Just Do the Lewds discussion 30 Apr 17:53
Quote

i thought Yuriko and annoying kuhai got together, i was scared for a sec

started punching pillows after this chap