^ This just killed me.

Can't believe it's over, everything about that last page was perfect! More high-school series should seal their final panel with a domestic fluff plus semi-title drop combo, it's just very nice.

Finally, something to fill the Kami eshi-shaped hole in my heart has appeared. Safety Warning: Do not use your ex-wife as a Ring-con, squeezing too hard may result in both physical and psychological injuries.

So Shimamura lets Adachi ramble on for a long while without interjecting (or perhaps even listening), then says that one callous thing and ... hangs up. I realize Shimamura is likely annoyed or even freaked out by Adachi's massive breakdown (who wouldn't be), but I thought she liked Adachi enough to at least try to understand what the heck is going on. So something like "Hey, are you done? Can we talk for real now?" Or maybe "We'll talk later once you've calmed down a bit,." Those would still be very Shimamura-like responses and show that she has it together.

A level-headed Shimamura is fine with me. A heartless Shimamura... not so much.

The thing is, those two options would require Shimamura to actually address the issue of Adachi's breakdown, which is asking for a bit too much given her own difficulties with facing anything remotely complicated, hard to blame anyone here.

Still, it's one thing seeing it written, but reading that "What a pain" in manga form hurt. I understood Adachi's immediate need to puke afterwards.

Oh~, so it's from the same author as "Even If It Was Just Once", both the character design and the tone feel pretty different, but that makes me appreciate their new approach even more!
Anyhow, I really hope it's suicide, since it would be very interesting to see MC have a breakdown over the idea that a denizen of 'Reality' could be unhappy enough to plan their own death.

I've played so much Library of Ruina that my first thought upon seeing the bookshelf of General Works fall was that it would transport them to a world full of literary monsters, but this doesn't seem to be that kind of library. 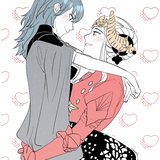 I like how there's no punchline, she is just happy.

In every repetition of the pattern, closeness and distance take on new meanings, contextualized anew by Takamine and Sakura's experiences with each other, their memories and expectations, and also made more meaningful for us as we grow to know them better. And this itself ties into Sakura's gushing about the brilliance of books with subtle foreshadowing that take on new meanings, new secret signals with each read, and sequels to them that hint at shared universes and larger patterns without ever spelling them out, because magic shines best in ambiguity. Every aspect of the tale perfectly coheres, every element deployed in perfect concert, creating constellations of emotion that fascinate effortlessly, a naturalism polished so well as to become a dense, organic cosmos of its own- I adore the girl who seems to have a quiet eye of her own on Takamine, surrounded by knowing friends (one of whom seems quite similar to Haru of Haru to Midori fame, making Sakura's subtly-shared-universe comment even neater). All in all, a brilliant oneshot from a master of the craft. I hope we can see more of Fukaumi's work in the future.

This, I adore the way this one-shot handles the dichotomy between boring moments that go on in repeat versus those unique experiences that Takamine is looking for.
For starters, the characters meet during their daily trip home out of simple coincidence. It was their routine that resulted in that meeting, and even after becoming friends their interactions are built upon the fact that said routine is supposed to continue, since the obligations of school won't disappear together wih the need to travel through public transportation from one day to another.

This means a lot when you take into account that Takamine and Sakura's train schedules align only thanks to the fact that the former quit volleyball, were she still part of the volleyball club she would be leaving school too late to commute together with Sakura, which paints a suprisingly optimistic picture of the way external pressure from society influenced her decision to quit in the first place.
In this context we are presented with Takamine's ordeal: Her environment won't allow her to interact or engage with it due to an apparent lack of emotions, but she's internalized these criticisms to such point that even when she's alone she won't try to do anything without "liking it". A perfect example of this mindset is how Takamine doesn't bother to read her book at first and instead merely flips through its pages, not because she thinks it's boring, rather, her conversation with Sakura reveals she did that because she sincerely believed the book would be unable to make her feel what she was looking for.

What I'm trying to get at here is that is that this cute romance plot is paradoxically kickstarted by two elements straight out of a Kafkian nightmare, a medium that forces the character to go back and forth everyday between her home and a stage where she is unable to fit in without anything ever changing (the train), and a source of attempted self-comfort that only serves to remind this character of how incomplete her integration into society will always be (the book). But then it's all subverted through the power of perspective.
Sakura convinces Takamine to give "Night View" a chance, and despite both the book and the train being the same, she starts to appreciate them anyway thanks to the way Sakura's presence motivates her to keep trying things despite initially giving up on herself, thus turning the routine of commuting back home she used to find dull into something she looks forward to through her own personal change (literally having her hold a book named "Yearning" for this scene was going a bit too far, but I appreciate the visual metaphor nonetheless).

All in all, the story has very sweet theme of how even if the world around you backs you into a corner and it seems like your only choice left is to let indistinguishable days pass and blend into each other, there's always hope you will find a reason to look forward to 'tomorrow' in the end, as shown by the characters' simple promise to see each other again the next day.

This is very much contemporary, everything from the art style to the fonts used on the cover, are you saying its old school because the linework looks hand drawn rather than digital? I’m fairly certain this literally just got released.

The style is as modern as it gets, but I understand their confusion considering how the notorious usage of chalk patterns for shading on the characters as opposed to reserving them for backgrounds, combined with the rather low noise-reduction/anti-aliasing on the inking, gives this a "rough" vibe that could make someone think of old-school works.

Don't get me wrong though, those details add a nice flufy vibe that makes me love the art. I'm happy for how honest they both are about giving and receiving comfort.

Thanks a lot for translating this blessed extras.
That last kne was pretty kinky (//ω//)

It was 21 chapters for us, but only one summer for the characters, so I think we can cut her some slack

This is such an important point honestly, I just finished rereading the story yesterday and I must say it functions a lot better when you can read all chapters in a row, since you get a sense of how absurdly fast and hectic everything was for Shizuku.
Girl just went from planning to kill herself due to the sheer guilt of doing something bad back when she was a literal kid to being manipulated into dating someone she originally disliked to finding out that said person was actually trying to make sure she didn't commit suicide from the beginning to facing the very classmate she had regretted bullying every day for the past five years just to get insulted for apologizing AND THEN she discovered that her not-girlfriend is about to die soon on top of finally noticing the emotional burden her depression had signified for the rest of her family ever since the incident, all of this in around three weeks of what was supposed to be fun summertime (not even Kagerou Project could have created such a rollercoaster of a summer).

I'm sincerely proud of Shizuku for realizing it this soon, this manga rarely gives her enough time to try to process or even figure out her own emotions, so I thought she would only understand the fact that she loves Kaori once she was already on her deathbed.

Seeing kid Kai gaslight everyone up to an adult teacher was hilarious, I must say I'm looking forward to any future backstory chapters.
While I understand the complaints about their backstory being too over the top to be effective from a narrative perspective, that's just the manga in a nutshell imo. People "die" by the dozens in increasingly complicated ways with visual effects on the level of a Slasher movie while the protagonist's sole remaining braincell rarely helps because it's busy recalling forensic knowledge most of the time, not exactly the formula for something meant to be taken 100% seriously.

So I think the zanny backstory fits this manga perfectly.

While asking a friend you randomly bumped into and already freeloaded off previously to adopt you seems like a considerable red flag, specially given how unapologetic she is about it, I'm only really worried about it from a financial point of view.
Lovey-dovey couple's bonding time-wise, it's obvious from Ruriko's horrified reaction when Kurumi asked her to sit with them that if Rio got in the way of their relantionship, the first one to find trouble with that would be Ruriko herself, so I don't see any need to panic about the addition of a "third wheel" in this case.

Amazing doujin, almost died from cuteness overdose while reading, but it was worth it. I love how in the end Ichigo just gave up on questioning the situation and went straight to handing out headpats instead, she's learning.

While I don't have much faith in her being actually evil either, I do hope we'll get to see more of Lapis' (dis)organization methods in the future, ADHD Villainess x Overachieving OL is an oddly specific combination I didn't know I needed before.
Anyway despite how generic everything else is, at least their relationship seems interesting, MC is a lovable mess with even lower self-esteem than Gacha luck, and the way the story frames her interactions with Lapis makes it clear Mitori would have clung to her for the simple fact that she gave her a bit of acknowledgement even if the misunderstood, hard-working villainess had happened to be a 100% unambiguously evil person. It's more of a toxic dynamic I would have expected to find in a manga with the "depressing as f*ck" tag honestly, but I'm interested in future developments nonetheless.

Judging by how they seem to be famous now, the flirting probably counts as fanservice for the other girls.
I can imagine them saying "Sasuga handsome duo" while sticking their ears to the door. 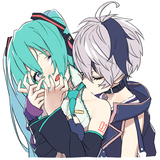 This is so cute AND hot, what a perfect drawing! 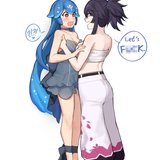 I love this manga, it's always cute to see Kurumi swooning over her wifefriend, hopefully Ruriko will start being honest with herself too rather sooner than later. 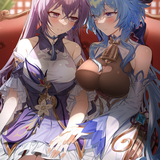 ^ Ganyu's right hand is on Keqing's butt, judging from the position and the blushing.