Oh man no no no i knew this would happen yet i hoped it won't oof poor asaka :((

Ah i see what u did there lol

Swifftyz
The Girl Through the Viewfinder discussion 23 Mar 23:49
Quote

Swifftyz
Run Away With Me, Girl discussion 05 May 21:03
Quote

I think he is gonna hurt her again. She's wounded his pride as the "woman-getting-alpha-male" he sees himself as, and in the worst way possible: she plans to leave him for another WOMAN. That steel grip on her arm is pretty tell-tale. I hope Maki beats his ass though. I doubt the guy would know what to do in the face of a woman who is openly defying him in a menacing way. He'd revert back to the simpering little boy that he really is.

Ugh what pride? If he had “pride” to begin with he would’ve never hit her just because he had some ptsds about girls bullying him, he never acted like a man of pride so why should he now? Tazune has been so full of himself lately most likely because he only hurt women and never really actually faced someone to put him back in his place, Surprisingly.

Swifftyz
Until the Next Station discussion 10 Dec 01:36
Quote

Swifftyz
Until the Next Station discussion 10 Dec 01:36
Quote

More, more, more, MORE! i've never enjoyed a 4 pager so much in my life

Its the start of the harem maybe? lmao

Its been ages since the last chapter i need more....

This one is really really good

Swifftyz
Bloom Into You discussion 01 May 18:58
Quote

Still doing cliffhangers huh, this is the happiest chapter i've ever read

if this turns into one of these serieses that dont get a New a chapter regularly im gonna be so depressed, because i really enjoyed just 1 single chapter and i want more!!

Bro why is she declining uta's feelings? she knows her husband is cheating and yet she continues to be loyal to him? im sorry but that just pisses me off man Uta desrrves her tbh more than her stupid brother who probably just married her because his mom forced him to lowkey.

Lol what? Just because your husband cheated, doesn't mean you have to fck up your life, too. Maybe it comes as though she's brushing Uta's feeling but give Kaoru a break. She's been through hella lot.
-husband cheating
-accident
-Uta's moving
-Uta's confession

Things are piling up so give her some time to sort it out. And Kaoru has the right not to reciprocate Uta's feeling especially if she only sees her as a sister or she's not into that(would be great if she feels more tho), even Uta came into terms with it already that's why she has decided to move on. It's not just about Uta, BOTH of the girls deserve better.

Yeah i somewhat agree with you, but come on theyre perfect together although for karou to understand and accept her feelings is highly unlikely i still want the ship to go on.

Bro why is she declining uta's feelings? she knows her husband is cheating and yet she continues to be loyal to him? im sorry but that just pisses me off man Uta desrrves her tbh more than her stupid brother who probably just married her because his mom forced him to lowkey. 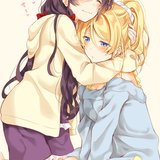 I believe we have ourselves a third wheeler

Isn't going to be dangerous if the fingers become paws?

Swifftyz
The World Exists for You discussion 08 Mar 20:48
Quote

Really loved it, hope to see more of this

the author really knows how to test my nerves i been waiting for ages now u gonna make wait more? unfair :(

Swifftyz
All of Humanity is Yuri Except For Me discussion 02 Mar 19:25
Quote