I liked the mini S&M tutorial at the end. It was cute. I wonder if Mira is actually into that stuff, or did she just do research for her own do diligence

AkinomaHNU
The Ends of a Dream discussion 28 Jul 16:38
Quote

I'm already afraid of my own inevitable demise, I don't need this. In fact, I think we should have a tag for stuff like this on the site. As someone who is absolutely terrified of the finality of my own death, and by extension, growing old, I would rather not read stuff like this if I can avoid it.

Contributing to the tag discussion, how about an author tag? Something to note that this author usually writes about heavy, dark, tragedy topics. Sudou Yumi's Please has comments about how the story is depressing af, but including a Depressing as Fuck tag would spoil the story. Having read her other works, I think one should come to read Sudou Yumi expecting surreal, unexpected, tragic elements, just like how one come to read Nagata Kabi expecting relatable, depressing subjects, or come to read Kodama Naoko expecting service-y scenes. Maybe something like "Sudou Yumi, beware!"?

My brain at 4am translated that into
Beware of Author 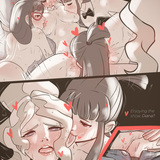 This kind of reminds me of that one DiAkko fic that involved diving into each other's mindscapes (at two different occasions) and they meet multiples with different personalities/ traits of the other person. 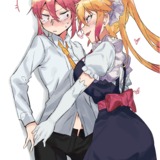 ^^ considering that thing Iruru did to Kobayashi when they first met (without Tooru around)... I'm pretty sure that it's Tooru that would be riding Kobayashi.

But this is Kobayashi we're talking about. She ain't lettin' it happen 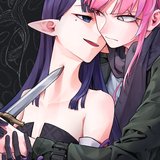 AkinomaHNU
I Went For a Home Visit and Found Out My Student’s Mother Is My Sex Friend From My School Days discussion 19 Jul 15:22
Quote

I guess that's one way to have oyakodon

AkinomaHNU
The Results of My Author/Classmate Discovering My Yuri Obsession discussion 16 Jul 22:55
Quote

What a place for a series to go on break ...

Dang curve it is! "orz

AkinomaHNU
Make the Best of It: Advance or Fall Behind discussion 16 Jul 18:28
Quote

The very definition of the "just do it!" meme: manhua author form

AkinomaHNU
A Story About Being Loved By A Junior You Don't Get Along With discussion 16 Jul 12:34
Quote

So senpai’s a dumbass type, she clearly already knows from the change of using Kazu-San -> Senpai when she never said anything about being her upperclassman

Isn't that an obvious assumption due to her sister's interference?

That may be the case but she never specified what year she's in and that doesn't rule out the possibility that she's from the same year instead of a senpai.
Not sure if I can explain it right but it's vaguely hinted that the kouhai at least figured out who "Kazu-san" really is and has been interested in her for a while now.
I remember the older sister thinking something like "so that's what she's (her sister) like at school" implying that there's a big difference in how she acts at home and in front of the disciplinary committee senpai.
And if memory serves, there's also one or two panels somewhere that show the kouhai's expressions where you could see her showing interest in said senpai at school.

There's also something about the kouhai's reactions in school and in the café that tells me that she does know. Especially the part where she mentioned that senpai was avoiding her even though "Kazu-san" was being hospitable in the café.

I'm not at all surprised by Ayumu's yan side popping up like that. Kasu-kasu and Yuu are both idiots XD

AkinomaHNU
You are totally in love with me, aren't you? discussion 14 Jul 03:47
Quote

I dunno... I've been getting those vibes since chapter 1

The moment of realization finally dawns on her. I LOVE IT!!!

AT LEAST WAIT UNTIL AFTER YOU'RE MARRIED!!!

AkinomaHNU
That Time I Was Blackmailed By the Class's Green Tea Bitch discussion 30 Jun 02:28
Quote

I love how quick on the uptake Tongtong is. Being able to witness a baby gay's awakening and the subsequent panik is always a pleasure to see 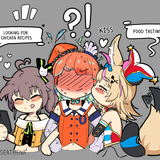 Tenchou being treated as food always crack me up until I remember that Kiara can't revive if she gets eaten...

why is onee sleeping in a crib

AkinomaHNU
That Time Only Akari Got Reincarnated as a Slime discussion 19 Jun 05:24
Quote

When was the Akari bullying funny? I mean, what time in prehistory?

It just turned into some sort of running gag at some point. She's supposed to be the MC but her "presence" was purposely made "invisible" so they constantly tease her about it.
I'm guessing it's a satirical take on how a lot of MCs are the copy-paste sort??

I don't really get it but Akari's reactions to the teasing is pretty funny sometimes. I do feel sorry for her but it's precisely because I feel sorry for how she's treated that I end up laughing.

Man the two of them are still as wonderful as ever, but gods, I don't have any patience for people that fans the flames of insecurity...

I'm not that much of a fan either but I think it's great that there are people around them to point out those things that can make those two doubt aspects of their relationship. Being able to see them find their way around those insecurities and grow closer because those things are there is a gift from above

Is it weird to feel relieved that Sal's characters are as Toxic as ever? Purely whoesome works from her (that are longer than 10-15 pages) make me feel like something's gonna stab me in my sleep

I don’t know why, but they both remind me of aunts on opposite ends of the spectrum. The lesbian unmarried double income aunt who says cool shit and the nosy “WHERE’S YOUR BOYFRIEND ARE YOU MARRIED YET” aunt.

Oh gosh, NOOOooooooooooo
The thought of a couple like that existing in itself sends shivers down my spine

AkinomaHNU
The Gyaru is Curious About the Otaku discussion 13 Jun 02:28
Quote

So this is what happens when you burn sugar... It could have turned into sweet caramel if you picked a better time to pull it out of the heat

(wait. why does the comma even have brackets?)

I believe it's because the titles has different meanings with and without it.
"Well Done, Pervert" is saying "well done" as in "good job" to the pervert. "Well Done Pervert" is using the term "well done" to describe said pervert. "Well done" being a reference to a way to prepare certain foods is, I think, a reference to the term "cooked" which can mean to be in a dangerous or otherwise bad situation.

but doesn't へんたいよくできました only translate to "Well Done, Pervert" and not "Well Done Pervert"

My guess is that there's probably a double meaning in the original title, and double meanings don't ever translate well, so this was what they came up with. I wouldn't know for sure without asking them.

From what I know,「へんたいよくできました」can be translated as either "Well done, Pervert" or something like "(we) did/do perverted things". Depending on which angle you look at it from, it can go both ways and still make sense in the story's context.