Lol of course Murata would be all for Vi

Linterdiction
The Reason Why I Go to the Dentist discussion 03 Dec 21:02
Quote

I love that the comments are all just gay stories about crushing on dentists, I had no idea this was such a thing but maybe I should have guessed that having certain feelings about stern or warm older women efficiently putting their fingers in your mouth and telling you what to do would be A Thing with lesbians lmao. 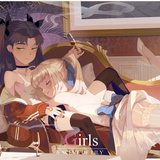 Uhhhh, look at the proportions of Rin's head to her body, they're super fucking cursed. her torso is fuckin uhhh. two heads tall?? and her right forearm is extremely long. Ahhh, it's so cozy and intimate. Something about making food for other people, domesticity... The harmony makes me feel warm inside. This is a perfect manga for a cold and rainy winter. And I love that we're just starting to get gay hints, too.

If it goes the way I think it goes, I'll be even happier. The, "not just ambiguously gay and stagnant, but we wait a reasonable amount of time for the characters to get attached before the romance starts" kind of setup is my absolute favorite, and it goes so well with this. I've been needing a hit of that ever since Even if It Was Just Once ended.

This is an incredible doujin. The art on this is fantastic. The characters are on point. And the depictions of sex, and what feels good and how, is all just--so, so good, and it feels real. This kicks ass.

Does anyone actually get anything out of waiting for each page to load like you're on dial-up because the images are roughly the size of a highway billboard?

Yes, actually. The fact that the images load slowly forces me to take more time with each one, and gets me to think more. Between that and the slow pacing of chapter releases as TL teams go through them, I feel like I remember stories more, they become more of an experience. It's something that's kind of hard to come by on the modern web, but it reminds me of waiting for old anime episodes to download back in the day. Or playing a videogame over the course of a few months instead of binging it, because I could only get 2 or 3 per year. If I had to explain it, it's like making food yourself instead of getting takeout.

Yeah, I recognize this basically makes me the person from this XKCD, but god damn it I like it how I like it!

Speeeeaking of which (smooth transition), I like how Tachibana ends up at tickle play because she's not as comfortable with pain. And how the manga recognizes that, when brat taming, a frontal approach is the height of folly, while a flanking maneuver can catch her totally unprepared. Their dynamic is more interesting than the main girls. I've been struggling to place what the author was doing with Sulfur for a long time, but now I get it and I'm even more in awe of this story.

So I really like how coming to terms with herself has taken away some of Sulfur's jagged edge. She always seemed scrappy, bad-tempered, and like she was kind of burning herself up just being around. She seemed really distant even from her own team, like their earnestness and good-natured outlook ran up against her. She had so much aggression and anger, and it was just constantly leaking out of her.

But look at how she changes when she fully embraces her competitiveness and drive to fight. Her scrappy nature becomes very focused on the actual fighting, and the joy and liberation of it, and so she has room to let her allies get closer, and to be more emotionally connected to them.

The same way Azul's love of pain muddled her ability to fight for victory and her beliefs, Sulfur's love of conflict made it difficult for her to connect with people. And in both cases, embracing the deeper truth of that part of themself let them tap into it in a beautiful and directed way that is healthy and productive rather than maladaptive or destructive. I was having a hard time figuring out how Sulfur fit this story thematically, because she doesn't seem very kinky or sexual about any of this, but now I get it. Her arc speaks to something that lies at the heart of BDSM, a part this isn't even necessarily sexual.

See, when you set aside all the fun things that stand out to people--the bondage, the power exchange, pain play, all that kind of stuff--at its core it's about reaching deep into your heart and letting out all the dark and scary things there in a safe and healthy way. Maybe you have trauma of guilt, and messing up in a scene brings it up all the way up to your skin, and being punished and forgiven absolves you and gives you deep relief. Or you've been forced to bottle up pain and smother your anger for the sake of your own safety, and the chance to be the one in control, to satisfy that urge to hurt someone with a partner who enjoys it and encourages it, burns away at the sense of helplessness you've been carrying, and provides relief for the anger you've had to turn in toward yourself. And you'll notice that the emotions I've described aren't inherently sexual. Indeed, many professional dominants have strict no-sex rules, and are in the business of providing their clients catharsis through their expertise; it's about an emotional release, not a physical one.

So, bringing it all back to Sulfur. We don't know her full backstory, but it's clear that some form of anger, which she's had to suppress as a member of society and as a high-profile magical girl, has been festering inside her. But through their scene together, through challenging her and goading her and creating space for her, Baiser dig deep to the bottom of that desire to fight with everything she has and win, to be strong enough, and bring it fully to the surface. She helps her find emotional release and actualization, and that is what the La Verita form is.

As a side note, this all makes me even more excited to see what happens with Magenta, who has a strong sense of empathy and willingness to go with the flow, but seems to be kind of a pushover not fully committed to fighting. This story is bonkers. 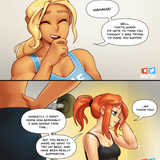 Damn I love this artist and this couple. One of my favorite ongoing gay things rn.

Linterdiction
The Promiscuous Relationship of the President and Vice President discussion 22 Nov 20:47
Quote 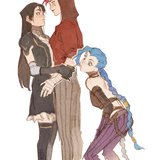 she was really enthusiastic about that water, wasn't she? I understand people get excited by all sorts of things, but does that really do it for her? Okay but the really thin thread of saliva and the puffy breaths totally make this. The little breath clouds in particular, like how do they make everything 90% hotter?? 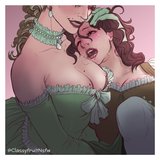 Inject this into my veins dude

Linterdiction
A Collar Only For You discussion 13 Nov 01:19
Quote

As a wise man once said, “Good lord what is happening in there?”

some incredible hot girl sadist eyes. Honestly I’m just reading this story for how charismatic Mai-chan is and the incredible things the artist pulls off to make her look dark and seductive. It’s amazing.

I love that this is an adult story with a lot of verisimilitude that doesn’t wrap up neatly. It makes me think of how I’ve had therapists that were like, “we’re gonna get in there, open things up, I’ll help you hold them, and then you leave the session feeling comforted,” and therapists who were like, “our work in here is to make you productively uncomfortable and then leave you there.” In the former method, the work is done in the session; in the latter, it’s done as you hold difficult feelings and process what happened. I think this story is the latter type. 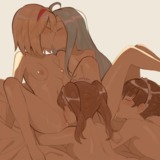 Hard agree on all these comments about moresomes. The possibilities leave you a lot to think about.

Just re-read this again, really slowly, and it's even more incredible than I gave it credit for the first time. I got a little distracted/cut off from the story Mira was trying to convey when it seemed like Mio was scared in a not-fun/sex/healthy way and when they didn't set up, like, a safe word and other safety stuff to begin with, but this time I could see how it really was safe and healthy, and follow along with the intended story. I definitely want to write out what I saw/how I thought of this because the way Mira advances the story is actually so incredible. There's not a moment of waste, and every moment in every scene (and every scene) ties back to the love story.

Oh? Ohoho? Is that the scent of drama and a haunted past on the wind? Is that the beginnings of a “cool older lady experiences healing as she slowly opens up to innocent and cheerful dork” on the horizon? As in, my favorite trope?

I have to get popcorn for this!